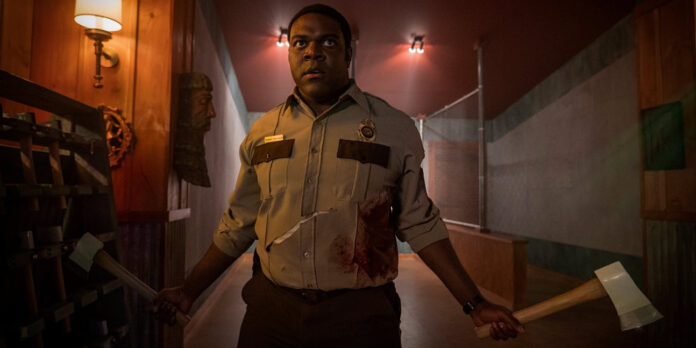 Truly good video game-to-film adaptations are exceptionally rare. Most of the time, we end up with some exciting imagery, and that’s about it. For all that video games have gotten more cinematic over the decades since Super Mario Bros. was introduced to the world, writers and directors have struggled with wrangling storylines and characters built for interactivity into an easily digestible cinematic package. Enter Josh Ruben’s “Werewolves Within.” Based on the 2016 VR game, the film takes a simple premise, drops in a murderer’s row of great character actors, and lets them run wild, proving that the more loosely you adapt a video game to film, the better your film will be.

The premise of “the Werewolves Within” game is simple: You’re a villager in a medieval town, and one of the residents is a werewolf. By sitting and talking with other players, you have to figure out which one of them is the werewolf. “Werewolves Within,” the film, smartly adapted by Mishna Wolff, takes that premise and moves it to the present day: Beaverfield is a quiet, remote little town populated by a bunch of kooks. Forest ranger Finn (Sam Richardson) is new to town, assigned there as a punishment of sorts to oversee the building of a new oil pipeline. On his first night there, though, a massive snowstorm knocks out the power… or maybe that has more to do with the claw marks in the town’s power generators, claw marks that look too large to have been made by any regular animal. After a dead body is found too, the whole town (or at least, the seven townspeople we’ve been introduced to) ends up in the local inn. The accusations fly fast and furious once an environmental scientist in town to fight against the pipeline announces that the hair she grabbed off the dead body isn’t entirely wolfish in origin. Instead, someone in town is a lycanthrope.

It’s a time-tested formula, the all-star murder mystery, and “Werewolves Within” twists it just enough so that it feels fresh. Of course, the addition of a werewolf would be enough, but on top of that, Ruben has assembled a pitch-perfect ensemble. Richardson and Milana Vayntrub as cute postal worker Cecily are hugely likable as the nominal leads, but George Basil, Sarah Burns, Michael Chernus, Catherine Curtin, Wayne Duvall, Glenn Fleshler, Harvey Guillén, Rebecca Henderson, Cheyenne Jackson, and especially Michaela Watkins are all having a blast one-upping each other with comic business. Watching this coterie of comedians riff off of each other is hugely entertaining, and their energy is infectious.

The cast can’t just riff for the whole movie, especially since the nature of the genre demands that we watch most if not all of them die one by one. Thankfully, Wolff has scripted the back half of the screenplay more tightly, meaning that there’s a more conventional joke structure but also better jokes. Unfortunately, though, she fumbles a bit at the film’s conclusion. She and Ruben stage a highly satisfying climax that ties up nearly every plot thread and has a lovely message about being good neighbors and getting rid of the forces that threaten to tear us apart by sowing distrust and division…and then stage another one to serve as the actual ending, one that leans into the horror-comedy’s horror side much more than anything else in the film. There’s nothing inherently wrong with this, but neither Ruben nor Wolff seem all that interested in the horror elements aside from the last ten minutes or so. The very few “jump scares” are heavily telegraphed and staged more to amplify the comedy by playing with genre tropes than anything else. There is some light suspense throughout the film, but horror fans may find themselves a bit disappointed by just how unscary the film is.

Those reservations aside, “Werewolves Within” is still a howlingly funny time at the movies. Ruben is clearly excited by his cast, and he stages nearly every scene so that we can watch as many of them as possible. The editing by Brett W. Bachman has some fantastically funny beats, and cinematographer Matthew Wise gets all that he can out of the snowy vistas and nighttime lighting. It may lack great scares, but who needs jump scares when you’re having this much fun? And after the past year and a half, we all deserve a little fun.