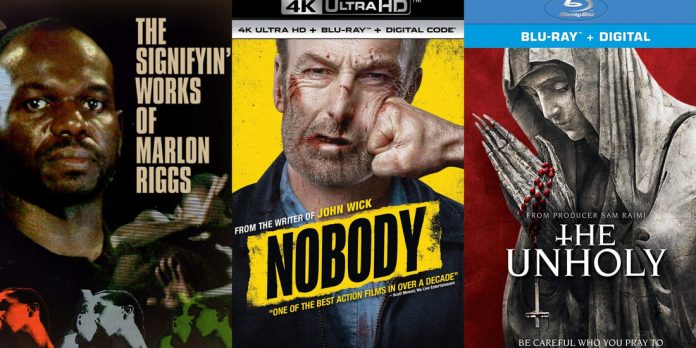 It is a genuinely stacked week for releases from boutique labels, primarily underseen or underappreciated films getting their debut to Blu-ray. Plus, some new releases and a few box sets!​

Also, from Severin Films this week, we have Blu-ray releases for the films “Strike Commando” and “Strike Commando 2,” from 1986 and 1988 and both directed by Bruno Mattei. Both feature new 2K restorations, as well as the theatrical and extended cuts of each film. They also each feature interviews with their respective casts and crews.

This week’s final release from Severin Films is the 1982 film “Invaders of the Lost Gold,” directed by Alan Birkenshaw. This includes a new 2K restoration of the film and an interview with the director.

Arrow Video has a couple of releases this week. The first (and biggest) is the “Years of Lead: Five Classic Italian Crime Thrillers” box set, which features five films on three Blu-ray discs. The films are “Savage Three” (1975), “Like Rabid Dogs” (1976), “Colt 38 Special Squad” (1976), “Highway Racer” (1977), and “No, the Case is Happily Resolved” (1973). Each film is restored from its original camera negative. Also included are tons of interviews with the casts and crews of each of the films.

Kino Lorber is releasing a few 90s comedies on Blu-ray this week. First comes the 1998 stoner comedy “Half Baked,” directed by Tamra Davis and starring Dave Chappelle, Jim Breuer, Harland Williams, Guillermo Diaz, and Clarence Williams III. It includes an audio commentary track with Davis, deleted scenes, and featurettes on the movie. We also have the 1991 film “Career Opportunities,” directed by Bryan Gordon and written by John Hughes. The film stars Frank Whaley, Jennifer Connelly, and Dermot Mulroney. Lastly, we have the 1993 film “CB4: The Movie,” also directed by Tamra Davis and starring Chris Rock, Allen Payne, Phil Hartman, and Chris Elliott. This release includes a new audio commentary track with critics Alexandra Heller-Nicholas and Josh Nelson and a new interview with Davis.

There are a couple of new Blu-rays from Scorpion Releasing this week. One is the 1985 Robert Altman film “Fool for Love.” This film stars Sam Shepard, Kim Basinger, and Harry Dean Stanton. The other film is the 1964 surf comedy “For Those Who Think Young.” Directed by Leslie H. Martinson, this stars James Darren, Pamela Tiffin, Paul Lynde, Tina Louise, Nancy Sinatra, Bob Denver, Claudia Martin, and Woody Woodbury.

​The Warner Archive Collection has two new releases this week. First is the 1950 film “Chain Lightning,” directed by Stuart Heisler and starring Humphrey Bogart and Eleanor Parker. The other is the 1963 musical “It Happened at the World’s Fair,” directed by Norman Taurog and starring Elvis Presley, Gary Lockwood, and Joan O’Brien.

This week’s other Criterion Collection release is “Visions of Eight,” an anthology collection of short films depicting the 1972 Olympics in Munich by eight filmmakers: Miloš Forman, Kon Ichikawa, Claude Lelouch, Juri Ozerov, Arthur Penn, Michael Pfleghar, John Schlesinger, and Mai Zetterling. This is a new 4K digital restoration. It includes an audio commentary track, a new documentary on the film, and a short promotional film. This film was previously included in the “100 Years of Olympic Films” box set released by Criterion.