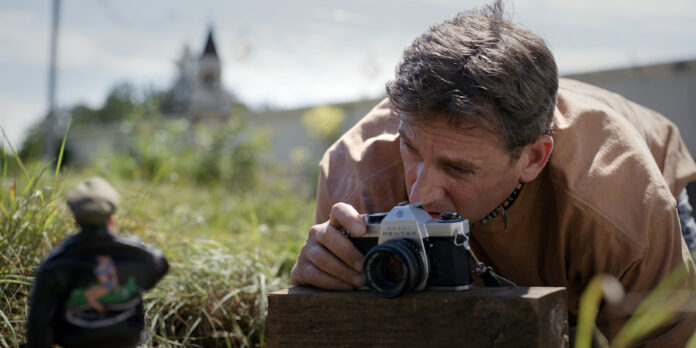 THE STORY – When a devastating attack shatters Mark Hogancamp (Steve Carell) and wipes away all memories, no one expected recovery. Putting together pieces from his old and new life, Mark meticulously creates a wondrous town where he can heal and be heroic. As he builds an astonishing art installation—a testament to the most powerful women he knows—through his fantasy world, he draws strength to triumph in the real one. In a bold, wondrous and timely film, Welcome to Marwen shows that when your only weapon is your imagination…you’ll find courage in the most unexpected place.
​
THE CAST – Steve Carell, Leslie Mann, Diane Kruger, Merritt Wever, Janelle Monáe, Eiza González, Gwendoline Christie, Leslie Zemeckis & Neil Jackson

​This existence of “Welcome To Marwen” provides an interesting argument when it comes to appreciation of narrative and documentary storytelling. Both mediums can utilize different methods to tell their stories, but it’s quite fascinating when similar subject matters are handled in vastly different manners. The documentary this film takes heavy inspiration from, “Marwencol,” does not possess the bells and whistles of advanced technology. However, it does manage to tell an intriguing story by placing its audience in the authentic world of its subject and allowing the themes to naturally flow from his perspective. To say that this movie is not nearly as successful is an understatement. What it does provide is a lot of wasted potential with messy execution by director Robert Zemeckis (“Flight” & “Allied“)

At the center of the film’s story is Mark Hogancamp (Steve Carell), a man struggling with anxiety attacks and prescription drug addiction following a brutal hate crime perpetrated by five men because of a comment Mark made insinuating he cross-dresses. In an effort to cope with his disabilities, Mark creates the town of Marwen in his yard, a fictional Belgian village during WWII that is populated by dolls that bare a resemblance to the people in his life. As Mark struggles with his memory loss, the frustrating affection for his new neighbor (Leslie Mann) and the stress in the lead up to both his attackers’ sentencing and upcoming art show, the dolls of Marwen come to life and play out scenarios that inform Mark’s emotional state and the difficulties he’s going through.

The talents of Robert Zemeckis are undeniable. The list of credits ranging from “Back to the Future” to “Who Framed Roger Rabbit?” to “Forrest Gump” indicate a filmmaker with an incredible eye for not only storytelling but also employing innovative visual tools used to aid in that endeavor. Honestly, some of that potential is gleamed at here with the exuberant fantasy sequences that take place in the miniature village that are a showcase for some impressive effects. At the same time, one can’t help but feel that it is employed for scenes that add to an irregular pace and an emotionally shallow tone. The dolls themselves also fall victim to the uncanny valley at times, something that Zemeckis’s technology still struggles to escape from. One can see the potential in his ideas, but they are used to execute some rather shoddy storytelling.

However, the biggest issue comes from the way that Zemeckis and his co-writer Caroline Thompson have structured this screenplay. Often the film’s metaphors and analogies are blatantly apparent, and to see such obvious themes played out in such a blunt fashion makes for a story that never fully engages you. The film never manages its tonal shifts that well and the intimate story it is trying to craft that focuses on a man desperately trying to cling to stability and preaching acceptance of the outsider never comes through. The film instead is a jumbled mess of mostly underdeveloped characters servicing a story that doesn’t quite feel in control. This especially makes me feel bad for Thompson, who has written modern classics I adore (“The Nightmare Before Christmas”), but here feels just as lost at sea as her director.

Carell’s film career has always been one that is, to put it politely, inconsistent. There are certainly some interesting performances he’s given (“Foxcatcher”) but many of them struggle to fully connect (This year’s “Beautiful Boy“), particularly when the dramatic hyperbole of some of his characters sound more like Michael Scott hysterics. Unfortunately, Carell falls victim to that here as well, and his Mark never truly feels like a grounded personality. It all feels like a very surface level portrayal that struggles to mine anything beneath. Carell’s attempts to broaden the horizons of the character never come to fruition and as the film’s anchor leaves much of the emotional resonance to be desired.

Sadly, Carell is not the only member of this cast that does not live up to his potential. However, the more consistent complaint with the ensemble is just how shallow and poorly written their characters are. There is a very talented group of actors apart from Mann, herself given yet another thankless role. Merritt Weaver, Janelle Monáe, Eiza González and Gwendoline Christie are all given what feels like background characters. Some are glorified cameos. Given that they also play their Marwen counterparts, it becomes even more frustrating that the female characters feel so underdeveloped despite having twice the opportunity to explore their relevancy. It is not so much a fault with their performances because they do the best they can with the very limiting material given to them.

One could give the film a lot of credit for attempting to give a kind of authenticity to the world of Marwen so it can accurately depict the emotional state of its characters. There is something admirable about that potential. Still, “Welcome To Marwen” never finds the right footing to successfully pull that off and instead clobbers the audience with blunt metaphor and a disastrous pace. Carell’s central performance is not endearing enough to captivate us, and the supporting characters are given so little that their impact is hardly felt. Even the film’s technical prowess feels stunted. If one wants to see an interesting take on this material, I cannot recommend the documentary enough. It is a far more rewarding experience despite having so much fewer resources.