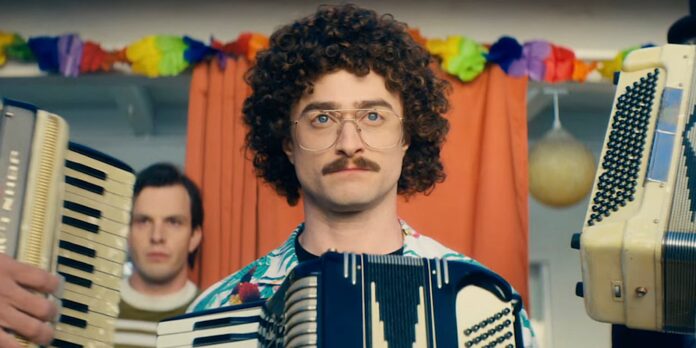 “Life is like a parody of your favorite song” are the words that begin “Weird: The Al Yankovic Story.” And indeed, the self-aware biopic is like a parody of Weird Al’s life, from his childhood discovery of the accordion to his fame in the musical comedy niche to becoming the global sensation he is today. Yankovic is a singer, musician, and actor known for his humorous songs that comment on pop culture or parody other tunes by replacing existing lyrics with his own. As a result, he was able to carve out his own place in music history, whether people took him seriously or not. Directed by Eric Appel (“The Office,” “New Girl,” & “Brooklyn Nine-Nine”), the original Roku film is every bit as weird and zany as you would hope that a film about Yankovic would be.

Appel and Yankovic’s screenplay takes one dramatic turn after another; as the film continues, it gets further away from the truth. However, from the beginning, it’s a highly fictionalized and exaggerated account of Yankovic’s life. As a child, Al is stifled by his factory worker father, Nick (an intimidating Toby Huss), and his mother, Mary (Julianne Nicholson), who would prefer him to be more normal than pursue a music career. Mary secretly buys Al an accordion with strict instructions not to let his father see or hear him play it. Over the years, Al becomes quite gifted at playing the instrument, eventually winning the admiration of his friends through his technical ability (not many people can say they prefer to play the accordion) and passion.

While the childhood section is certainly amusing, the film’s story truly picks up when it transitions to Al (Daniel Radcliffe) after he graduates high school and moves out to chase his musical dreams in a manner no other artist had ever done before. We see an exaggerated version of Al starting to write his parody songs and forming his band, rocketing to fame despite the improbability. The reason why the film’s manic energy and enthusiasm work so well is because of the go-for-broke work from Radcliffe. The film lives and dies by his work. He’s so committed to the film’s tone and completely throws himself physically and comedically into the role of Al Yankovic (as he seems to be in every role he takes), even learning how to play accordion (although he doesn’t sing using his own voice which is ironic considering how the film takes shots at the infamous lip-synching and storytelling blunders from “Bohemian Rhapsody”). Radcliffe’s performance is one of the best in his career as he manages to play Al believably with full conviction towards the movie’s humor while avoiding it being a mere impression.

Evan Rachel Wood matches Radcliffe in her hilarious portrayal of a ruthless, ambitious, and also heavily fictionalized Madonna. She plays the exaggerated role perfectly and has excellent chemistry with Radcliffe under Appel’s direction, as they wholly lean into the script’s more ridiculous moments. While it’s obviously a very fictionalized portrait of the Queen of Pop, she has created large shoes for Julia Garner to fill in the upcoming true Madonna biopic. None of the other characters get much development outside of these two. Still, it’s clear everyone involved is having a great time, especially Rainn Wilson as Al’s manager Dr. Demento and “Abbott Elementary” star Quinta Brunson in a brief turn as Oprah Winfrey (and countless cameos I dare not spoil).

Shot in only 18 days, “Weird: The Al Yankovic Story” is a feat of parody filmmaking that comes together impressively well, making it the best of its kind since “Walk Hard: The Dewey Cox Story” (sharing a similar sounding title is no coincidence). Appel’s film is stuffed with campy violence, celebrity cameos, and insider remarks on music and fame that come together for a rollicking good time. In the same way that “Rocketman” was the perfect biopic for Elton John, “Weird: The Al Yankovic Story” is as absurd, funny, and satirical as a Weird Al Yankovic biopic should be.