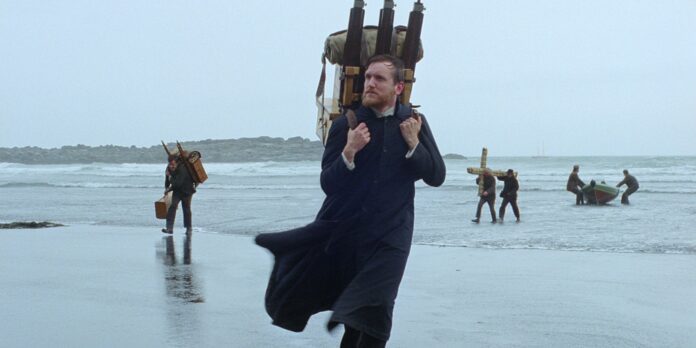 THE STORY – In the late 19th century, a young Danish priest travels to a remote part of Iceland to build a church and photograph its people. But the deeper he goes into the unforgiving landscape, the more he strays from his purpose, his mission and morality.
​
THE CAST – Elliott Crosset Hove & Ingvar Eggert Sigurðsson

Almost since cinema was invented, filmmakers have used the medium to express their faith – both celebrating it and questioning it. Icelandic native Hlynur Pálmason’s “Godland” takes the old crisis-of-faith narrative and mixes it with a critique of colonialism, specifically that of Denmark to Iceland. Pálmason describes it as both a love letter and a diatribe towards two countries he both loves and hates, one where he was born and one where he studied and honed his craft. It is a film of many opposing forces – man vs. nature, stillness vs. movement, idealism vs. cynicism, life vs. death – enough so that the film often feels as though it is at war with itself. But Pálmason’s singular vision largely keeps it afloat, even when his artistic pretensions threaten to overwhelm him.

In the late 19th century, young Danish priest Lucas (Elliott Crosset Hove) is sent by the church to take on a remote parish in Iceland (a Danish colony at the time), where he must supervise the building of a new church before the first snowfall. The journey there will involve working with locals who have a deep connection to the land in order to cross the treacherous landscape while a volcano is erupting. Lucas is a fish out of water – he doesn’t speak the language (and does not seem the slightest bit interested in learning), he has never ridden a horse before, and he insists on lugging around a camera to photograph the land and its people. Supposedly this is to get to know his new home better, but Lucas is wary, stand-offish, and dismissive of his Icelandic guides, even when just taking pictures of them.

Halfway through, “Godland” becomes a slightly different film, shifting focus from the cross-country adventure to life in the Icelandic parish that Lucas is meant to help build. Both halves would make a great film on their own, but the shift from one to the other is abrupt enough to make this film feel off-balance in a way that it takes quite a while to overcome. But it does overcome, in no small part, due to the sneaky deadpan humor of Pálmason’s screenplay, which takes great joy, especially in dancing around the language barrier between Lucas and the Icelandic natives. When his translator tries to teach him all the different Icelandic words for “rain,” Lucas gives up and says they should make up their minds instead of having so many variations. It is here, in Lucas’s dismissive attitude towards the Icelanders, that Pálmason does his best work in getting at colonialism’s heart of darkness: The arrogant belief on behalf of the colonizers that they are right and good in all ways and the colonized are wrong and bad in all ways. Despite his protestations that he wants to learn about this new land and people, Lucas never shows any signs of interest in actually doing so outside of the initial scenes of attempting to learn Icelandic vocabulary. When his resolve is tested, he breaks almost instantly, begging God not for strength but for help. And instead of strengthening his faith, his experience seems to weaken it, leading to a crisis of confidence that manifests as anger and violent outbursts.

Crossett Hove navigates Lucas’s arc well, but he is the only cast member who gets a full arc to play. The film’s overreliance on allegory reduces much of the film to an intellectual exercise, meaning that when, for example, Ingvar Sigurdsson’s Icelandic guide suddenly starts taking an interest in Lucas’s faith, we have little context as to why (outside of a too-long monologue that is essentially an allegory wrapped around a dream stuffed inside a fable). Sigurdsson absolutely nails the film’s climactic moment, but because the character is so underwritten, he has to do all the work of making it emotional through his vocal work and deep stare into the camera.

While Pálmason’s screenplay may lack in some areas, his direction more than makes up for it. Maria von Hausswolff’s stunning cinematography makes generous use of long pans that emphasize how the characters interact (or don’t) with the land, and the lush sound mix only adds to their impact. Pálmason also makes good use of Julius Krebs Damsbo’s sharp editing for some impactful smash cuts that take us through the seasons watching the Icelandic weather, while Alex Zhang Hungtai’s droning score adds intrigue. “Godland” is undoubtedly a worthy cinematic experience because of Pálmason’s artistry. It’s a disappointment, though, that sometimes that artistry gets in the way of the heartfelt connection with the characters that would make this a truly great film.