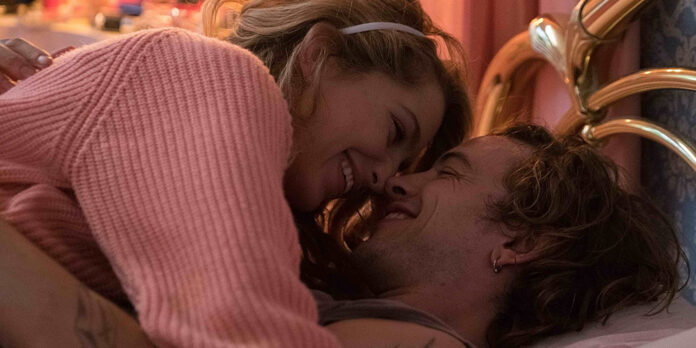 THE STORY – A valley girl and a punk rocker from the city defy their parents and friends to stay together.

5/11/2020
​By Sara Clements
​
​​Martha Coolidge’s 1983 classic, “Valley Girl,” starring Nicolas Cage and Deborah Foreman, introduced the world to the teens of San Fernando Valley. The eclectic fashion, lifestyle, and speech of the “valley girls” became a cultural phenomenon that surpassed the valley itself. Director Rachel Lee Goldenberg and writer Amy Talkington re-imagine this story in a more modern way, and as a musical. While it’s almost shot-for-shot the same as the original film, the oftentimes dull romance is elevated in this remake thanks to a more charismatic cast, a rock ‘n roll ‘80s soundtrack produced by Harvey Mason, Jr., and dance numbers choreographed by “La La Land’s” Mandy Moore. In an era where girls used words like “tripendicular” and wore teal eyeliner, life, as the film emphasizes, felt like a pop song. The atmosphere Goldenberg and Talkington create captures the image those who didn’t live through the ‘80s have in their minds, a time when people were free to randomly burst into song.

The film is framed as a flashback where a mother, Julie (Alicia Silverstone), recounts a story from her youth to her daughter (Camila Morrone). A story of love, heartbreak, and far more than crazy hair. We are introduced to a young Julie (Jessica Rothe) and her friends Stacey (Jessie Ennis), Karen (Chloe Bennet), and Loryn (Ashleigh Murray). They’re seniors in high school who live at the mall, wear cotton candy-colored outfits, and speak the way you know a valley girl does. They’re prepping for prom, thinking about who’s going to take them. And, of course, Julie gets asked by her boyfriend, Mickey (played by Logan Paul whose “suicide forest” controversy resulted in the film being shelved for two years). But everything changes when she meets a handsome punk outcast at the beach. Randy (Josh Whitehouse) is a musician who fronts a punk band, and he’s from a whole different world: Hollywood.

The attention to detail when it comes to the contrasting environments of Julie and Randy is seen most notably in the costume and production design. Randy’s world is raw-edged, full of dull tones, and his wardrobe has a grunge, rebellious look, while everything about Julie’s world is bright and playful in color. Unlike Randy and Julie in the original film, the remake emphasizes the identities of these two characters much more. They are given passions – Randy, music, and Julie, fashion design – and they also dream of much more than just love, especially Julie who, unlike her friends who just want to have fun, dreams of going off to college, having a career, and not defined simply by a marriage. Another noteworthy change is that in the original film, Randy’s best friend was Fred, but this time, it’s a tough, feisty, and hot lesbian named Jack (Mae Whitman). This new “Valley Girl” allows its characters to blaze their trail, but it sticks to the Romeo and Juliet narrative that the original film is loosely based on as Randy and Julie deal with the disapproval of friends and family and must defy expectations as they both try to fit into worlds that don’t want to accept them.

While we can all agree that the Romeo and Juliet narrative has been used to death, “Valley Girl” is only the third American musical to incorporate elements of Shakespeare’s play. However, while it’s certainly the light entertainment needed during these times, it could never fit in the same shoes as Leonard Bernstein and Stephen Sondheim’s “West Side Story,” which is regarded as a landmark of musical history. It’s difficult for a musical to achieve critical acclaim without any original song work, no matter how much you like The Go-Go’s, The Cars, or Depeche Mode. But it helps that the song choices in “Valley Girl” are incredibly fitting to each scene to emphasize context and the feelings of the characters, with a cast that sings quite well. We knew Jessica Rothe could do a good scream thanks to her turns in the comedy/horror franchise, “Happy Death Day,” but she also surprises as a singer and gets some great solo moments to showcase her talent. While most of the covers could be seen as mediocre, Mae Whitman’s rendition of “Boys Don’t Cry” is bound to give you goosebumps.

Is “Valley Girl” true to its tagline, “the awesomest love story ever told”? No. It’s predictable with a familiar narrative and familiar conflicts, but it’s feel-good and highlights not the stereotypes of the era, but its boisterous energy.