“UNDER THE STADIUM LIGHTS” 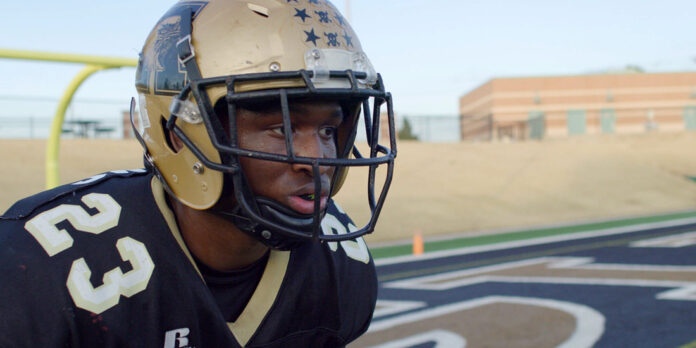 THE STORY – After a crushing defeat ended their prior season, everyone counted the Abilene Eagles out of title contention. Facing doubts and personal challenges both on and off the field, it takes the guidance of their team chaplain and a surrogate father figure for the players to realize what they can achieve when they stand united.

​​Right away, you learn what kind of movie you can expect with “Under the Stadium Lights” when you hear, “We here in Abilene believe in faith, family, and football — the Holy Trinity.” If these are the three things you came for, then this is the movie for you. But if you’re expecting a movie that goes beyond the surface level and gives you an empowering story, I’d recommend the countless other high school football tales out there.

“Under the Stadium Lights” is based on the true story of the 2009 Abilene High Eagles football season. The film picks up at the end of the previous season, which gave the team a tough loss, and the players are clearly heartbroken. The team’s chaplain Chad Mitchell (Milo Gibson), who is also a pastor and police officer, gets the team together and asks them all to open up to one another and talk about what may be bothering them that they don’t get to talk about at home. This lets us learn about a few key players on the team.

Ronnell Sims (Carter Redwood), the quarterback, has a father who is a drug addict and a mother who can’t take care of him. His cousin and running back Herschel Sims (Acoryé White) has a mother who is in and out of jail. Linebacker Augustine “Boo” Barrientes (Germain Arroyo) is facing pressure as his brother Zay (Nicholas Delgado) is selling drugs and part of a gang, and he wants Boo to join. Their home lives are tough, but they’ve found the family they need through football. Even Chad shares that he’s struggling at home — his wife and child want him to be more present despite his several community commitments. As the film goes on, we see how each of these pressures affects these young men as they ultimately try to earn a state championship.

This movie could have been inspiring, but there is so much lousy storytelling going on. The biggest cringe is the fact that every minority character we’re introduced to has a stereotypical broken home life. There’s drug addiction, parents who are not in their lives, and gang involvement. That’s not to say that young men and women don’t go through issues such as this in their private lives, but why do each of these players have to have this trauma? Why aren’t we introduced to a player of color that doesn’t come from a broken family? None of the white football players are introduced, which leads us to think they don’t have anything bad going on in their lives. White chaplain Chad’s biggest problem is that his family just wants him to spend more time with them, which clearly isn’t a problem at all.

To help these boys get through their tough times is Chad, which, maybe unintentionally from the writers, gives us our white savior. He’s there to provide encouraging words and a shoulder to almost everyone in town who is going through something. It’s great for these boys to have a role model in their lives, but we’ve seen this white savior trope time and time again. There are some moments where Harold Christian (Laurence Fishburne), the owner of a popular barbecue joint in town, encourages these boys. Still, his role is so small and basically reduced to laying in a hospital bed for a good majority of the film.

The movie also suffers from some awkward acting, directing, and editing choices. Redwood and White do a good job with their emotional performances, while Arroyo really overdoes the drama whenever he’s given a moment to speak. Gibson gives quite a lackluster performance, making even his preachy monologues boring to listen to. This film made an excellent choice to incorporate real footage from the team’s football games to better demonstrate how much of a powerhouse they were, but once those reels run out, we’re given an amateurishly directed film that doesn’t move the story forward in any way, and the editing often does not make sense. It’s actually quite challenging to follow the timeline within the movie’s first few minutes, given all the flashbacks, cuts, and whatever else is happening. This movie does definitely drive the “brother’s keeper” message. But that also gets quite old, to the point that it’s pretty nauseating toward the end.

“Under the Stadium Lights” falls short of really illuminating how great of a run the Abilene High Eagles had during their memorable 2009 football season. The movie is filled with bad storytelling, acting, and visuals, which in the end, would make it the perfect Hallmark or Lifetime movie. If you’re looking for a stronger football tale, “Friday Night Lights” might be a better option.