Two Weeks Out: The Hardest Oscar Categories To Predict 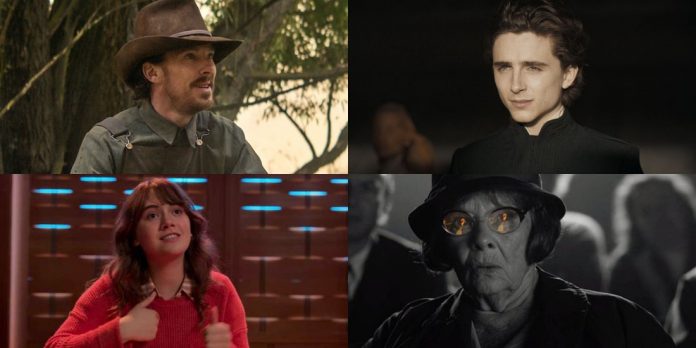 With less than two weeks until the 94th Academy Awards, many races feel pretty easy to predict in the wake of the DGA, Critics Choice, and BAFTA award winners. As more and more of the precursors wrap up and just a handful more to go, only a few select categories pose a significant challenge for awards predictors. This weekend gave us a very clear picture of the direction many races are headed. Critics’ Choice lined up with SAG in all four acting categories, and BAFTA lined up with three of those four. Upsets seem quite unlikely in acting, but other categories became much murkier over the weekend. Let’s break down the five most challenging categories left to predict: Best Film Editing, Best Cinematography, Best Adapted Screenplay, Best Original Screenplay, and Best Picture.

BEST FILM EDITING
When was the last time Best Film Editing gave us such a headache? For much of the season, “Dune” was assumed to be the easy winner in this category. Most view Denis Villeneuve’s sci-fi epic to be a sweeper in the craft categories, much in the same way “Mad Max: Fury Road” or “Gravity” was, but Best Film Editing hasn’t proved to be so simple for the ten-time Oscar-nominee. In a strange turn of events, both BAFTA and Critics’ Choice awarded films that aren’t even Oscar-nominated for Best Film Editing. “No Time To Die” won Best Editing at BAFTA, while “West Side Story” took the win at the Critics’ Choice. This has never happened since Critics’ Choice started handing out awards for the category in 2009.

However, there are a pair of Oscar nominees who did take home the top two categories at the ACE Eddie Awards. “King Richard” won the Eddie Award for Best Edited Feature Film (Dramatic), and “Tick, Tick… BOOM!” won the Comedy category. BAFTA and Critics’ Choice didn’t give us any clarity on a frontrunner, but it’s telling that “Dune” lost both alongside ACE.

It’s not crazy to think that “Dune” could lose Best Film Editing, but, strangely, there’s no clear frontrunner to challenge it. “King Richard” is in good shape with that ACE win, but it wasn’t even nominated at BAFTA or Critics’ Choice. “The Power Of The Dog” could also be a formidable contender to win Best Editing if it indeed is winning Best Picture (it too, like “Dune,” has a Best Sound nomination), but why hasn’t it picked up any wins for Best Film Editing yet? Surprisingly, this is the most challenging call of the season. I’m tentatively leaning toward “Dune” still, if only because I don’t see a consensus challenger, but this could sincerely go in any direction.

BEST CINEMATOGRAPHY
Continuing the theme of potential weaknesses for “Dune,” we come to Best Cinematography. As with many craft categories, “Dune” appeared to be the likely winner here for most of the season and still could take home gold. Greig Fraser has garnered so much goodwill for his stunning work on “Dune,” along with his work on the recently released box-office smash hit film, “The Batman.” Still, there’s a compelling narrative that could propel “The Power Of The Dog” to a historic victory. The second woman to receive a nomination for Best Cinematography, Ari Wegner delivered incredible work on Jane Campion’s film, which was recognized by the British Society Of Cinematographers and the Critics’ Choice Awards. If “The Power Of The Dog” is winning Best Picture, which we’ll break down soon, it’s easy to imagine Wegner making history as the first woman ever to win this category.

ASC doesn’t always align with Oscar, however. Six of the last ten winners at ASC went on to win the Academy Award, which isn’t the most consistent record. At both BAFTA and Critics’ Choice, eight of the last ten winners went on to win the Oscar. Because I’m still confident that “The Power Of The Dog” will win Best Picture, I think Wegner’s narrative will propel her to a win, defeating “Dune” (plus, Fraser will most likely be in the hunt again soon for “Dune: Part Two.” ASC could sway me one way or the other, though. If that award goes to any other film than those two, it will be a coin toss heading into the ceremony on March 27th.

BEST ORIGINAL SCREENPLAY
It’s a battle royale between two legends vying for their first Oscar win. Kenneth Branagh’s “Belfast” was once a more legitimate threat to win Best Picture. At that point, Original Screenplay seemed to be a secure win for the eight-time Academy Award nominee (especially after he won the Golden Globe in their combined screenplay category). Paul Thomas Anderson’s “Licorice Pizza” has grown as a contender to defeat “Belfast” for Best Original Screenplay, though with eleven career nominations and not a single win. While WGA will announce their winners on March 20th, “Belfast” was not eligible for the prize, leaving “Licorice Pizza” as the presumed winner there. Most had predicted that Critics’ Choice would give Best Original Screenplay to “Licorice Pizza,” and BAFTA would award “Belfast,” yet they did the opposite.

It speaks volumes that BAFTA snubbed “Belfast” in favor of “Licorice Pizza.” If any organization would award “Belfast,” it would’ve been the Brits. There’s no overlap between the Critics’ Choice, Golden Globes, and the Academy, while there is overlap between BAFTA and the Academy. Unless “Belfast” somehow rallies to win Best Picture, which isn’t impossible, “Licorice Pizza” has a great deal of momentum on its side. Furthermore, Paul Thomas Anderson’s screenplay has always felt much more in line with recent Best Original Screenplay winners than “Belfast.” In recent years, the Academy has trended toward the “cooler” picks like “Parasite,” “Get Out,” “Promising Young Woman,” and “Her.” “Licorice Pizza” fits right in alongside these picks. Of course, that’s a subjective definition, but “Belfast” seems to be running out of steam, leaving room for “Licorice Pizza” to win Anderson his first Oscar over Branagh. Still, “Belfast” scored more across the board nominations than “Licorice Pizza,” suggesting it might have more love within the Academy, thus making this a tight one to call.

BEST PICTURE & ADAPTED SCREENPLAY
It’s important to talk about Best Adapted Screenplay and Best Picture together because the current buzz makes it appear that both categories are a battle between “The Power Of The Dog” and “CODA.”

“The Power Of The Dog” has been out in front for Best Adapted Screenplay all year long, and yet in recent weeks, the ground has become shakier. Like “Belfast,” “The Power Of The Dog” was not eligible for WGA, and it managed to lose in a few key places where it should’ve won. At USC Scripter, Campion lost to Maggie Gyllenhaal for “The Lost Daughter.” The Oscar nomination leader also lost at BAFTA to “CODA” in a surprising turn of events. After “CODA” won SAG Ensemble, combined with the BAFTA win, many have rushed to declare that “CODA” will win both Adapted Screenplay and Best Picture, along with presumed Best Supporting acting winner, Troy Kotsur. It’s almost guaranteed that “CODA” will win WGA without “The Power Of The Dog” or “The Lost Daughter” in competition. With WGA and BAFTA wins on its side, that puts “The Power Of The Dog” in a very vulnerable position.

Could “CODA” defeat “The Power Of The Dog” in Best Adapted Screenplay? BAFTA does line up with the Academy in this category quite often. No one in their right mind doubts that Campion will win Best Director, so will the Academy prefer to spread the wealth? Interestingly, that’s precisely what happened last year when “The Father” took home Best Adapted Screenplay, while “Nomadland” continued to win Best Director for Chloe Zhao and Best Picture. The buzz for “CODA” is impossible to ignore at the moment, despite naysayers online saying otherwise. It’s the film benefiting the most from an elongated awards season, peaking at precisely the right moment as more voters catch up with it and wipe the tears from their faces by the time the heartwarming story wraps up.

Winning SAG Ensemble and the BAFTA for Adapted Screenplay, along with Troy Kotsur sweeping through Best Supporting Actor, has convinced many people that “CODA” can win Best Picture. Again, there’s no denying the strong and surprising awards run the film has had, but I still can’t see this happening. Yes, stats fall every year, but why would “CODA” have broad enough support to win Best Picture yet only score three nominations, none of which are below the line? You would have to go all the way back to “Grand Hotel” winning Best Picture 90 years ago (its only nomination) to find the last time this happened.

The last, and certainly not the least, remaining precursor for Best Picture is PGA, which will happen on March 19th. The only way I will predict “CODA” to win Best Picture is if it wins PGA. “The Power Of The Dog” hasn’t shown very many signs of weakness, so the reasons to doubt it are few. We went through this just last year: one film has been the frontrunner for much of the season, and now that we’re close to the end, people want to question it in an effort to inject some excitement into the race.

As of right now, I’m predicting “The Power Of The Dog” to win Best Picture, Best Director, Best Adapted Screenplay, and Best Cinematography (the same wins as the Critics’ Choice Awards). That is a perfectly reasonable haul for a Best Picture winner, and I haven’t heard a compelling enough reason to doubt logic on this one. Predicting “CODA” to win Best Picture if it does win PGA certainly isn’t ridiculous, but it’s still a stretch. For that reason alone, I’m sticking with “The Power Of The Dog” until further notice.

How did DGA, BAFTA, and Critics’ Choice affect your Oscar predictions? Are you predicting something different for any of these categories? Do you think “CODA” can defeat “The Power Of The Dog” for Best Picture? Let us know in the comments section below or over on our Twitter account.