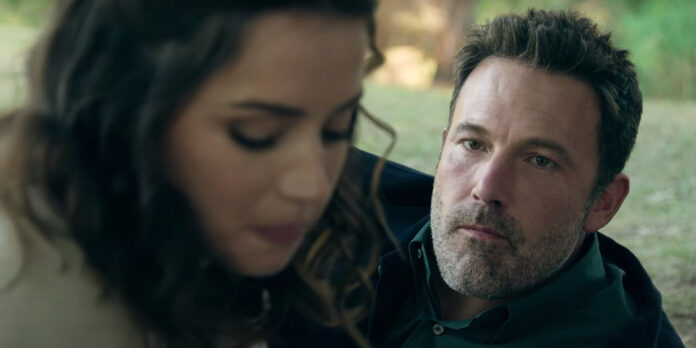 THE STORY – A well-to-do husband who allows his wife to have affairs in order to avoid a divorce becomes a prime suspect in the disappearance of her lovers.
​
THE CAST – Ben Affleck, Ana de Armas, Tracy Letts, Lil Rel Howery, Dash Mihok, Finn Wittrock, Kristen Connolly, Jacob Elordi & Rachel Blanchard​

Vic Van Allen (Ben Affleck) is a loving father and husband. Independently wealthy due to his creation of a computer chip which, as his wife Melinda (Ana de Armas) is fond of reminding him, is used in military drones, Vic has the time and space to be a very attentive father and husband. He also loves his wife a great deal, so much so that he looks the other way when she cavorts around town with other, younger men. But one night, something pushes him to tell a threatening lie to Melinda’s latest boy toy: Vic tells him that Martin McRae, a local man who has gone missing, was another “friend” of his wife’s and that he’s not missing, but dead by Vic’s hand. This kicks off a chain of events that threatens to unravel both Vic and Melinda’s lives.

While billed as an erotic thriller and displaying many of the familiar tropes of one, “Deep Water” flies in the face of much of what we expect from the genre, most notably in that it is for much of its runtime neither particularly erotic nor particularly thrilling. In the sex scenes, Lyne keeps things relatively even-keeled, retaining the background music to a minimum and keeping the camerawork mostly sedate. When the film finally gains momentum in the last act, we get two well-done chase scenes, but before that, the film unfolds at the more languid pace of a marital drama. Affleck and de Armas have white-hot, real-feeling chemistry, and they both dig deep under the skin of their characters. Unfortunately, the film’s screenplay (by Zach Helm and Steven Levinson, adapted from Patricia Highsmith’s novel) keeps the characters’ backstories a mystery, leaving the audience to piece together the Van Allens’ situation for themselves. This makes the film’s first half a bit difficult to decipher as we get introduced to Melinda, Vic, and the community in which they live. But while plot and character motivations may be murky, Lyne is far more concerned with putting the present-day bourgeois lifestyle under a heat lamp and watching it squirm.

Melinda and Vic’s lifestyle flies in the face of modern social mores at every turn. While at a party early in the film, the two talk about how they let their daughter (the adorable Grace Jenkins) choose if she wanted to go to public or private school. Their friends are politely horrified by the idea, asking how they could let a child decide such a thing and why they aren’t more concerned about her future prospects. But the Van Allens brush off these concerns. Whenever friends warn Vic that Melinda may be sleeping with other people and suggest that he should do something about it, he jokes about it and brushes them off even though her flirting couldn’t be any more obvious. Melinda is never ashamed of her polyamorous lifestyle, pleasantly introducing a new piano-playing paramour (Jacob Elordi) to everyone at yet another neighborhood party and parading around town with another (Finn Wittrock) not long after. Melinda and Vic certainly have marital problems, but the film posits that their cause is not Melinda’s affairs but their inability to reconcile what society expects of them with what works for them as a couple.

The problem is that this social commentary is being squeezed into the form of an erotic thriller when it doesn’t really fit. Lyne still gleefully hits all the marks expected of the genre – there are plenty of moments that lean into the softcore pulp that is the genre’s bedrock, and the projections used whenever anyone is in a car are laughably bad in a way that can only be an homage to the low-budget dregs of the genre (and if you doubt Lyne’s self-awareness, stay for the end credits, which both start and end in the most unhinged way) – but these things seem secondary to what he actually wants to do. To keep the focus on the themes, he gives the film a slow-burn quality that keys into the actors’ relationships with each other. Cinematographer Eigil Bryld’s constantly roving camera catches every stolen glance and pointed stare, every clasped hand and arched back. There’s a feeling of intimacy more than eroticism, and that draws you ever deeper into the film’s world. The film accumulates intrigue as it goes, both in terms of plot (when will this all unravel?) and in terms of character (what do these two really want from each other?), culminating in a deliriously entertaining last act that nonetheless feels a bit truncated, mainly because the ending feels a bit unresolved.

The film is also cast perfectly. Affleck and de Armas (whose real-life relationship makes this film an object of even further fascination) are practically made for erotic thrillers: His relaxed stolidity makes him the perfect patsy for her frisky earthiness, until his aggression and her vulnerability rise to the surface in key moments. Tracy Letts is a hoot as a writer who becomes suspicious of Vic’s story of killing Martin McRae, leaning into the script’s campier elements. Brendan C. Miller, Elordi, and Wittrock are each compelling in different ways as Melinda’s three lovers, making the most of their limited screentime.