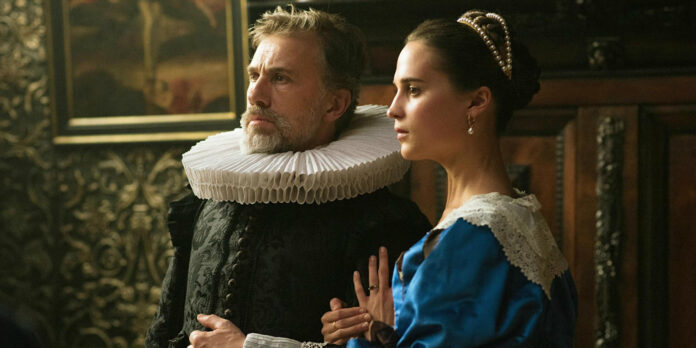 THE STORYSet against the backdrop of the 17th-century Tulip Wars, a married noblewoman (Alicia Vikander) has an affair with an artist (Dane DeHaan) and switches identities with her maid to escape the wealthy merchant she married. She and her lover try to raise money together by investing what little they have in the high-stakes tulip market.

​Shot in 2014 and only seeing the light of day as of now, there was very little doubt in my mind that “Tulip Fever” would be as awful as it is. Is it the worst film I’ve seen this year? No. But it’s seriously close. With jarring pacing, baffling character decisions and an ending that nearly made me throw up in disgust, this film is unequivocally a mess. The actors do what they can but are constantly let down by the film’s plodding screenplay, unsteady direction, and lousy editing.

Taking place during the 17th century during the Tulip Wars, a beautiful orphan woman named Sophia (Alicia Vikander) is bought by a nobleman named Cornelis Sandvoort (Christoph Waltz). The two are married for the sole purpose that Cornelis has a son with his new bride. Caught in a passionless marriage, Sophia grows attracted to a poor artist named Jan Van Loos (Dane DeHaan) who is being commissioned by Cornelis to create a portrait of the married couple. Loos and Sophia begin an affair but the situation becomes complicated when Sophia fears that Cornelis will disown her if she cannot have a child with him. She hatches a plan to pass off her maid’s unborn child as her own once the baby is born. She will fake her own death and raise whatever money she and her lover can in the high-stakes tulip market to run away and be free of Cornelis.

For a film that is all about the importance of tulips and their value during this time in history, outside of a bizarrely placed animated opening sequence, tulips are not mentioned for the first twenty minutes of the movie. Their impact on the film’s story is silly but not as silly as the characters and the selfish decisions which they make, all in the name of hollow love. I do not wish to spoil the twists and turns which the film takes in exploring the overly complex web of relationships between five of the film’s characters. Suffice to say, director Justin Chadwick does not give the characters their due in showcasing as to why they love each other outside of them all being good looking people. Christoph Waltz is the odd man out here by the film’s standards, however, his character actually gets to evolve as the film progresses into its ending. The main character in Sophia who we spend the majority of the runtime which turns out to be the one that is the most puzzling. Practically schizophrenic in her decision making and selfish in her desires, whatever goodwill she had, in the beginning, is long gone by the end.

What lessons are we to take away from “Tulip Fever?” That infatuation does not last? That you shouldn’t pray to god to let anyone die in childbirth? I can tell you what I was praying for though. I wanted God to provide me with a decent ending to this film and he could not even give me that. I left the theater not caring about the fabricated tacked on ending it provided for the characters. The material called for a darker ending that would at the very least jolt some excitement into the story. In the end, it becomes something predictable, dull and not worth re-visiting.

Performances are commendable but are all hurt by the film’s screenplay adapted by Tom Stoppard from the novel by Deborah Moggach. Academy Award winning actors such as Christoph Waltz are given ridiculous lines such as “I think my little soldier is ready tonight” and actors who have never been great such as Dane DeHaan say lines so on the nose like “God help me. I’m in love” in the worst way possible. Oddly handled montages, poorly placed comedy, needless voice over narration and an eight year time jump at the end are all contributing factors in making “Tulip Fever” such a frustrating experience. I guess that when you have a film that is clearly not working, you’ll do just about anything to mask its faults, even if it means creating new ones.