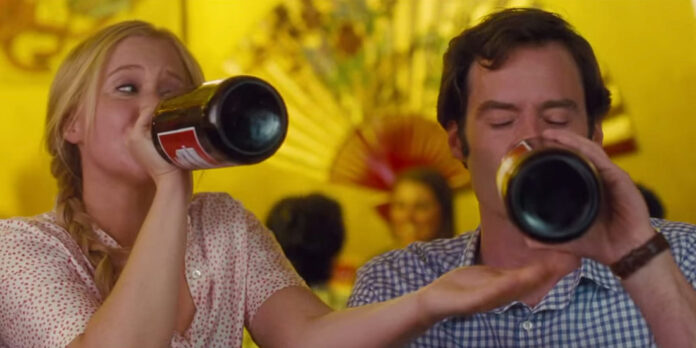 THE STORY – Ever since her father drilled into her head that monogamy isn’t realistic, magazine writer Amy (Amy Schumer) has made promiscuity her credo. As much as she enjoys an uninhibited life free of commitment, Amy is really in a rut. While writing a profile about charming and successful sports doctor Aaron Conners (Bill Hader), she finds herself actually falling in love for the first time — and what’s more, Aaron seems to like her too. Amy starts to wonder if it’s time to clean up her act.
​
THE CAST – Amy Schumer, Bill Hader, Brie Larson, Colin Quinn, John Cena, Vanessa Bayer, Tilda Swinton, Ezra Miller & LeBron James

“Trainwreck” has great moments for stand-up comedian, Amy Schumer, to stretch her crude hilarity and wrap it up into an interesting rom-com, with some deserved justice for Billy Joel’s ‘Uptown Girl.’ Schumer’s semi-autobiographical script introduces a character that isn’t so complex but is highly pained by how her father’s illness and affairs have shaped her demeanor as an adult in regards to love. With a sudden third act shift in aspiration, the film can still be found endearing and entertaining to many. Judd Apatow sits in the director’s chair while it’s Schumer who commands the screen here. While it offers us bouts of raunchy, honest humor, “Trainwreck” doesn’t come close to shining a light on Apatow’s previous offerings, “The 40-Year-Old Virgin” and “Knocked Up.”

Amy Schumer plays Amy, a career-focused, alcoholic, pot-smoking woman who finds her sexual muse in sleeping with many partners. Much of this established ideal comes from the opening flashback scene where we see her soon to be divorced father (Colin Quinn) tell her and her sister Kim that ‘Monogamy isn’t realistic.’ It plays an interesting role in the story and puts Amy’s character on the pedestal of a liberated workaholic. The relationship with her sister, Kim (An ever so engrossing Brie Larson), establishes these unwanted dreams in Amy’s reality, and furthermore turns her off from her own potential to be loved and settled.

Her job as a staff writer on a sensational men’s magazine assigns her to a sports-related piece, much to Amy’s upfront disapproval. She’s off to interview Aaron, the sports doctor, and surgeon, who soon becomes the nice guy she can’t get off her mind and has her rethinking what she would want out of a relationship. Bill Hader has a nice turn here as Aaron, giving him a sense of honesty and unconditional acceptance, although tarnished many times by the scope of Amy’s actions.

The film continues on with an unsurprisingly formulaic string of events. Girl meets boy and suddenly girl realizes she wants more from life, thanks to boy. It doesn’t feel like Amy needed an urgent change of pace, but the film coats the narrative with a humor that bites back at her norms and hides the mechanics of that dilemma. As the audience, maybe we can feel comfort in thinking that these two won’t actually last long and that perhaps Apatow’s mindset was creatively stuck. Some of the jokes fall flat and awkward while other scenes, captured sometimes by people who aren’t Schumer, land exceptionally and prove to justify the film’s box office success. It’s not a mediocre comedy. It’s quite entertaining even if there’s at least just one moment that makes you cry (I’m looking at you, John Cena).

In a strange way, the supporting choices of LeBron James and John Cena have arguably been worked into the more comedic parts of the film. Looking back, Cena has a growing knack for comedy (Which has come to fruition with “Blockers”), and his dedication to his work is seen here. Apatow brings the best out of them. What he doesn’t do is cut his films shorter. Apatow’s films seem to be teetering on overstaying their screen times. “Trainwreck” would have easily benefited from a 20-minute cut, like the poorly executed cameos from the smaller roles. After a while, it begins to feel like melodrama disguised in sketches from Schumer’s Comedy Central show, “Inside Amy Schumer.” The film could have hit the high road and went full on knee-slapping parody, but instead tries to unravel too much dysfunctional sentimentality into the twist.

The gender-swapping titular role of “Trainwreck” proves a high for new age comedy. It prances around familiar, overused rom-com dissections, but brings it home enough for your obnoxious enjoyment. Apatow and Schumer bounce off the same energy and present a daring, often funny comedy.