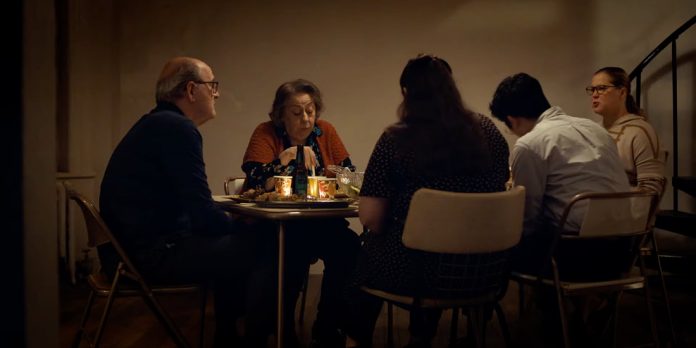 ​By Matt Neglia
​
A24 and Showtime has released the trailer for Stephen Karam’s adaptation of his Tony Award-winning play “The Humans” starring Beanie Feldstein, Jayne Houdyshell, Richard Jenkins, Amy Schumer, June Squibb & Steven Yeun. The film had its world premiere recently at the Toronto international Film Festival and will be released in theaters and on Showtime this November.
​
​Click below to see the trailer.

Plot Synopsis: Set inside a pre-war duplex in downtown Manhattan, The Humans follows the course of an evening in which the Blake family gathers to celebrate Thanksgiving. As darkness falls outside the crumbling building, mysterious things start to go bump in the night and family tensions reach a boiling point.​

What do you all think of the trailer? I had the chance to see this for TIFF, and I was surprised to learn that it’s almost a horror film at times in the way Karam presents not only the relatable anxieties of the characters but also in how the rundown New York apartment acts as a character to bring out those fears in the characters. The entire ensemble’s performances are terrific across the board, with Richard Jenkins and Tony-winner Jayne Houyshell as the standouts. Inevitable comparisons will be brought up with “The Father,” in how Stephen Karam shoots his own adaptation, but I still found it to be a compelling piece of work. The Showtime+A24 development is new to me, which now calls into question the film’s eligibility for Oscars vs. Emmys, but we’ll seek confirmation on that before we jump to any conclusions. What do you think, though? Let us know your thoughts though in the comments below or on our Twitter account.