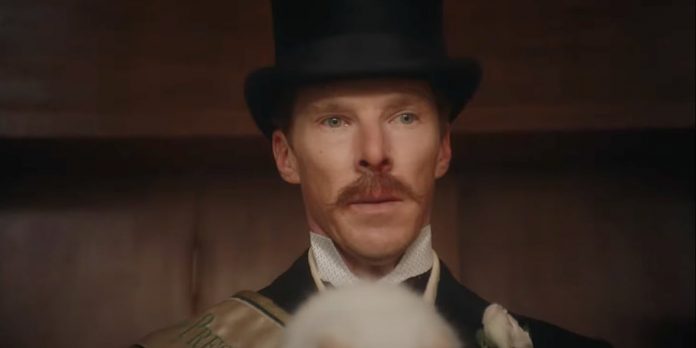 By Matt Neglia
​
Amazon Studios has released the trailer for Will Sharpe’s “The Electrical Life Of Louis Wain” starring Benedict Cumberbatch, Claire Foy, Andrea Riseborough & Toby Jones. The film had its world premiere at the Telluride Film Festival and then played at the Toronto International Film Festival. It will be released in theaters on October 22nd and then will stream on Prime Video on November 5th.

​Plot Synopsis: The extraordinary true story of eccentric British artist Louis Wain (Benedict Cumberbatch), whose playful, sometimes even psychedelic pictures helped to transform the public’s perception of cats forever. Moving from the late 1800s through to the 1930s, we follow the incredible adventures of this inspiring, unsung hero, as he seeks to unlock the “electrical” mysteries of the world and, in so doing, to better understand his own life and the profound love he shared with his wife Emily Richardson (Claire Foy).

What do you all think of the trailer? I was lucky enough to see this at the world premiere at Telluride. Although it’s getting less attention than the other Benedict Cumberbatch festival film (“The Power Of The Dog“), Will Sharpe’s highly creative and delightful biopic should not be dismissed. As you can tell from the trailer, it has a distinct visual look that highlights its subject’s mad brilliance and erratic behavior. Claire Foy and Benedict Cumberbatch have terrific chemistry with one another, and I think audiences will be swept up in their quirky romance. Overall, as far as Oscars go, if this catches on, watch out for it in Costumes and Makeup & Hairstyling (the work on Cumberbatch in latter stages of the film is seamless) and for it to help bolster Cumberbatch’s shot at a nomination for “The Power Of The Dog.” However, I would argue he’s equally as good in this, but that’s a conversation for another time. What do you think, though? Let us know your thoughts in the comments section below or on our Twitter account.