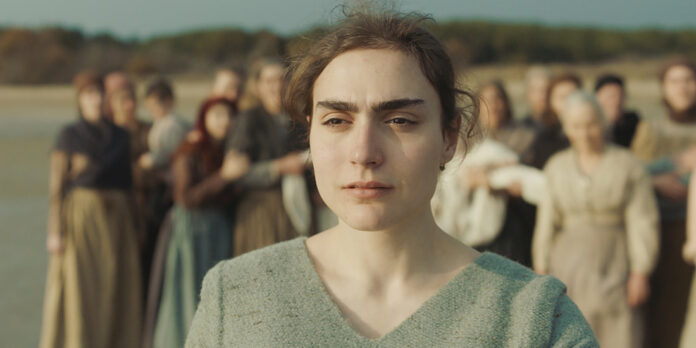 THE STORY – Agata (Celeste Cescutti) was sleeping when her daughter was taken from her and buried in a nearby wood. The priest informs her that stillborn children cannot be named and thus remain unbaptized and destined to wander in limbo. But fellow villagers talk of a distant church where such innocents are resurrected long enough to take a single breath — long enough to be recognized by God and granted entry into heaven. So Agata exhumes her daughter, leaves her husband and her remote island home, and journeys to the wintry north, alone and without guidance… until she meets Lynx (Ondina Quadri), a feral thief with pale, hard eyes, knowledge of Agata’s destination, and a scavenger’s intuition. Together, Agata and Lynx contend with kidnappers, bandits, and forbidding superstitions en route to a destination that may or may not exist.

​​​Agata (Celeste Cescutti), a young woman living in turn-of-the-century rural Italy, has just suffered the tragedy of giving birth to a stillborn daughter. Beyond this unspeakable hardship, Agata is at odds with her Catholic faith, which dictates that unbaptized souls, even those of infants, cannot be given a name and linger in the darkness of Limbo for eternity. Through the grapevine, Agata learns of a mysterious sanctuary in the unfamiliar North that can return an infant’s soul to its body long enough to be baptized and given a passage to Heaven. Motivated by a mother’s unconditional love, she becomes determined to take on this venture at any cost. Carrying the small body in a crate on her back, we watch as a woman broken by a cruel twist of fate bears this burden on her mind and in her heart.

The film opens with Agata standing on a beach surrounded by a group of other women from the village. Echoing the Virgin Mary in a pale blue dress and shrouded in a white veil, the women touch her gently, stroking her belly and guiding her to enter the water and the new stage of motherhood. There is a sense of ritual, a spiritual set of rules determined to guide one’s womanhood down a specified path. After her daughter’s death, these women do not return with comfort or condolences but instead, are nowhere to be found. Along with Agata, the audience is angry, but this anger is futile, for no single person is to blame for this misfortune. The town’s priest buries the baby as Agata sleeps from exhaustion, denying her the chance of coming to terms with her grief. Her body will soon forget, and she hopes her heart will forget, too.


Director Laura Smani’s debut feature portrays this emotionally devastating tale with control and grace, demonstrating natural expertise and an already signature gaze rare amongst new filmmakers. She manages to portray a world devoid of the rigid binary of good or evil instead of filling the story with multitudes. There is at once beauty and hardship, a feeling of floating on air and tumbling down to earth. Throughout her journey, Agata encounters various other characters with their murky motivations, some of generosity, some of greed, and often somewhere in between. Among them is Lynx (Ondina Quadri), a mysterious, opportunistic young man whose intentions shift and sway with every footstep. Introduced as an impish trickster, at first, he’s a cause of mayhem but eventually becomes a source of guidance and comfort. Together, Agata and Lynx pass through the region like minuscule figures in the background of a nineteenth-century landscape. Scattered among moments of urgency, onto which the audience can easily grab, are moments of stillness and contemplation, allowing for room to breathe. As if an Arthurian quest for truth and glory, Agata and Lynx use skills of the mind and the heart to navigate this series of obstacles as their relationship grows stronger along the way. We feel as if we have been given the privilege to join this pair on their journey, but also a sense of obligation and desire to take on the part of Agata’s burden, to hold her hand and share her grief.

As the film’s heart and soul, Cescutti’s striking features transport us to another era, conveying the greatest emotion with a slight glance. At once possessing sturdiness and vulnerability, she is like a saint on her way to greatness. Her classic beauty calls to mind Bouguereau’s grieving Madonna in “Pietà,” or Rossetti’s hypnotic “Proserpine.” Though taking place in Italy around the year 1900, one could easily imagine the traversed land as biblical Galilee, where Agata’s story may have found its way into the New Testament. The subject matter brings to mind other mythologies, such as that of Demeter and Persephone, in which the grieving goddess of the harvest stopped at nothing to retrieve her daughter from the Underworld. (Ovid himself may have conjured up this story among his many allegorical fables.) Together, the pair appears as a reincarnation of Virgil and Dante, treading carefully throughout this uncharted land in search of the unknown. Strewn with chilling moments of magical realism, “Small Body” effortlessly displays a fully developed world with enriched characters, binding a story of infinity within a ninety-minute timeframe.