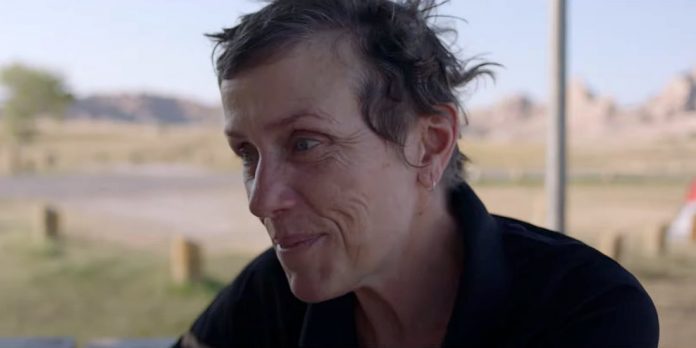 By Matt Neglia
​
Searchlight Pictures has released the trailer for “Nomadland” starring two-time Academy Award winner Frances McDormand​. It will be released on February 19th 2021.
​
​Click below to see the trailer.

​
​Plot Synopsis: Following the economic collapse of a company town in rural Nevada, Fern (Frances McDormand) packs her van and sets off on the road exploring a life outside of conventional society as a modern-day nomad. The third feature film from director Chloé Zhao, NOMADLAND features real nomads Linda May, Swankie and Bob Wells as Fern’s mentors and comrades in her exploration through the vast landscape of the American West.

What do you all think of the trailer? Winner of the Venice Film Festival’s Golden Lion and the Toronto International Film Festival’s People’s Choice Awards, “Nomadland” haas already established itself as one of the major Oscar players this year. What Chloe Zhao has created with this film is something extraordinarily beautiful and revealing about a sub-culture many of us don’t know much about. McDormand delivers one of her most restrained and humanistic performances and the cinematography is jaw-droopingly gorgeous, reminding us of the work of Terrence Malick. It goes without saying but if you haven’t already seen “Nomadland,” we highly recommend you do so as soon as you can! You can also check out our recent podcast review here. Let us know your thoughts in the comments below or on our Twitter account.