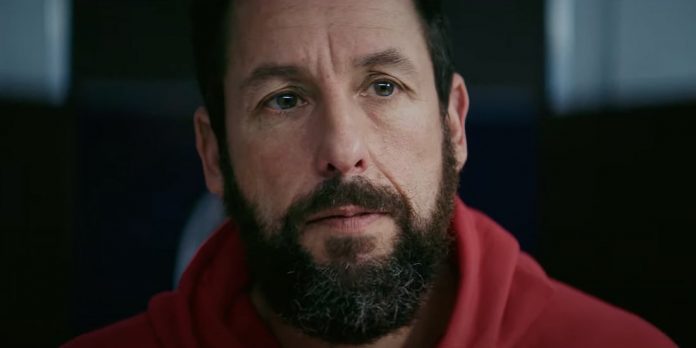 Plot Synopsis: Stanley Sugerman’s (Adam Sandler) love for basketball is unparalleled, but the travel weary Philadelphia 76ers scout who has higher ambitions of being a coach remains stuck on the road looking for the next unknown talent. His search around the world leads him to Spain, when he discovers Bo Cruz (NBA player Juancho Hernangómez), an incredible streetball player with a troubled past. Stanley and Bo connect on and off the court, with their passion for the game and as loving family men who want to prove they can win, in basketball and in life. With the support of Stanley’s wife, Teresa (Queen Latifah), can the underdogs come out on top? HUSTLE, an inspirational drama, co-stars Ben Foster, Kenny Smith, Anthony Edwards, and Tobias Harris, is directed by Jeremiah Zagar and is produced by Sandler, Allen Covert, Joe Roth, Jeffrey Kirschenbaum, Zack Roth, LeBron James and Maverick Carter.

What do you all think of the trailer? After the critical reception for “Uncut Gems,” which saw Adam Sandler receive the best reviews of his career, I can’t be the only one happy to see him making a Netflix film that doesn’t rely on his childish goofball antics to tell a story. In fact, “Hustle” looks like yet another dramatic performance from the Sandman, which could rank as one of his best. I’m sure it will follow a lot of sports cliches we typically see in these types of movies, but I’m mostly looking forward to more dramatic work from Sandler. Funnily enough, the premise of this movie could almost function as a “what if” sequel to the Sadie Brothers’ film if Howard Ratner had survived and received another shot at life (given that character’s love for basketball). Director Jeremiah Zagar already proved to me he was a talent to eat after his undersign independent film “We The Animals,” so I have confidence this will be, at the very least, a compelling watch. What do you think, though? Let us know your thoughts in the comments section below or on our Twitter account.
​
You can follow Matt and hear more of his thoughts on the Oscars and Film on Twitter at @NextBestPicture