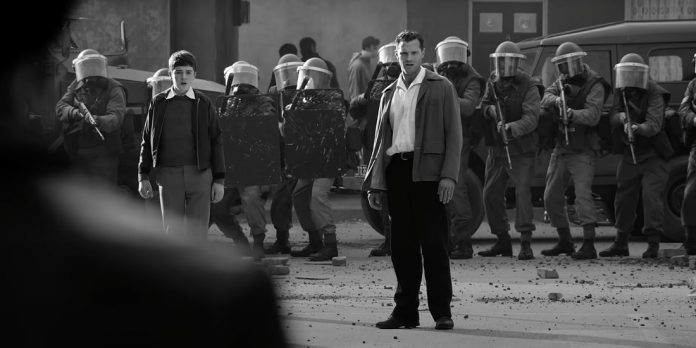 By Matt Neglia
​
Focus Features has released the trailer for “Belfast” starring Caitriona Balfe, Judi Dench, Jamie Dornan, Ciaran Hinds & Jude Hill. The film had its world premiere yesterday at the Telluride Film Festival, will play next at the Toronto International Film Festival and then be released in theaters on November 12th.

​​Plot Synopsis: A semi-autobiographical film which chronicles the life of a working class family and their young son’s childhood during the tumult of the late 1960s in the Northern Ireland capital.

What do you all think of the trailer? As of this writing, I have not yet seen the film, but I can already tell from the reactions and early reviews that this is one of Kenneth Branagh’s best. After dabbling in big-budget studio films these last few years, he’s given us a more personal story directly from his childhood, told with warmth, reverence, and respect. The cast looks fantastic all around, but I’m most curious about Judi Dench and newcomer Jude Hill. I’m sure there will be many comparisons to “Roma” with this film, but at 97 minutes and looking a bit more accessible than Alfonso Cuaron’s Oscar-winning film, it will be interesting to see how far this goes in the Oscar race. What do you think, though? Let us know your thoughts though in the comments below or on our Twitter account.