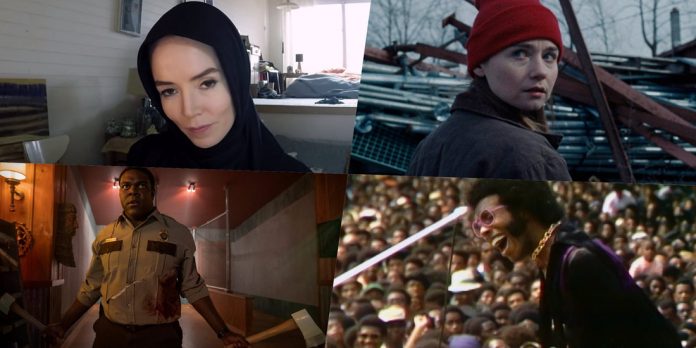 Although theaters are still struggling to recover from the ongoing coronavirus pandemic, that hasn’t stopped several high-profile releases from premiering this summer, from sequels in fan-favorite franchises (“F9,” and “Black Widow“) to heralded horror hits (“A Quiet Place Part II,” and “The Conjuring: The Devil Made Me Do It“) to fun family fare (“Cruella” and “Jungle Cruise“) and everything in between. However, with so much attention on “the return of big-budget blockbusters,” several smaller indies seem to have fallen through the cracks, unable to match the overwhelming attention these larger-scale titles generate. As the summer movie season comes to a close and we head into a bit of a “waiting period” before the next wave of franchise flicks arrive, there’s no better time to revisit the critically acclaimed releases that don’t have the advantage of the mighty marketing campaigns major studios can afford. Below, we’ve outlined ten films that fit that bill perfectly, representing an array of genres and shining a light on stories commonly swept aside.

Premiering at the Sundance Film Festival this past January, “Censor” received instant acclaim as an attention-grabbing, innovative addition to the horror genre. The feature follows Niamh Algar’s (“Wrath of Man” and “Calm with Horses“) Enid, a film censor who works diligently to protect average audiences from the gory decapitations and mutilations featured in the horror movies she’s assigned to edit. Her commitment to her craft is heightened by the hurt she still feels over being unable to save her sister years prior, who disappeared and was recently declared dead in absentia. However, when Enid is asked to review a film that resembles some of the traumatic memories from her childhood, she begins to revisit the pains of her past and sets off on a tragic search for the truth. The eerie thriller earned 89% on Rotten Tomatoes and a 67 on Metacritic.

After debuting at the Deauville American Film Festival in September 2020, Nicole Riegel’s “Holler” was finally released this June. Centering around a young woman named Ruth (a brilliant Jessica Barden) who joins a dangerous scrap metal crew in order to pay her way to college – before finding herself at a crossroads between a promising future miles away and the family she would be leaving behind – the drama earned effusive acclaim across the board, particularly for its poignant performances. Despite its familiar structure, the story separates itself from thematically similar titles with the specificity in which it treats its characters. Additionally, since Riegel was designated as one of Variety’s “ten directors to watch” in 2020, it’s best to get acquainted with her art before she truly breaks big in a few years. “Holler” received a 91% on Rotten Tomatoes and a 76 on Metacritic.

Alexandre Aja certainly isn’t a new name in the horror/thriller space – having directed several of genre fans’ modern faves, such as “The Hills Have Eyes,” “Piranha,” and “Crawl” – but Netflix’s “Oxygen” became one of his most acclaimed yet, concerning a young woman (Mélanie Laurent) who wakes up in a cryogenic chamber with no memory of how she got there and must find a way out before running out of air. With only 90 minutes to live, the 100-minute film practically unfolds in real-time, ramping up the intensity with twists and turns nearly every other minute. The intimate adventure is anchored by Laurent’s absorbing lead performance, who essentially carries the entire endeavor on her back. As a result of this riveting filmmaking, “Oxygen” was awarded 88% on Rotten Tomatoes and a 67 on Metacritic.

Actress Natalie Morales announced herself as a director on the rise in a significant way this year, first with the screen life dramedy “Language Lessons” – which played at both the Berlin International Film Festival and South by Southwest – and then with Hulu’s coming-of-age comedy hit “Plan B.” The film follows straight-laced high school student Sunny (“The Big Sick’s” Kuhoo Verma) and her slacker best friend Lupe (Victoria Moroles) as the two have to adventure across America’s heartland in search of a Plan B pill after Sunny has a sexual encounter that goes sideways. While feeling similar to recent female-led coming-of-age flicks like “Booksmart” and “Unpregnant” (and representing yet another comedic interpretation of “Never Rarely Sometimes Always,” like the latter), it received raves for its fresh perspective on the genre – centering around two young women of color – and its sharp, snappy script, eventually earning a 96% on Rotten Tomatoes and a 74 on Metacritic.

The Martin Scorsese-produced “Port Authority” was finally released two years after its 2019 Cannes Film Festival debut this summer, sadly struggling to find the audience it deserved, especially given how rare it is to find a romance with a trans woman in the lead role. The film begins on Fionn Whitehead’s (“Dunkirk“) Paul, a 20-year-old Midwesterner who arrives in New York City and, after being ghosted by his sister, finds himself without shelter or a support system of any kind. Within time, he becomes entranced by the ethereal Wye (Leyna Bloom), a local dancer, and a relationship soon blossoms between the two, but when Paul finds out that Wye is trans, he’s forced to re-evaluate his entire identity. The film received some criticism for centering a trans story around a straight white man. However, reviews were still largely positive across the board, as evidenced by its 84% on Rotten Tomatoes and 61 on Metacritic.

Another long-delayed release, “Profile,” first premiered at the Berlin Film Festival in 2018, but American audiences couldn’t see the screen life crime thriller until May 2021. Thankfully, it was worth the wait. Much like the other screen life stories director Timur Bekmambetov’s has produced (“Unfriended” and “Searching“), “Profile” takes a simple concept – where an investigative journalist looks into ISIS’ methods of luring women into Syria by creating a fake Facebook profile and striking up a relationship with an ISIS recruiter – and infuses it with unbearable intensity thanks to a torrent of twists that make it almost impossible to catch your breath until the end credits commence. Critics had some qualms with how the premise stretches plausibility at times, but reception was just positive enough for the film to earn a 60% on Rotten Tomatoes and a 54 on Metacritic.

The first of three documentaries on this list, “The Sparks Brothers,” serves as an appetizer to Edgar Wright fans who have been awaiting his next feature following the 2017 smash hit “Baby Driver.” It may not be “Last Night in Soho,” but this riveting look into the lives of Ron and Russell Mael – members of the pop and rock duo Sparks – is stunning all the same. With a blend of black and white interviews, animation, concert footage, and peeks behind the scenes of Sparks’ creative process, “The Sparks Brothers” quickly becomes another one-of-a-kind concoction from Wright’s wonderfully creative mind. It just might even end up in the Best Documentary Feature race at the end of the year, if its 95% on Rotten Tomatoes and 80 on Metacritic are any indication.

​”Summer Of Soul (…Or, When The Revolution Could Not Be Televised)”

“Summer of Soul (…Or, When the Revolution Could Not Be Televised)” made quite a splash at this year’s Sundance Film Festival – receiving both the Grand Jury Prize and Audience Award for Documentaries – but it didn’t quite capture that same attention upon its debut on Hulu on July 2nd. Chalk it up to being overshadowed by the obscene competition in the film space over the Fourth of July weekend (“The Tomorrow War,” “The Boss Baby: Family Business,” “Fear Street Part One: 1994,” etc.). Still, there’s no better movie to end summer on than a documentary about the season itself, examining the 1969 Harlem Cultural Festival, which was held at Mount Morris Park, lasted for six weeks, and featured performers such as Stevie Wonder, Mahalia Jackson, Nina Simone, and so many more. The doc has been praised to high heaven for its invigorating interviews and fascinating live footage, and with a 99% on Rotten Tomatoes and a 96 on Metacritic, look for this one to end up in the Oscar race too.

In the 90s, Val Kilmer was known the world over as an absolute superstar, thanks to his iconic turns in blockbuster hits like “Top Gun” and “Batman Forever” and his contributions to genre classics like “Tombstone” and “Heat.” While he had several standout supporting roles in a number of 2000s titles as well (“Alexander,” “Kiss Kiss Bang Bang,” “Déjà Vu,” etc.), his career hit a bit of a lull in the 2010s, and, sadly, these struggles developed further when he was diagnosed with throat cancer in 2015. A24’s “Val” details his health battles in-depth, but the documentary is also so much more, capturing the full extent of his heartbreaking childhood and exemplary career, all accompanied by footage Kilmer himself has shot throughout his entire life and sensitively narrated by his son, Jack. With a 93% on Rotten Tomatoes and a 73 on Metacritic, this is another one of 2021’s critical darling documentaries.

Switching gears, “Werewolves Within” couldn’t be further from the somber and self-serious fare featured earlier on this list. An adaptation of the 2016 video game of the same name, the film follows forest ranger Finn Wheeler (Sam Richardson, of “Veep” and “Promising Young Woman“) as he must keep the peace in the small town of Beaverfield, where a proposed pipeline has created hostilities between residents. When a blizzard knocks out all power in the town, and the citizens are confined to an old lodge, their worst tendencies and prejudices begin to rear their ugly heads. This tension is further exacerbated by the maulings of a mysterious creature who starts tormenting the group. While that plot sounds petrifying, “Werewolves Within” certainly has a masterfully macabre sense of humor as well, and this satisfying synthesis of horror and comedy was complimented by critics, as it received a 86% on Rotten Tomatoes and a 66 on Metacritic.

What do you think of my list? What are some of your favorite films from 2021 so far? Let us know in the comments section below or on our Twitter account.