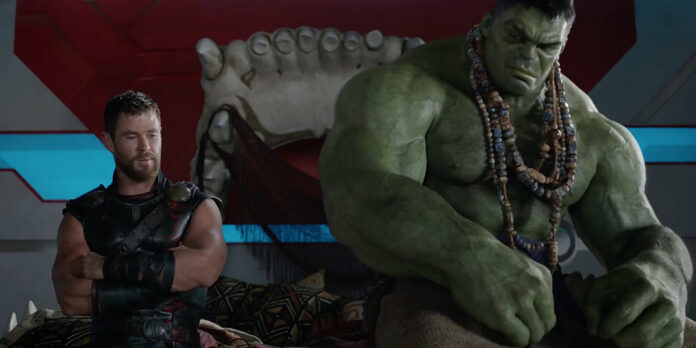 THE STORY – Imprisoned on the other side of the universe, the mighty Thor finds himself in a deadly gladiatorial contest that pits him against the Hulk, his former ally and fellow Avenger. Thor’s quest for survival leads him in a race against time to prevent the all-powerful Hela from destroying his home world and the Asgardian civilization.

Director Taika Waititi (“What We Do In The Shadows” & “Hunt For The Wilderpeople“) has finally cracked what made Thor so accessible in the Avengers films but was not quite working in the standalone films. “Thor: Ragnarok” is not an overly serious film and contains a tremendous amount of humor and playful fun, stemming from Thor’s own interactions with other members of the Avengers and characters specifically created for this film. When the film tries to get serious, with scenes involving his father Odin (A returning Anthony Hopkins) or his antagonistic relationship with the villain of the film, “Thor: Ragnarok” stumbles. However, the improvisational comedy, colorful re-tinkering of the world’s aesthetics and charm of the characters, ultimately makes “Thor: Ragnarok” the best standalone Thor film yet.

Two years after the events of “Avengers: Age Of Ultron,” the God of Lighting, Thor (Chris Hemsworth), finds himself captured by the fire demon Surtur (Clancy Brown), who reveals to Thor about the coming of Ragnarok – the destruction of Asgard. Thor escapes and comes to realize that a new threat is coming to Asgard, Odin’s first born child Hela (Cate Blanchett), who was once imprisoned. She has now been set free and plans to bend the other realms to her will. Thor sets off to stop her along with his brother Loki (Tom Hiddleston). After an unsuccessful encounter with his sister results in his capture by the Grandmaster (Jeff Goldblum) on the gladitorial-trash planet known as Sakaar, Thor comes across his old friend Bruce Banner (Mark Ruffalo) who has been the Hulk for two years and forms a new relationship with Valkyrie (Tessa Thompson). Together, they plan to travel back to Asgard and defeat the seemingly unstoppable Hela.

Chris Hemsworth has now played the God Of Thunder in five films now (Fully, not counting shorts or cameos) and his turn in “Ragnarok” is his best effort yet. Considered a tad bit clunky in the first few installments, Hemsworth has been finally able to lean more into the character’s more brutish, accessible and loveable charm this time around under the direction of Waititi. Nearly every character in “Ragnarok” is conveyed and performed perfectly under his direction. Newcomers Keith Urban as Hela’s executioner Skurge (Who is managing to land himself a role in nearly every big franchise these days), Jeff Goldblum (Giving the most Jeff Goldblum performance ever) and especially Tessa Thompson as the alcohol chugging badass female warrior Valkyrie who serves as more than just a love interest for Thor – she’s his equal through and through. Even Taika Waititi lends his comedic voice talents to the role of Korg, a gladiator rock monster whose every line managed to make the audience laugh hysterically. The returning Avengers such as Dr. Stephen Strange (Whose sequence with Thor, although shortlived, stands as probably my favorite sequence in the film), Bruce Banner/Hulk (Mark Ruffalo, who needs to appear in more of these) and even the uneasy ally Loki (Tom Hiddleston, still finding new depths to the character) are all fun and extraordinary for revealing aspects of Thor’s personality and making him a much more endearing character to us. My only complaint with the cast lies with Cate Blanchett who’s character Hela is unfairly given bland motivations and never fully clicks as a convincing villain due to Blanchett’s campy performance. Everyone else is pretty campy, however, the main antagonist should be striking fear into the hearts of the audience as much as the protagonists, which Blanchett never fully achieves in “Ragnarok.”

Some sequences don’t transition well (Editing wise) from one set-piece to another, it’s too long at two hours and ten minutes and the tone of the film can be a mess 15% of the time, but despite all of that, “Thor: Ragnarok” is a crazy amount of fun at the movies. There are times where the expression “dumb fun” can mean a good thing and with “Thor: Ragnarok,” it earns it. By making Thor more human in terms of vulnerability and overall sense of humor, Taika Waititi has found a way to give us a unique entry into the Marvel Cinematic Universe instead of “just another Thor film” (Which is how “Thor: The Dark World” came across as). Like the many explosions, fists to the face and bolts of lighting that the film contains, “Thor: Ragnarok” is a blast from start to finish.