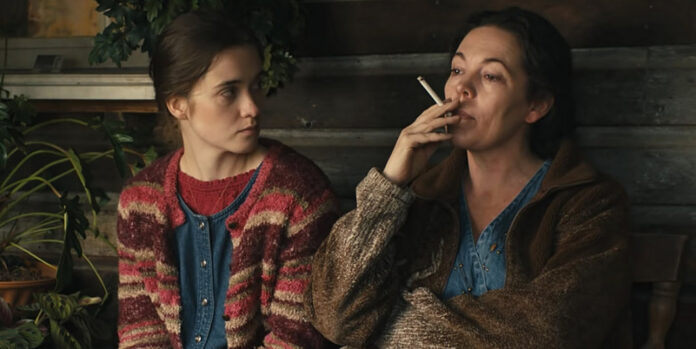 ​​“Them That Follow” is more of a fascinating glimpse into a culture that is very different from our own than a fully satisfying film experience. Still, it is an empathetic, atmospheric, well-acted and yes, suspenseful drama.

Mara Childs (Alice Englert) lives in the Appalachian mountains alongside her fundamentalist baptist preacher father (Walton Goggins). Of course, these aren’t your traditional Baptists. These are snake handlers, who believe that one of the most crucial aspects of faith is the act of handling venomous snakes. Within this universe, Mara must choose between adhering to her lifelong faith, or her attraction to her childhood friend Augie (Thomas Mann), whose own faith-based doubts threaten to rattle the foundations of her belief system.

When handling a culture that tends towards the sensational, like, say Baptist snake handlers, it could be easy to delve into exaggeration and mockery. Instead, writer/directors Britt Poulton and Dan Madison Savage opt for a slow burn examination of a dying culture, attempting to understand what precisely attracts the faithful in these communities to such an atypical practice, and how this adherence impacts their lives. More importantly, the film is an examination of deep family dynamics and gender politics that are more far-reaching than just to the sort of communities examined in the film. While this respectful and almost anthropological examination keeps the film from ever becoming campy, it also keeps the viewer at something of a distance. The tension inherent in constant deadly snakes on screen only really comes in to play in the third act.

In addition, while much of the cast is excellent, Thomas Mann feels badly miscast as an Appalachian hillbilly. But if he proves a show-stopping distraction, the rest of the cast compensates admirably. Walton Goggins and especially Olivia Colman deliver exceptional performances as devout believers who find themselves pushed to the brink, as the world closes in on their faith and values. Colman particularly shines, giving a 180 from her performance in “The Favourite,” painting a thoroughly grounded southern mother who is both parts menacing and caring. In addition, Lewis Pullman delivers in ways that Mann fails to, bringing us a deceptively charming romantic suitor. And of course, Alice Englert is a star in the making, entirely burying her native Australian accent, and accurately capturing all the horror of facing a crisis of faith and culture. Jim Gaffigan is here as a hillbilly too and it’s as distracting as you think it would be.

The direction is assured, as is the cinematography, which lingers on autumnal yellows and reds. The score is arguably the film’s strongest feature, lending a mournful tone to the proceedings. And the film artfully buries plot threads early on that will come into play by the conclusion. In the way that Hitchcock describes “let the audience know there is a bomb ticking under the table,” so do the filmmakers with ticking time bombs of plot points that we know, but the characters do not. And it lends some tension to the proceedings. But something about the journey is not taught enough. Rather, the film trudges along slowly. And as a result, something about “Them That Follow” feels slight by the time it reaches its conclusion. We have visited another world, and we have seen someone come of age, but it feels as though the film were reaching for something more, something bigger and never quite achieved it? It’s poetic in a sense how much the film parallels its characters in that regard. This is a film that is firing on all cylinders but firing so slightly as to never quite make the impact it should.