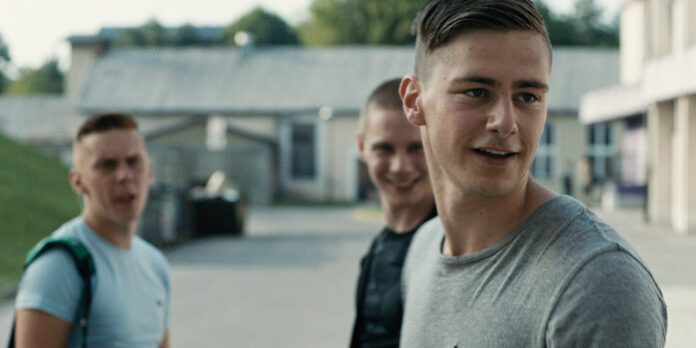 THE STORY – After being sent to a youth detention centre, 18-year-old Andrej has to fight for his place within the group of inmates while getting closer to Zeljko, their informal leader, and struggling to keep his repressed secret in the dark.
​
THE CAST – Matej Zemljic, Timon Sturbej & Gasper Markun

​The sad state of the world is that, while so many places have the luxury to tell a wide variety of stories, many other places are not so lucky. When it comes to films that take an interest in telling stories about the complicated lives within the queer community, there’s been great advancement in some parts of the world whereas others have been lacking. Little by little, more countries are pulling a light toward these stories, as is the case with this film, being billed as the first LGBTQ-centric narrative feature from Slovenia. Like many firsts, it is not completely successful but it does have elements to be admired all the same.

The film centers on Andrej (Matej Zemljic), a rebellious eighteen-year-old who does not believe in behaving like a model citizen. After an altercation with a girl he is involved with at a party, he is sent to a juvenile detention center. The conflicts continue when he brushes up against the facility’s established gang, headed by the especially cruel Zele (Timon Sturbej). The rivalry between these two eventually simmers to the point where Andrej is invited into the fold, participating in the shakedown schemes and drug deals. Soon, however, their friendship starts to show signs of something more intimate, and it leads Andrej to a path of self-discovery that is both self-illuminating and quite dangerous.

Director Darko Stante attempts to bring an intimacy to this story that feels more like a commentary about the dangers of toxic masculinity within young men than it does an earnest exploration of queer sexuality. He creates intentionally unlikable characters, though there is a struggle to cast them as relatable, particularly when their actions are painted in such extreme measures. It is difficult sometimes to get completely on board with the film because of that. The plodding pace of the film doesn’t help either. However, the grounded nature of the film helps to establish the connections between the characters. The nature of their hostility is linked to their bravado personas, and Stante does a credible job to reveal that festering nature within our society.

Zemljic does a nice job as the central figure and manages to carry most of the film’s emotional weight. While he is not given the most revolutionary portrait of an angry teen coming to terms with his own identity, he does manage to find moments of authenticity even when hampered by a pedestrian journey. To his credit, he manages to capture both the smoldering intensity of his anger, as well as desire to expose himself in a more vulnerable way. All of this is particularly felt in the film’s climax, arguably the best pieces of acting in the whole film, which is able to convey so much in few gestures. One has to admit that most of that success is due to Zemljic’s performance.

The rest of the cast does a serviceable job but never reaches the dramatic heights of its star. The only performer who even gets anything close to deep characterization is Sturbej. His showcase for violent rage feels quite genuine in every scene, and certainly has a menacing presence that can be quite effective. He sells the manipulative nature of the character, and his performance captures how the delicate balancing act between charmer and monster could flip on a dime. He is hindered by a script that does not fully explore his character, but he does a good job at making himself memorable in spite of that. The rest of the ensemble is capable but does not leave a lasting impact.

The performances from the two central figures are the main elements that drive interest in this film. They manage to carry a script that sometimes is not as interesting as their work. There are some pedestrian turns in the script that leads to some obvious reveals, and while none of it approaches downright terrible execution, it never quite feels like the film is exploring innovative territory. The relationships between the characters are still somewhat interesting, and it keeps you invested up to a certain point. At the very least, I am glad to see more countries of the world explore themes that focus on different communities. Hopefully, it invites other storytellers to come along and do the same.