The Women Of This Year’s Best Director Race 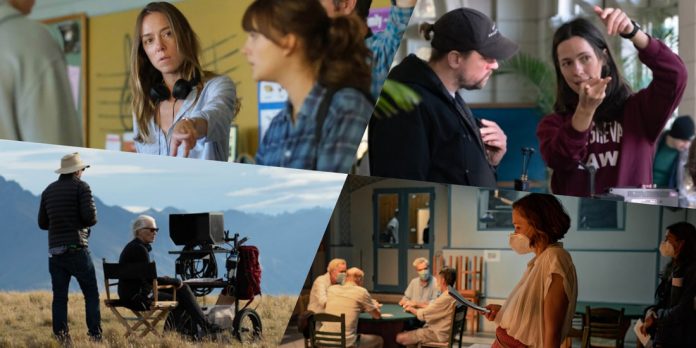 By Eve O’Dea
​
​This year’s Oscar race for Best Director is sure to feature faces both familiar and new to Academy voters. As seen at this past year’s various international film festivals, there has been no shortage of highly acclaimed films directed by women worthy of this honor. With Chloé Zhao being only the second female director in Academy history to win (the first being Kathryn Bigelow for “The Hurt Locker” in 2009), and last year being the first time two women had ever been simultaneously nominated, there is hope that this year’s slate will contain a greater diversity of voices.​

Jane Campion – “The Power Of The Dog”

New Zealand director Jane Campion became only the second woman nominated for Best Director at the Oscars in 1994 for her third feature film, “The Piano” – after becoming the first woman to receive the Palme d’Or at Cannes for the same title. While keeping a generally low profile in the film world since, her most recent feature, “The Power of the Dog,” has emerged as a frontrunner in the awards conversation since its debut at the Venice Film Festival, where Campion won the Silver Lion for Best Director. Following a third-place designation for the People’s Choice Award at TIFF and a special Director’s Tribute at this year’s Gotham Awards, the film is likely to receive Academy recognition for Benedict Cumberbatch’s lead performance, Kirsten Dunst’s supporting work, Ari Wegner’s gorgeous cinematography, Johnny Greenwood’s hauntingly beautiful score, and a possible second nomination for Campion, to go along with her inevitable nomination for Best Adapted Screenplay. As of right now, she’s the odds-on favorite to score a nomination with the Academy this year.

French director Julia Ducournau established her artistic boldness and narrative skill with her feature directorial debut “Raw.” She cemented her status as one of today’s most talented filmmakers with the almost undefinable “Titane,” landing the coveted Palme d’Or at the Cannes Film Festival – the second female director to do so after Campion. With Campion as a precedent, this could indicate a chance for Ducournau to enter the world stage with a bang. While not exactly the most Academy-friendly option on the list, “Titane” does have the backing of France, who has submitted the film as their candidate for Best International Feature. Ducournau’s fearless and masterful hand behind the camera makes this film one that audiences cannot ignore if they dare to see it.

We don’t know much about Nora Fingscheidt’s “The Unforgivable” yet other than it’s her follow-up film to her directorial debut “System Crasher” which showed a lot of promise for the German filmmaker. A drama based on the 2009 British miniseries “Unforgiven,” written by Sally Wainwright, it stars Sandra Bullock as a woman who is released from prison after committing a violent crime and is seeking her sister who she left behind. Viola Davis, Jon Bernthal, Rob Morgan, Aisling Franciosi and Vincent D’Onofrio also star. We’ll be sure to keep an eye on this one as it comes out in limited release on November 24th before hitting Netflix on December 10th.

Having received a nomination for Best Supporting Actress for her performance in “Crazy Heart,” Maggie Gyllenhaal is no stranger to the Academy. She has employed Academy darling Olivia Colman alongside it-girl Dakota Johnson for her widely discussed feature directorial debut “The Lost Daughter,” which won the Best Screenplay award at the Venice Film Festival. As an actor turned director, Gyllenhaal’s familiarity among Academy voters could work in her favor, giving her a unique position among the nominees.

Taking inspiration from her own personal experience, Rebecca Hall’s adaption of Nella Larsen’s 1929 novel, “Passing,” follows two African-American women who have chosen widely different paths for themselves. Irene, played by Tessa Thompson, lives in Harlem with her husband, a Black doctor, while Clare, played by Ruth Negga, is married to a wealthy racist white man and “passes” as a white woman in her day-to-day life. Hall’s chances for a nomination come from this story’s unique perspective, a distinct visual style, black-and-white cinematography, and her respected reputation as an actress. Ruth Negga’s performance as Clare has also been widely discussed as a possible contender for Best Supporting Actress, which will only help give the film more buzz as Netflix prepares to distribute the film.

The little film that could this year’s awards season is the Sundance Award-winning film “CODA.” Released earlier this year, Apple is not going to let us forget how much this charming indie film melted our hearts, and an ample reason for that is the writing and directing from ​Sian Heder. A story of a hearing teenage girl who must choose between her loyalty to her deaf family and her aspirations to be a singer, the crowd-pleasing film garnered some of the best reviews of the year. The ensemble cast’s wonderful performances will help keep this film in the conversation all season long, and ​Heder could come along for the ride.

Continuing where she left off with “The Souvenir,” Joanna Hogg’s meta-memoir has reached new heights with her critically acclaimed sequel, “The Souvenir Part II.” More thematically and technically ambitious, with the same personal touch that made the first film so deeply felt, Hogg’s sequel (a first for studio A24) is so pitch-perfect it even retroactively makes the first film even better as it continues the story of Julie (Honor Swinton Byrne) as she continues through film school after the death of her drug-addicted boyfriend. Already garnering the respect of several other filmmakers within the industry, Hogg’s artistic achievement should not go unnoticed this year. Now that audiences have seen the second half of the story, the complete picture of Hogg’s vision has come into focus, adding a more profound appreciation for both her filmmaking and life journey.

The fourth installment of “The Matrix” series, “The Matrix Resurrections,” could be an opportunity for director Lana Wachowski to obtain nominations in several categories as director, screenwriter, and producer. The original 1999 film won four Oscars for Best Film Editing, Sound Editing, Sound Mixing, and Visual Effects, which could possibly indicate the fourth film’s success in similar technical categories. While almost guaranteed to be a major box office hit, the film’s critical reception has yet to be determined. Though unlikely to receive as much fanfare as the 1999 original, it could perhaps garner enough esteem to land Wachowski a directing nomination, making her the first transgender woman to do so.

Following last year’s monumental win for “Nomadland,” there was significant speculation as to whether Chloé Zhao’s follow-up, Marvel’s highly anticipated “Eternals,” would land Zhao her second Best Director nomination, and a first for the MCU. With the unprecedented success of Ryan Coogler’s “Black Panther” at the 91st Oscars ceremony, the Marvel Cinematic Universe is no longer a stranger to the Academy. The film’s all-star cast and visual style have fans particularly excited for the possibility of its prominence during awards season. However, with somewhat lackluster early reviews, it’s unlikely that “Eternals” will be the film that gives Zhao her second shot or cement the MCU as a maker of prestige cinema. Still, we’re keeping an eye out for any residual love that may get thrown her way.

Do you feel there are any other women contending for a Best Director nomination this year? Who are you currently predicting to get nominated? Take a look at the Next Best Picture team’s predictions here and let us know your thoughts in the comments section below.