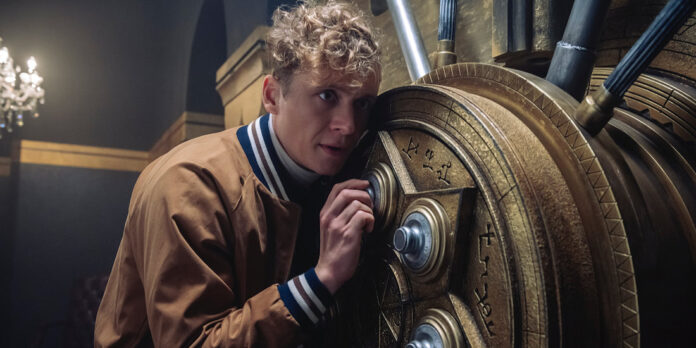 THE STORY – In this prequel to Zack Snyder’s Army of the Dead, small-town bank teller Dieter gets drawn into the adventure of a lifetime when a mysterious woman recruits him to join a crew of Interpol’s most wanted criminals, attempting to heist a sequence of legendary, impossible-to-crack safes across Europe.​

​Just as Zack Snyder’s “Army of the Dead” mixed a heist with a zombie movie, “Army of Thieves” combines elements of a heist movie and a rom-com. The story serves as a prequel to “Army of the Dead,” which was released earlier this year. But rather than Snyder at the helm, Matthias Schweighöfer, who also plays Ludwig Dieter, steps up to direct the prequel based around his character. What results is a film that, refreshingly, doesn’t take itself too seriously and is more focused on its character’s feelings than senseless blockbuster action.

The screenplay by Shay Hatten is based on a story by Hatten and Snyder that opens in Munich, Germany, just as the zombie outbreak is beginning to occur in America. For bank teller Sebastian (Schweighöfer), it’s only truly a concern in his nightmares and how it’s influencing the economic market. When better to pull off a heist than in a period of instability? The film opens with Sebastian (we’ll find out how he comes to be known as Dieter in “Army of the Dead” later in the film) making a YouTube video about the trio of safes made by Hans Wagner. He receives an anonymous invitation and ends up in a safe opening competition, which gives him the chance to prove his skills. He finds out that his video had been spotted by Gwendoline (Nathalie Emmanuel), a master pickpocket and unofficial leader of a group of misfit criminals. Korina (Ruby O. Fee) is a multi-talented hacker, Rolph (Guz Khan) is the getaway driver, and Brad Cage (Stuart Martin) is the brawn and, if you ask him, the leader. Gwendoline recruits Sebastian to join them in their quest to break into Wagner’s three vaults. The safes, Das Rheingold, the Valkyrie, and Siegfried, are known together as the Ring Cycle. Finding and cracking into all three will take the group across Europe and test their loyalties. Meanwhile, they’re being pursued by French law enforcement agents Delacroix (Jonathan Cohen) and Beatrix (Noémie Nakai).

Schweighöfer dances on the edge of being an annoying as the overly reactive Sebastian. He is confident to the point of arrogance in his ability to crack a safe but very nervous about pulling off a heist. Still, the same level of charm he brought to “Army of the Dead” wins out here, allowing him to lead the film in an entertaining enough manner.

This could have been just another heist movie, but instead, there’s a sense of fun rather than a danger to it. The film stylistically matches its light tone with a fun, bouncy score. It’s wrapped up in a romance, complete with a love triangle that adds more emotional moments. While Sebastian is overwhelmed by the group he’s found himself in, Gwendoline is calmly focused on the achievement of cracking all three safes rather than the reward itself. It’s not the most engaging romance, but the novelty of it within this movie helps it.

I’ve never seen a heist movie before in which the characters play beer pong in between missions, but it seems representative of this film as a whole. Sure, some of the funny moments don’t land, and the runtime is a bit too long. But the action sequences are divided by more emotional moments, and it’s a fun backstory for Schweighöfer’s character. Is “Army of the Dead” a film that needed to become a franchise? Perhaps not, but “Army of Thieves” is still a decently fun time that will probably exceed most people’s expectations.