“THE WOMAN WHO RAN” 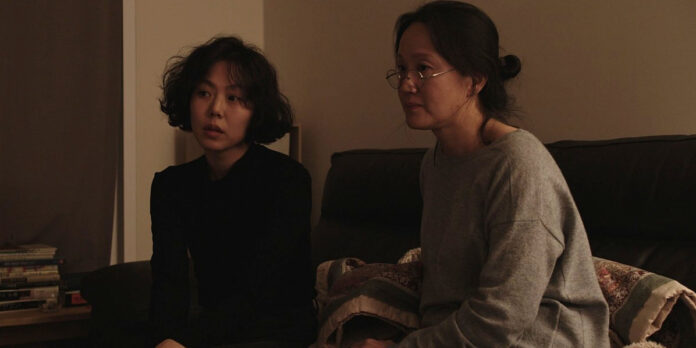 THE STORY – While her husband is on a business trip, Gam-hee catches up with three of her friends on the outskirts of Seoul. They make friendly conversation but there are different currents flowing independently of each other, both above and below the surface.
​
THE CAST – Kim Min-hee, Song Seon-mi & Lee Eun-mi

It was a delight to see Hong Sang-soo’s female-driven comedy-drama, “The Woman Who Ran,” walk away with the Silver Bear at this year’s Berlin Film Festival. It’s not often that I’ve experienced being present when an entire theatre erupts in such joyous laughter while watching a film. “The Woman Who Ran” is an unexpected delight. Sadly, what stops the film from being great is its slightly amateurish cinematography and a lack of real drama. However, there’s something so charming about Hong’s latest film that you cannot help but fall in love with it.

The film follows Gam-hee (Kim Min-hee), a young woman who visits three of her old female friends over the course of three days. Gam-hee’s husband has left town on a business trip, and it’s the first time she’s been away from him in five years. She spends the day with her friend, Young-soon (Seo Young-hwa), and the pair enjoy their rare time together eating food and talking about Gam-hee’s relationship. Gam-hee seems to be in love with her partner, but as the narrative unfolds, we get the impression that she feels slightly trapped in the relationship. It’s eluded to that she might be slightly envious of her friends and their freedom, especially Su-young (Song Seon-mi), a free-spirited woman who sleeps with various men.

On her final day of freedom, Gam-hee bumps into another friend, Woo-jin (Kim Sae-byuk) who’s married to an old flame of Gam-hee’s. The two women are pleasant with each other, there isn’t any drama or anger between the two of them; however, Gam-hee does find herself in an uncomfortable situation that many of us have encountered: the challenge of bumping into an ex-lover and having to address the past.

Hong’s film manages to capture the beauty of female friendship and the power of sisterhood. The film is littered with smaller scenes that capture this element beautifully. For example, there’s a scene where Gam-hee watches Young-soon on CCTV as she smokes a cigarette with a young girl from a troubled household. The two other women share a tender embrace and it’s such a powerful moment that reflects the connection as well as the respect that these two women have for each other.

The director’s also interested in showing the viewer isolated short snippets of life. The film feels unique in this respect, as the viewer feels like a fly on the wall, but it doesn’t propel the narrative. Various little scenes garner the most enjoyment and pleasure as well as the most laughs, but it’s a pity that there aren’t more comedic moments throughout the film to keep our interest from waning.

The performances, along with the script (also penned by Hong), are what makes the film so entertaining to watch. Kim Min-hee is wonderful as Gam-hee, a woman who’s experiencing freedom and independence for the first time in five years. Her character seems so naive and sheltered from the world, and throughout the course of the film, we watch her evolve and come out from her shell. However, the film leaves us in a sort of limbo. What will happen to her when she returns to her husband? Or will she continue to run away as the title suggests?

The supporting cast is also noteworthy, with each actress bringing so much energy and enthusiasm to their role. The three main scenes between the main characters all have their own tone and atmosphere to them, and even though the other women aren’t seen again throughout the rest of the picture, they’re all memorable after the credits have rolled. It’s not often that we see a film where women dominate the storyline and have so many scenes where they discuss subjects that aren’t focused on the male characters.

Where “The Woman Who Ran” falls short is in its cinematography by Kim Soo-min, who insists on zooming in on the characters in order to go from a long shot to a mid-shot. Why this decision was made is slightly baffling as it’s very distracting and it affects your immersion. It’s a real shame and becomes quite maddening by the end. This happens to be Hong’s 24th feature in 24 years, and there aren’t many directors who have such an impressive and prolific filmography. With “The Woman Who Ran,” he’s created a nice addition, although it’s let down by a short runtime and poor cinematography which hinders it from being a classic.