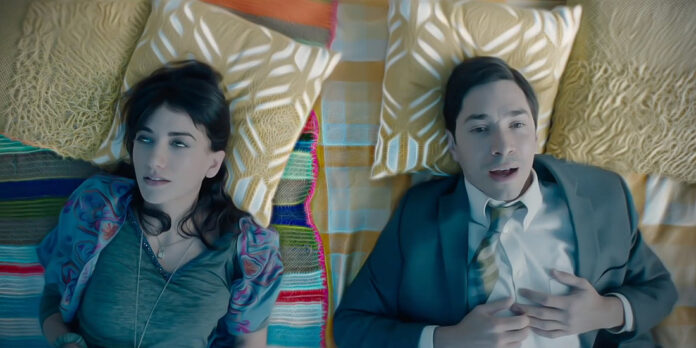 THE STORY – Frank, an opportunistic insurance lawyer, goes out on the town to celebrate an upcoming promotion with his co-worker, Jeff. But their night takes a turn for the bizarre when Frank is dosed with a hallucinogen that completely alters his perception of the world.

Gille Klabin’s “The Wave” is unlike anything else you’ll see this year. It’s beautifully bizarre in all the right ways; bursting with hypnotic surreal imagery and a non-linear, head-scratching narrative that will leave you puzzling over the film way after the credits roll. “The Wave” isn’t a film that you can simply switch off your mind, sit back and watch, but requires you to observe the screen carefully – every little detail may have a hidden meaning. Some may find the film’s surrealism and wackiness a little too much to handle, but “The Wave” has the potential to gain a dedicated cult following.

The film follows Frank (Justin Long), a bored corporate lawyer who’s in a loveless marriage with his wife, Cheryl (Sarah Minnich). Frank has been working at his company for six years, and he’s on the cusp of getting the biggest promotion of his life. His friend Jeff (Donald Faison) urges him to go out and celebrate (“It’s a Tuesday,” Frank exclaims at this suggestion). Eventually, Frank reluctantly agrees to join Jeff on a night out that they won’t soon forget.

The two of them find themselves at a club talking to two women, Natalie (Katia Winter) and Theresa (Sheila Vand). Frank hits it off with Theresa, who sees past his façade. The two men decide to follow the women to a house party in order to keep the celebration going. It’s at this house party where Frank encounters a mysterious drug dealer (Tommy Flanagan) who convinces Frank to try a drug that’ll hit him “like a wave.” This is a trip like nothing Frank has ever experienced. When he wakes up the next morning, he has no recollection of the night before, so he must retrace his steps. This isn’t just a case of “Dude, Where’s My Car?” but more like “Dude, Where’s My Mind?” as Frank is still tripping. It could be that he might not be tripping and the universe is trying to tell him something.

While the film’s narrative and set-up may seem like a rehash of “The Hangover” or the aforementioned “Dude, Where’s My Car?” (or basically any comedy from the early 2000s), “The Wave” isn’t a boorish, gross-out comedy but something operating on an entirely different level. There is comedy here, especially with the introduction of another drug dealer called Ritchie (Ronnie Gene Blevins), but Klabin and writer Carl W. Lucas are less interested in making the viewer laugh and more interested in making you think.

This is quite a personal film to Lucas, as he wrote it after the death of his cousin (a firefighter). Lucas’s cousin died of a heart attack, and because he was on heart medication, the insurance company held out on his pension, leaving his family penniless. This is similar to the case that Frank is working on during the film, and the film’s climax sees him trying to decide whether to do a selfless or a selfish act.

As Frank’s trip unfolds, his reality starts becoming more and more surreal, blending into wonderful animation and playing with slow motion. There’s one scene in which an important board meeting takes place. As Frank’s situation becomes more stressful, his grasp on reality loosens and it becomes a warped living nightmare. Cinematographer Aaron Grasso makes good use of low and high angles, as well as tracking shots which add to the film’s surreality – it’s a beautiful treat for the eyes. The editing by Lana Wolverton is another highlight, with some inspired cut on action techniques being used which keeps our attention even when the narrative struggles to find its footing.

Justin Long was drawn to the story as he saw it as a “psychedelic parable,” and he gives a good performance. However, there are times where his character feels a little cliched and it’s difficult to relate to him. The other characters (especially the female characters) feel very underdeveloped, but the actors do their best with the material given. Perhaps the reason for this is down to the film’s runtime, which is a lean 90 minutes; the action starts going into maximum overdrive in the last 20 minutes, with the story and characters barely pausing for a breath.

It’s a shame that the conclusion feels rushed because the viewer doesn’t get to experience the full emotional impact that Lucas and Klabin were going for. This isn’t to say that Lucas’s writing isn’t decent, but there are so many ideas going on that some of them aren’t fully explored or well-executed.

Overall, “The Wave” and Klabin are trying to do something new and it’s a film that invites people to rewatch it, one gets the feeling that there’s dozens of Easter Eggs to find hidden within the film. Certainly, the film won’t be to everyone’s taste, it can be quite alienating and hard to follow at times, but it’s definitely something uniquely different and it’s great to see Justin Long tackling a film as wild as this.