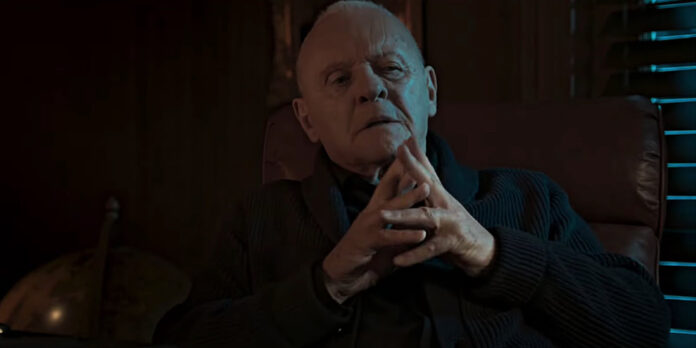 ​You’re a critic. A person who has devoted countless hours to watching and writing about film: after a year of being locked inside, you miss the communal experience of watching films in a theater and hearing the audience’s reaction. But you soldier on, watching anything that comes across your inbox, honing your eye, and sharpening your poison pen. A trailer catches your eye. A thriller about an assassin with a killer cast and some very aggressive strings on the soundtrack: “The Virtuoso,” it’s called. You hope for a screening, to experience the film for the first time alongside others, feeling the suspense, guessing what will come next. You get a screener and sigh. At least this one will play on your TV without having to move your computer and deal with a tangle of cables.

At the start, you’re intrigued. The latest “Star Trek” Captain, Anson Mount, is an incredibly handsome lead, and his voiceover narration is compelling. He narrates in the second person, putting the audience directly in his shoes—the shoes of a killer. But something is off. It’s… funny? Or at least, it has a mordant sense of humor. At least, the way Mount has completely cleared his voice of any effect makes you think it does, especially when paired with his performance, a near-pantomime of a sharpshooter assassin. It’s grounded, yes, but just big enough when paired with the heavily stylized narration to make it feel like… no. It can’t be. This is far too heterosexual to be camp… right?

Then Anthony Hopkins comes on screen. How embarrassing to see him playing a generic heavy after his Oscar-winning performance in “The Father,” one of the greatest performances committed to film. But Sir Anthony knows from bad films and knows precisely what to do when he’s in one. You note how he is sinking his teeth into his big monologue like it is a piece of red meat in front of a hungry lion, how he swans about in his dark sunglasses and lets loose the famous Hannibal Lecter grin when threatened. Oh, yes. This is camp, alright. Then Abbie Cornish comes in with a femme fatale smirk in blue-collar clothes, and she, too, seems to know exactly what kind of movie she is in. You think to yourself: This isn’t what you expected, but you’re having a good time with it.

Then something goes awry. The film is playing with genre tropes, but the tone becomes more and more confused, caught between taking itself dangerously seriously and having fun. The longer the film goes on, the more lost Mount becomes. It is only natural, you think. He has the central role, and that is where the director’s guiding hand is going to be most apparent. But how could the director not know what’s happening here? Why won’t he commit to making this a full-on, nudge-nudge-wink-wink deconstruction of the assassin/spy thriller when the script’s hard-boiled dialogue is clearly leading the actors there? There is something inherently strange about ’40s detective novel-style dialogue coming out of the mouths of people in the 2020s, and the film walks right up to the line of embracing that strangeness and making fun of it but can’t quite bring itself to cross it. The film becomes awkward and ungainly. The fun mystery aspect of the plot (the Virtuoso is sent to kill someone at a diner in the middle of nowhere with the phrase “white rivers” as his only clue) is fighting for dominance with the character drama (the film opens with the Virtuoso making a last-minute hit that takes an innocent’s life in a way that shakes him to his core). You start shifting around on your couch, unsure of what to think. You abandon your customary note-taking practices as you grapple with how to watch the film – is it camp? Or is it serious?

The film ends after a stomach-churning 110 minutes, and you sit on your couch stunned into silence. You are unsure. You are scared. Has all of this time watching films alone in the “comfort” of your own home completely stripped you of your ability to read a film, to determine how it will play in front of an audience? You usually begin writing your review immediately after viewing a film, but you take some time to sleep on this one instead. All night you wrestle with it. How can you review the film if you still don’t know if it was meant to be serious or not? The most genuine examples of camp are those things that strain so hard to be serious that they end up failing spectacularly. But “The Virtuoso” doesn’t fail, exactly, so much as it seems stuck somewhere between the diametrically opposed poles of knowing camp and straight seriousness, sometimes leaning one way, sometimes the other. And that’s when you realize: It doesn’t matter which one it is, because it’s mediocre at both. You sit down at your computer and begin to write, blowing through words at a higher rate than you ever had before. The review pours out of you in the voice of the film’s addictive second-person voiceover. You chuckle at the conceit. After time has passed, you only remember the parts of the film you liked but are still stuck with the feeling that the film doesn’t live up to its potential. If it had fully committed to playing it straight and serious, or if it had fully embraced the camp in its heart, then it could have been something amazing. You’re sure of that. Instead, it’s right in the middle: Not great, but not bad, either. You reach the end of your review and feel a sense of accomplishment. You have done it again. You have seen a film, formed an opinion, and written a well-reasoned critique. You have infused it with style. You chuckle reading it back to yourself. This is good. Very good. You make a gun shape with your finger and blow the smoke away. You are good. Some might even say you’re… a virtuoso.