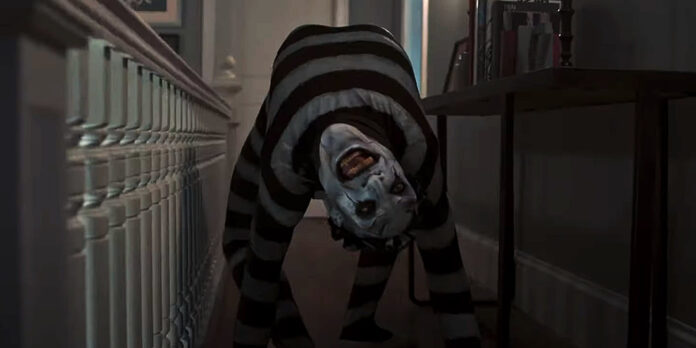 THE STORY – A lonely little girl finds solace in her artist father and the ghost of her dead mother.

​​​Horror is and will continue to be an intriguing and provocative genre. It can indulge in the general pleasures of becoming enveloped in entertaining scares while also creating strong allegories to real-life trauma and hardships. The best entries in this landscape have the ability to showcase both, and that is where true artistry is appreciated. However, the list of works that accomplish these visions well are dwarfed by the countless others that leave little to no impression due to their mundane results. Unfortunately, “Separation” falls into this group and ends up being a forgettable exercise that doesn’t offer much that differentiates itself from what came before.

The film centers around Jeff (Rupert Friend), an out-of-work artist who has never been able to recapture the fame he once gained years ago with a graphic novel he created with his wife Maggie (Mamie Gummer). The conflict is heated between them now, with an ugly divorce and custody battle on the horizon. However, Maggie is suddenly killed in a hit-and-run incident, leaving Jeff alone with their daughter Jenny (Violet McGraw). As the two attempts to adjust to their new lives, a sinister haunting begins. Ghostly apparitions start plaguing their minds; some are modeled after characters Jeff has created, and others are new figures that taunt him endlessly. It doesn’t take long for the situation to become direr and, eventually, the true nature of these poltergeists will be revealed.

Whether one is looking to be thoroughly entertained through suspenseful terror or acknowledge a deeply probed character study, they will sadly not find either here. The script by Nick Amadeus and Josh Braun trades on pedestrian tropes that are quite worn out now, with minimal effort made to make any of these decisions feel innovative. The characters are flat, the themes shallow, and the emotional catharsis is stilted in every scene. None of what’s on the page is elevated by William Brent Bell’s direction either. The filmmaking never reaches a level that truly impresses, more often being the contributor to a laborious pace and some genuinely uninspired scary sequences. The moments meant to induce fright in an audience are poorly executed, for sure. However, they also rely on demonic visions that are formulaic in their design and opaque in their motivations. This is perhaps the deadliest sin committed, as a stale narrative could be forgiven with creative scenes of tension. Sadly, they land with a great dud here.

The featured performances are also not particularly noteworthy, though credit must be given to this ensemble for at least delivering serviceable work. Friend has an affable screen presence that can be read as a bit bland but is effective for the character’s emotional state. It’s not an excellent portrayal, but it’s a nicely grounded turn. The same goes for Gummer, probably the most realistic character, who makes an impact in her short screen time. Brian Cox shows up as the father-in-law in a role he could sleepwalk through, and Simon Quarterman is a grating presence whenever he’s on screen. The other roles belonging to the likes of McGraw and Madeline Brewer as a family friend aren’t anything special and actually suffer when the material asks for more range from them. Overall, the cast here is by no means exemplary but is more than capable of delivering more substantial achievements.

It’s a shame that “Separation” decides to feature so many elements that have been seen in previous horror films because one could see the potential at its core. There is an interesting premise that can comment on the nature of grief while also delivering some effective frights. Sadly, the tedious pace and dull sequences do not make the material engaging, nor does a hollow screenplay with weak characters. The actors do their best, but very little they offer can salvage the end results. This is yet another formless excursion into this genre that takes nods from the past without ever creating a unique ordeal for itself.