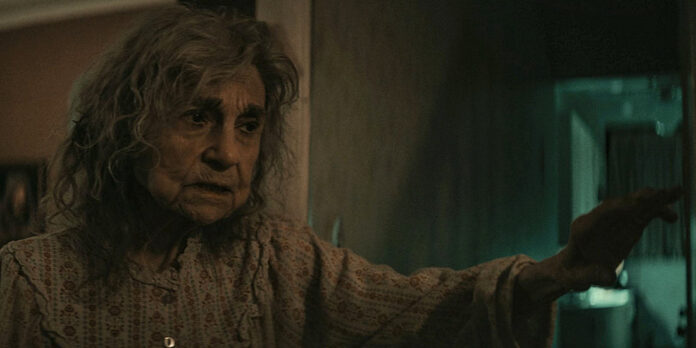 THE STORY – A young man agrees to fulfill the duties of a “shomer,” the ritualistic practice of looking after a dead body over the course of one night.​
​
THE CAST – Dave Davis, Menashe Lustig & Malky Goldman

​”Always leave ’em wanting more,” the saying goes, and novelist-turned-director Keith Thomas proves he knows exactly how to do that in his debut feature, the spine-tingling spiritual horror flick “The Vigil.” At just under 90 minutes, “The Vigil” is one of the most ruthlessly efficient horror films in recent memory, knowing exactly how to make sure not a single one of its scenes overstays its welcome. Drenched in atmosphere, the film locks into a mood early on and deepens it with each scene until the climax and let’s go at the very end with a sigh of deep spiritual relief. Appropriate for a story about a man forced to sit all night with the dead body of a man who believed he was being haunted by a demon, and by all evidence still may be, even in death.

Yakov Ronen (a fantastic Dave Davis) has left the strict Orthodox Jewish community where he grew up and is trying to adjust to a life outside the community. We first meet him at a support group made up of other similar people, where he is content to observe quietly. When asked to speak, he fumbles about nervously, saying he’s concerned about paying rent and finds himself having to choose between medication and meals. What good luck, then, that the Rabbi who has been stalking him now actually wants to pay him to do a service: A shomer (in Jewish ritual, one who watches over a dead body until it gets buried, providing comfort to their loved ones and making sure the dead are not abandoned before they go to their new home in the ground) has left his post suddenly, and Yakov has experience. He just has to sit with a dead body for five hours while the man’s Alzheimer’s-addled wife sleeps… and if doing so happens to feed his soul and bring him back to the community, so be it!

As you might have guessed, Yakov’s task turns out not to be so easy. No sooner does he arrive then the widow (a perfectly cat, Lynn Cohen) tells him to leave, and not long after that, he sits down to begin his watch. Then the noises start, and the visions come. Thomas and his team pull out every trick in the book to scare us, and while it may not end up being particularly scary, it is exceptionally creepy. The atmosphere is thick right from the start, with the eerie green light coming from the back of the house, a nauseous companion for the room’s red lights with the body. There is constant noise on the soundtrack, be it the droning strings of Michael Yezerski’s score, the thuds and hisses of an old house at night, or the supernatural cracking and crunching of bones. The rare moments of silence are excruciating, allowing neither Yakov nor the audience – nor, for that matter, the dead Mr. Litvak – a moment of peace. Even when Yakov passes out for a moment of sleep, he’s haunted by a traumatic memory. This is, of course, what Mr. Litvak’s demon wants: Pain (we learn about the demon in the film’s most ingenious scene, one in which Thomas’s control over the film’s atmosphere is so strong that it doesn’t feel even remotely like the exposition dump it is).

The atmosphere Thomas and his team create envelops the audience in its long, spindly claws and before you know it, it has you in a vice grip, unable to breathe. The hallucinatory climax is a full-on sensual assault that the film has been steadily building towards. While it may stretch the film’s minuscule budget to the breaking point, it’s still hard to look away because of the methodical work the film has done up to that point. Like a great short story, “The Vigil” keeps the stakes low and the atmosphere high, creating a mood that elevates everything even when the plot goes a bit too far. In fact, the mood is so strong that one comes away from the film wishing it had sustained its terrific tension even longer and delved deeper into its central characters and mythology. But even still, “The Vigil” stands as an excellent debut, marking Keith Thomas as one to watch.