​The Unique Way The MCU Uses Its Directors 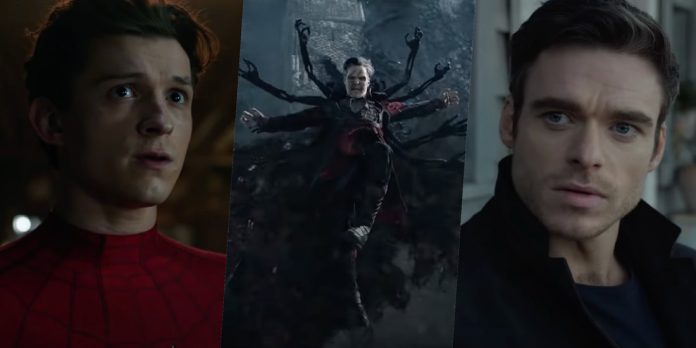 Marvel has changed cinema. This statement is less of an opinion and more of a bona fide fact, as the Marvel Cinematic Universe’s success has influenced how films are produced, marketed, and released. They even have the unfortunate effect of devouring the box office and leaving little meat on the proverbial bone for the competition – just look at any film released around the same time as last year’s “Spider-Man: No Way Home.” But a less obvious and somewhat surprising aspect of the MCU’s self-invented way of doing things is the way they use their directors. Ostensibly the leading voices of any film production, Marvel has established such a defined blanket style that frequently, the directorial voice on some of their films feels somewhat suppressed. Even still, some visionary filmmakers have been able to join their defined stylistic preferences to the traditional Marvel look and feel. The newest film in this comic book canon is the upcoming “Doctor Strange In The Multiverse Of Madness,” directed by the legendary Sam Raimi. Can his unique sensibilities overcome the standardized ways of Marvel?

The preeminent superhero studio has an interesting approach when it comes to selecting the directors that will shepherd their comics from the page to the screen. Speaking generally and unscientifically, these directors can be grouped into two categories: directors with a small handful of credits before their MCU debut and directors with greater name recognition and an already defined style. The filmmakers in the former category have been instrumental in helping craft some of the most important parts of the MCU, and therefore, they curiously are both responsible for shaping the general mise-en-scène of the shared universe and are in some ways beholden to the style and sensibilities of those who came before them. Most notable of the directors who worked within this near-paradox are Anthony and Joe Russo, and Jon Watts. In their own ways, these directors have overseen some of the most culturally impactful films in the blockbuster saga – the Russos, in addition to directing the second and third “Captain America” films, were given the unenviable task of coalescing a decade’s worth of stories and characters into the endcap films “Avengers: Infinity War” and “Avengers: Endgame.” While Jon Watts helmed the third iteration of Spider-Man this century with his films starring Tom Holland as the friendly neighborhood spandex-wearer: “Spider-Man: Homecoming,” “Spider-Man: Far From Home,” and “Spider-Man: No Way Home.” All these films were critical and commercial successes, with “Avengers: Endgame” becoming momentarily the highest-grossing film of all time. Similarly, “Spider-Man: No Way Home” became the first film since the COVID-19 pandemic began to earn $1 billion worldwide. Clearly, audiences appreciate what these directors are presenting them.

What’s further interesting about these directors, and about nearly all the directors who fall into this category, is that their filmographies were limited prior to their admittance into the Marvel clubhouse, and subsequently, their current reputations as filmmakers are nearly entirely defined by their superhero films. The Russos had only two films to their name before making “Captain America: The Winter Soldier” – the comedies “Welcome To Collinwood” and “You, Me and Dupree.” Up until then, their resumes were jam-packed with television episodes. Watts also had just two films to his name prior to becoming the MCU’s go-to Spider-Man director – “Clown” and “Cop Car.” Before he made these films, he mainly was a music video and short film director. Because of their comparatively shallow filmographies, these directors had less of a defined signature stamp to their filmmaking before joining the MCU. Therefore, the superhero films they directed have a visual sense that, while not necessarily being anonymous, certainly have a less specified style than those made by, say, Taika Waititi or Ryan Coogler.

Which brings us to the second category of Marvel directors: those who were already well-known as name-brand filmmakers when they were brought into the comic book universe. Marvel’s reasons for doing this are obvious. Besides already being proven successful in shepherding a film to a satisfying end product, these directors are tried and tested in terms of their artistic taste and achievements. Plus, they give the MCU a greater level of respect for bringing auteur voices into the fold. These directors include, among others, Kenneth Branagh (“Thor“), Shane Black (“Iron Man 3”), Taika Waititi (“Thor: Ragnarok“), Ryan Coogler (“Black Panther“), Chloé Zhao (“Eternals“), and Sam Raimi with the upcoming “Doctor Strange In The Multiverse Of Madness.” While these filmmakers have established visual and emotional trademarks that they often bring to their movies, working within the Marvel machine requires them to occasionally bend their artistic sensibilities to fit within the MCU box. That’s not to say that these films don’t have personality; for example, “Thor: Ragnarok” has a cheeky comedic tone that’s distinctly thanks to its director, and Zhao brings patience and mature weight to “Eternals” not usually found within the Marvel canon. Still, with the level of previsualization that these films are known to go through to fit both the Marvel house style and the overarching story being told within this universe, it’s not hard to imagine that these directors have slightly less freedom on these films than they would on a smaller, more personal project.

An interesting point of comparison is to look at how the competition treats its directors. The films adapted from DC Comics within the past decade have, without a doubt, been less successful in their ability to charm critics and the general public. That’s not to say they don’t have their fans (tweeting anything about Zack Snyder is a surefire way to get his legions of supporters engaged). Still, compared to Marvel, the quantifiable measures of cinematic success – whether it be box office receipts or aggregated critical scores – have been lower for DC overall. However, this has had the unintended effect of the studio allowing more leeway for their directors to do what they wish with their beloved comic book properties. While the filmmakers roped into the MCU must mute their directorial personalities to some degree in order to fit within the brand, DC seems to be more open to their filmmakers taking big swings and overlaying a more unique style onto their movies. The DC Extended Universe began with one authorial voice commanding the artistic ship, with Snyder directing the first two films released under the banner (“Man Of Steel” and “Batman v Superman: Dawn Of Justice“) and famously partially directing a third (“Justice League“). Besides Snyder, directors such as Patty Jenkins (“Wonder Woman” and “Wonder Woman 1984“), James Wan (“Aquaman“), and Cathy Yan (“Birds Of Prey“) give their films such a jolt of personality that, besides sharing characters, the films practically stand on their own visually and thematically outside of the greater DC universe. And while it’s not technically part of the DCEU, “Joker” became the first comic book film to score a Best Director nomination from the Oscars for Todd Phillips’ brooding, nihilistic work.

One particularly noteworthy chapter for this studio was their hiring of James Gunn after his unceremonious firing (before being rehired) by Disney. He directed the no-holds-barred, schlock-fest that is “The Suicide Squad,” and it’s interesting to note the differences between what he was allowed to do on this film compared to his two “Guardians Of The Galaxy” films. While his Marvel movies are undeniably filled with a true uniqueness and specific authorial voice, particularly in the misanthropic comic tone, he was clearly allowed to do whatever he pleased with “The Suicide Squad.” It looks quite different from his “Guardians Of The Galaxy” films, and it’s completely unencumbered in every way.

“Doctor Strange In The Multiverse Of Madness” is Sam Raimi’s first film as a director in nine years. It must be assumed that Disney offered Raimi some tantalizing perks to get him to break his hiatus; behind the scenes, we already know that certain kindnesses were given to Raimi, such as allowing him to cast his longtime collaborator Bruce Campbell and striking 35mm celluloid prints of the movie – something rare for the film industry in general and basically unheard of for Disney. And these favors may be worth their while, as the wave of nostalgia for the Raimi-directed “Spider-Man” trilogy is at its highest in years thanks to “Spider-Man: No Way Home.” But only time will tell if that real-world favoritism extends to allowing Raimi an unbridled directorial vision in the finished film.

Are you excited to see what Sam Raimi will bring to “Doctor Strange In The Multiverse Of Madness?” How do you feel about the way the MCU uses its directors to fit Kevin Feige’s vision? Please let us know your thoughts in the comments section below or on our Twitter account.