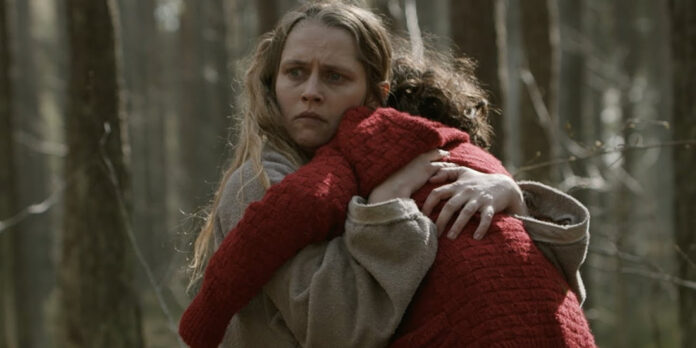 THE STORY – Following the aftermath of a tragic accident that claimed the life of one of their twins, Rachel and Anthony relocate to the other side of the world with their surviving son. What begins as a time of healing in the quiet Scandinavian countryside soon takes an ominous turn when Rachel begins to unravel the torturous truth about her son and confronts the malicious forces that are trying to take hold of him.
​
THE CAST – Teresa Palmer, Steven Cree, Tristan Ruggeri & Barbara Marten

​​​​Horror has always been used to serve as an externalized metaphor for trauma, but seemingly now more than ever; scary movies revel in the physical manifestation of the terrifying thoughts and emotions that usually stay locked in one’s psyche. While it’s certainly not a new formula, the modern horror landscape is jam-packed with artfully minded films that turn characters’ inner demons into tangible boogeymen. Taneli Mustonen’s new film, “The Twin,” is the latest in this overstuffed corner of the scary movie market. While made with care, it unfortunately never rises above the conventional, trendy trappings of the genre.

Rachel (Teresa Palmer) and Anthony (Steven Cree) are a young couple who suffer an unimaginable tragedy when a car accident takes the life of one-half of their pair of identical twin boys. The surviving twin, Elliot (Tristan Ruggeri), consequently becomes the focus of over-attention from Rachel, who is obviously terrified of losing him like his deceased twin, Nathan. Seeking to start a new chapter in their shattered lives, the family moves from New York City to Anthony’s home country of Finland. But this new environment only serves to exacerbate the tension that Rachel is feeling. As events begin to take a supernatural bend, she finds herself fighting for the very soul of her beloved son, no matter the cost.

Palmer is the film’s anchor, and her harrowing performance is undoubtedly the movie’s greatest strength. Burdened with a cliché screenplay, she’s miraculously able to excavate a complete character out of the writing. Most impressively, she’s able to consistently discover new angles and depths to her character’s unending terror. Just when it seems like she’s reached the end of her rope, Palmer reveals a new level of Rachel’s fear and anxiety. She’s both sympathetic and frustrating in her actions, driven by always-present grief. Ruggeri also turns in an applaudable performance, believably playing an excited child, which only makes his later scenes filled with anger and rage all the more surprising.

However, the overall film doesn’t provide a steady foundation for the actors. At times, it feels like a greatest hits mashup of current horror movie tropes and storylines. Any audience member with a passing knowledge of the slate of modern-day fright flicks shouldn’t have a difficult time predicting where the plot is going. That’s not to say that a film that uses conventional story beats and elements is by nature a lesser one, but it does mean that it must work a bit harder to prove itself as worthy and different. Unfortunately, “The Twin” never quite achieves that. Even worse, outside of two yelp-inducing jump scares, it’s not very scary. The most effective filmmaking elements are found in Rachel’s dream sequences, which are filled with dramatic and symbolic imagery that indicates an appreciated level of attention from the director.

As “The Twin” wanders its way towards its conclusion, it takes a repetitive and expected path to get there. Still, horror movies are often a great place to find captivating central performances from lead actresses, and this film is no different. Teresa Palmer’s startling portrayal of a mother facing some of the worst situations for a parent just might make “The Twin” worthwhile.