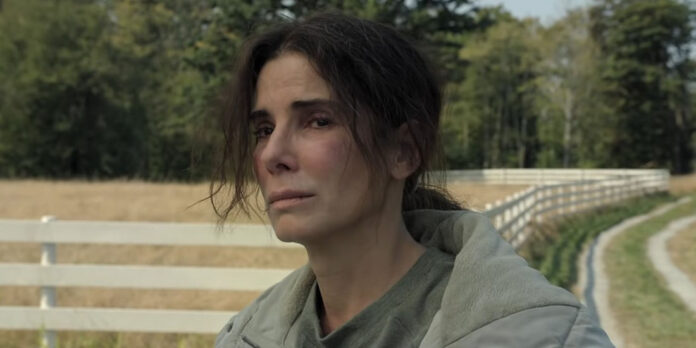 ​Characters in movies do stupid things all the time. Mainly, this can be explained away with the old “if they didn’t do this stupid thing, then there would be no movie” maxim. This is more of a feature than a bug with horror films, where half the fun is screaming at the characters not to do the stupid thing you know they’re going to do. But in more grounded dramas, like Netflix’s latest “original”/exercise in mediocrity, “The Unforgivable,” it’s much more frustrating. Partially, this is because we want the characters to be more intelligent than they are, but more than that, it’s because when a film is clearly supposed to take place in the real world, it breaks the illusion of reality when characters act in a way that real people wouldn’t, shining a light on the heavy hand of the filmmakers as they manipulate us into what they want us to feel. “The Unforgivable,” based on a British television series, wants us to think long and hard about what life is like for a convicted felon after they get out of prison and try to rebuild their life, about whether or not it is fair that they walk around with a scarlet letter after they have paid their debt to society and what they could possibly do to prove to the world that they have learned from their experience. But when every character makes such stupid decisions – indeed, often the worst possible decision – at every moment, it’s hard to garner any sympathy for them.

“The Unforgivable” is the story of Ruth Slater, played by Hollywood’s favorite steely-yet-squishy actress Sandra Bullock. She has just been released from prison after serving twenty years for a violent crime, which we see flashes of throughout the film. She has one thing on her mind: Reconnecting with her much younger sister Katie (Aisling Franciosi), who has no memory of what happened to her as a child before she was adopted. Ruth has written Katie many letters over the years but has never heard back, and she needs to know that she’s okay; court orders to stay away from her be damned.

It’s a pulpy plot ripe for a morality play, then, with some fantastic actors to guide us through. In addition to Bullock and Franciosi, we have Rob Morgan as Ruth’s take-no-bull parole officer, Jon Bernthal as a co-worker with an attraction to Ruth, Richard Thomas and Linda Emond as Katie’s adoptive parents, and Vincent D’Onofrio and Viola Davis as the couple who are now living in the farmhouse where the crime took place. Very few actors could make this screenplay feel natural and real, and everyone does yeoman’s work in trying to elevate it into something resembling actual human behavior. Bullock does as well as she can, portraying Ruth as a shell of a person fixated on her goal above all else. Ruth knows better, but having spent at least half her life in prison and staring down a future that looks bleak as hell. She does not care about what the “right” thing to do is. This would work, except for the fact that all of Ruth’s terrible decisions lead to a third act so divorced from reality and yet completely predictable as what would happen in this type of movie that all sympathy for her is ripped away. All of the film’s most dramatic scenes are almost entirely unworkable on the page, but the performers put them over through the sheer force of will. Their actions still stretch the suspension of disbelief to the breaking point, but when you look at it from just the right angle, it makes a kind of movie-logic sense. But the film’s mid-point reveal of the truth of Ruth’s crime is one of the most bone-headed pieces of screenwriting of the year. This twist makes the film more morally complex for all of three minutes (while Bullock and Davis are on-screen processing it) before it goes back to not mattering in the slightest, never to be spoken of again.

The film at least looks and sounds good, with cinematographer Guillermo Navarro composing some striking images and Hans Zimmer providing an involving score. Director Nora Fingscheidt keeps things moving nicely despite a few wonky cuts from editors Joe Walker and Stephan Bechinger. But it all comes back to that screenplay, which asks too much of its actors and even more of the audience. Try as the performers might, they just can’t turn these characters into real people because they aren’t so much characters as they are devices to move the plot in the desired direction to make the audience think very hard about the film’s themes. It’s easy to see why actors would be drawn to these kinds of roles given the complex moral quandaries at play, but the screenplay never earns their investment in the characters. By the time “The Unforgivable” is over, you won’t be pondering the real-world implications of the film’s themes so much as shaking your head and muttering, “Only in the movies.”