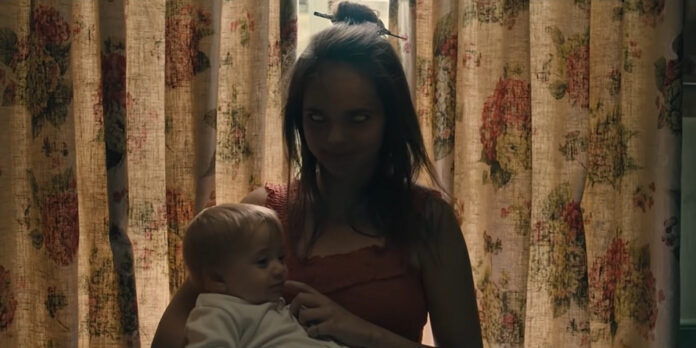 THE STORY – A British Army doctor comes home from war believing herself to have PTSD, but soon discovers that there is a more daunting malevolence at work, making the life that she previously knew unfamiliar.
​
THE CAST – Jemima West, Christopher Dane, Rebecca Hanssen, Hary McMillan-Hunt & Rachel Lin

​​​​Horror films have long been used to explore psychological terrors that can afflict people. As long as we’ve been putting scary stories on film, writers and directors have used movies to turn non-visual existential threats into personified monsters. “The Unfamiliar,” the new horror film from director Henk Pretorius, is yet another entry into this specific area of scary movies. And this time, the monster preying upon our veteran protagonist is a combination of combat PTSD and the inherent anxieties of being a parent. In theory, this could make for a spooky yet poignant film. Unfortunately, “The Unfamiliar” is not very scary, choosing to rely heavily on easy jump scares and outlandish scenarios rather than genuinely horrific moments.

Our main character is Elizabeth “Izzy” Cormack (Jemima West). At the film’s start, we see her returning from Afghanistan to her family back in the UK. Waiting for her at home is her loving husband Ethan (Christopher Dane), non-biological daughter Emma (Rebecca Hanssen), younger son Tommy (Harry McMillan-Hunt), and baby girl. Almost immediately after getting back home, things seem off to Elizabeth. Strange noises, unpleasant hallucinations, and objects moving on their own become an increasingly common occurrence to her. The matter isn’t helped by her husband’s newfound fascination with demons from native Hawaiian folklore – an obsession that’s also adopted by her impressionable son. While she initially believes these to merely be the effects of PTSD, it soon becomes clear that something more otherworldly may be to blame.

While the film sets up the potential storyline of Elizabeth’s troubles being mostly due to the mental effects of being at war, this possibility is quickly brushed off by the film. By the time the film’s second act rolls around, we find ourselves improbably watching a film that has devolved into a body-swapping, mystical-tinged story. The domestic, small-scale premise that’s initially set up keeps expanding in ambition and heft of story until we have no idea where the film is going. This may seem like a point of praise, but when confusion and bemusement are the primary reactions elicited by a film, it has lost its way.

“The Unfamiliar” may be winding and unexpected in its storytelling methods, but the story itself is reminiscent of a good number of other scary movies. Most notably, the film at times seems practically like a remake of “Insidious.” The rising action of the plot, the general look of the film’s initial locations, and even some specific shots are so evocative of James Wan’s film that they almost seem like intentional homages when they almost certainly are not. The similarities don’t invite a flattering comparison.

The film may not be all that scary, but its practical effects deserve praise. Too often, low budget independent horror films rely on the Band-Aid of cheap, unrealistic CGI to conjure up their supernatural images. For the most part, “The Unfamiliar” uses good old-fashioned makeup and practical effects to evoke a reaction. However, too often the film uses cheap, easy jump scares rather than building tension and dread to scare its audience in a more affecting and substantial way.

It’s always disappointing to see a horror film with a decent premise that doesn’t live up to its full potential. A few commendable practical images can’t make up for a meandering story that’s ultimately not scary.