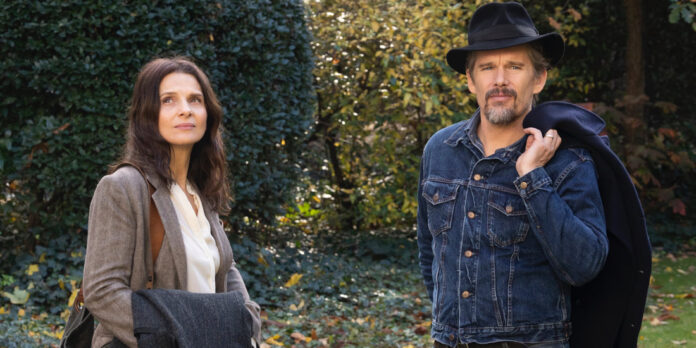 THE STORY – A stormy reunion occurs between an actress and her daughter after the actress publishes her memoirs.

​At first glance, “The Truth” might seem to be an outlier in director Hirokazu Kore-eda’s filmography. After all, this film marks the first time that the Japanese director has shot a movie outside of his native country (“The Truth” was shot on location in Paris) or worked in a language other than Japanese (the dialogue in “The Truth” is in both English and French). If that wasn’t enough pressure, the film marks the first time that Kore-eda has worked with bona fide movie stars: Oscar nominee Catherine Deneuve, Oscar winner Juliette Binoche, and four-time Oscar nominee Ethan Hawke. Yet beyond the location, the language, or even the stars, “The Truth” is very much a Kore-eda film. The director’s favorite canvases for his stories involve family and the challenges and dysfunction contained within them, and “The Truth” provides him with ample material to explore that subject to get to the truth.

Fabienne Dangeville reigns as the leading lady of French cinema, and in many ways, she is French cinema, as she would be the first to tell you. In real life, for example, her equivalent would be Catherine Deneuve. Kore-eda wisely dismissed any idea of casting an actress to play this Deneuve-like character. Why do that when you can cast Deneuve herself? Fabienne has just finished her memoirs, so to celebrate the book’s publication, her screenwriter daughter, Lumir (Juliette Binoche), has flown over from New York with her alcoholic American husband, TV actor Hank (Ethan Hawke), and their very young daughter, Charlotte (Clémentine Grenier). When Lumir finally reads her mother’s book, however, she’s shocked when she realizes just how much of it is simply made up to make Fabienne look good and how very little of it is the truth.

Fabienne is currently shooting a science-fiction film in Paris, a role she took only so that she could closely work with Manon (Manon Clevel), a young actress who bears a striking resemblance to the late actress, Sarah Mondavan. Sarah was extremely close to Fabienne and her entire family, yet Fabienne has inexplicably erased Sarah from her memoir, a move that Lumir finds puzzling.

The family dynamics in “The Truth” are always shifting so that we’re never quite sure just who’s currently sided with who, and the changing alliances make for some of the most intriguing scenes in the film. In fact, the only major weakness in “The Truth” is when we shift away from the family with repetitive scenes on the sci-fi film set. The similarity between the mother/daughter relationship in the film Fabienne is starring in and the bond between Fabienne and Lumir is made succinctly in the first on-set sequence. But we return to the same set again and again, with that same story point repeated each time we return. We got it the first time. It would have been far more productive if Kore-eda kept the focus on those characters at home.

Just a word about Clémentine Grenier as Charlotte. When we’re first introduced to the character, Charlotte is playing the way little girls do, but as the film progresses, she gains more confidence until the film’s climax when she dares to ask her mother about “the truth” in question. Coming from Charlotte, the question has the impact of a punch to the gut. To my mind, Kore-eda is the foremost director of children working today. In such films as “Still Walking,” “Like Father, Like Son,” and in particular, “Nobody Knows” (in which all the main characters are kids), Kore-eda often brings out remarkable performances from his young actors, many of whom were non-professionals. And Clémentine Grenier here is no exception.

Though “The Truth” doesn’t approach the greatness of Kore-eda’s masterpieces, “After Life” and “Shoplifters,” it’s still a strong Kore-eda feature. Though located far from the director’s usual Japanese settings, the fact that the Paris family in “The Truth” reveals the same concerns as families in other Kore-eda films only underlines the same universal truths (and problems) that families around the world continue to share.