“THE TRUE HISTORY OF THE KELLY GANG” 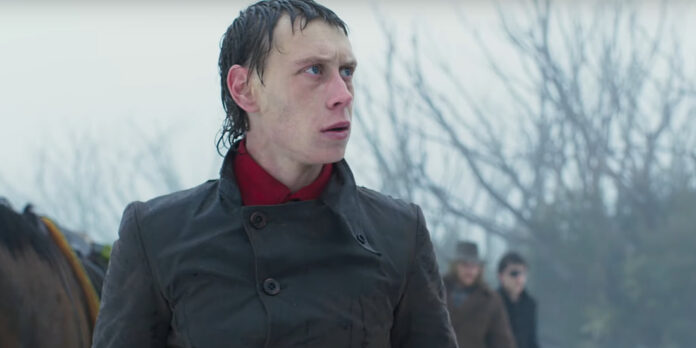 ​​​​“Are we gonna rewrite our own history?” asks a muddy George MacKay, with eyes caked in eyeliner and standing half-naked in the snow in front of a band of equally chaotic young men wearing dresses. For all its title might claim, “True History of the Kelly Gang” is a loose and highly-stylized retelling of the legend of Australian outlaw, Ned Kelly. Based on the novel by Peter Carey, Shaun Grant’s script plays hard and fast with the facts of Kelly’s life, more interested in character study and bleak cinematography than truth.

The bushranger and gang leader who was executed in 1880 is the subject of more biographies than any other Australian. Justin Kurzel’s take on the larger than life figure is hardly the first film about Kelly. In fact, the first feature-length film in 1906 was “The Story of the Kelly Gang” and at least nine other films, along with television series, plays, and songs have been written about him. In 2003, Heath Ledger played the titular role in “Ned Kelly.” It might seem that it’s a topic that’s exhausted, even if an American audience knows far less about him than an Australian one does, but Kurzel’s take is fresh and exciting.

The film opens on a young Ned, played excellently by newcomer Orlando Schwerdt who balances grief, shame and pride. The Irish Kelly family lives in a ramshackle hut where Ned’s mother (Essie Davis) is visited by Sergeant O’Neill (Charlie Hunnam) while his father does little. Ellen Kelly encourages her son to be tougher than his father, telling him, “You’re going to be everything he isn’t.” Ellen manipulates Ned onto his eventual path of crime, building up the idea of the importance of being a Kelly and fighting back. Davis plays the role with a cold fierceness mixed with frightening love that seems almost Lady Macbeth-esque.

After Ned’s father dies in prison, his mother apprentices him to a bushy-bearded, pipe-smoking outlaw Harry Power (Russell Crowe). Crowe plays Ned’s mentor with an edge underneath a veneer of warmth; though he only has a few violent scenes, it always seems to be lurking under the surface. Crowe sings and plays guitar in the film, a brave move for a man who has yet to live down his (honestly overly-criticized) performance in “Les Misérables.” The handful of folk songs sung in the film are combined with a tense score and a rock song to create a soundtrack as unpredictable and jumbled as the film itself.

When the film introduces us to an older Ned, he’s fresh out of serving a prison sentence and determined to live a straighter life, but is quickly pulled back into his family’s seedy world. While the film certainly has its share of blood and violence, it portrays less of his criminal activity than one might expect, preferring to examine his relationships. The film invents a romance between Ned and a soft-spoken young mother, played by Thomasin McKenzie, who shines even though she doesn’t have that much screen time. However, it also portrays a warm affection between Ned and his friend, Joe Byrne (Sean Keenan), as they often playfully roughhouse with each other. These relationships help humanize Ned Kelly and Keenan’s teary-eyed horror when his friend first displays signs of bloodlust is haunting.

Nicholas Hoult plays Constable Fitzpatrick, the symbol of the British rule in Ned’s adulthood to mirror that of Hunnam’s Sergeant O’Neill in his youth. While O’Neill had designs on his mother, Fitzpatrick is interested in his younger sister. And yet, there’s also a sexually charged tension between Fitzpatrick and Ned himself. Hoult makes for a terrifyingly calm villain who seems to also dance on the edge of sanity.

For all that the supporting cast offers, it’s MacKay’s movie, which becomes clear in the last third as Ned leads a gang of young men on the run. He portrays an almost Shakespearean descent into seeming madness. In one scene, he howls like a wolf standing half-naked in a forest with blood streaked down him. This film is nothing if not bold. His band of warriors attempt to stick it to the British rulers in any way possible, while garbed in dresses that they claim make the English fear them.

The film is wildly anachronistic, caring for its period setting as little as it does for historical accuracy. The costuming combines modern and period pieces and the men are often dressed in women’s clothing – when they’re dressed at all.

The film is certainly not a standard biopic, but rather, a highly stylized Western character drama. It paints a rough world full of violence and bleakness. The distinctive cinematography makes the most of the nature that the film is mostly shot in, using cool lighting and grimy production design to further the melancholy of the characters. However, there is an action scene that ineffectively uses shaky hand-camera and awkward close-ups on MacKay and two different scenes that are nearly unwatchable because of the use of strobe lighting.

“True History of the Kelly Gang” embraces the legend of the man rather than the man himself, while also making a subtle statement about the English oppression of the Irish and how it contributed to Ned Kelly’s life of crime. Kurzel seems to agree with the bushranger in the film when he says, “A myth is more profitable than a man.”