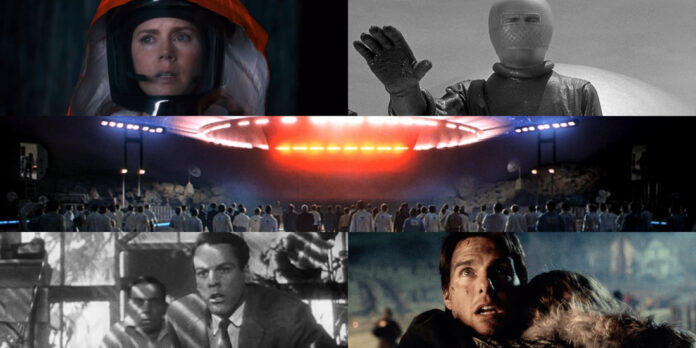 Hollywood has always loved high-concept films, and few concepts are higher (metaphorically and literally) than aliens. It brings with it the fear of annihilation, the excitement of discovery, and the faith that we as a species can unite with (or against) our extraterrestrial visitors. How’s that for drama?

Jordan Peele’s “Nope” is now in theaters, and it’s the latest release to mine these topics for mind-bending entertainment. The director has been transparent about his influences and desire to pay homage to the science fiction of the past, so we felt it only proper to apply our tinfoil hats and revisit the best alien invasion films of all time.

Some ground rules before we begin: we did not include films in which aliens landed prior to the events of the film. “District 9” (2009) and “Edge Of Tomorrow” (2014) are terrific sci-fi films in their own right, but they’re less about invasion and more about dealing with the political fallout. Our list is going to focus on the direct results of an invasion and how the main characters deal with it.

“War of the Worlds” is ground zero for alien invasion stories. H.G. Wells’ novel captivated readers in 1898, and Orson Welles’ radio adaptation horrified listeners in 1938, so it was only fitting that a master like Steven Spielberg gave it the blockbuster treatment in 2005. There are some significant changes to the source material, updating the setting and the characters to reflect a post-9/11 world. Still, Spielberg manages to instill a similar feeling of paranoia and chaos.

The invasion scenes are underrated showcases for the director. The pacing, the gritty camera work (there’s a quick POV camcorder shot, anticipating another good invasion flick, “Cloverfield” [2008]), and the special effects result in moments that are still awe-inspiring nearly two decades later. The solid Tom Cruise performance doesn’t hurt, either. “War of the Worlds” loses steam in the final act, which keeps it from classic status, but it remains a highly entertaining gateway into the rest of our list.

J.J. Abrams has become a polarizing figure thanks to his “Star Trek” and “Star Wars” reboots. We get it. He’s an emulator more than an originator, and he relies on the aesthetic pioneered by men like Spielberg and George Lucas to guide most of his creative decisions. Now that we’ve acknowledged these shortcomings, we’re here to say that “Super 8” (2011) is still awesome.

With this sci-fi throwback, Abrams did “Stranger Things” earlier and more succinctly than the actual “Stranger Things.” There’s a ragtag bunch of kids, an alien force taking over a small town, and a focus on interpersonal dynamics that makes the film’s conclusion doubly satisfying. It’s nothing we haven’t seen before, but Abrams’s instincts are right on the money here, and the result is eminently rewatchable. When it comes to Spielberg forgeries, you could do much worse.

“The Vast of Night” (2019) is the least-seen film on the list, and if you’re one of the people who haven’t seen it, please do so ASAP (it’s currently on Amazon Prime). The film, set in 1950s New Mexico, takes place over a single night and follows a switchboard operator (Sierra McCormick) and a disc jockey (Jake Horowitz) as they attempt to find the source of an otherworldly broadcast.

The effects are minimal, the dialogue is plentiful, and the takes are long. There’s no CGI spectacle or star power to hide behind here, and writer/director Andrew Patterson proves he doesn’t need it. He pulls dazzling performances from his actors, and the tension is so masterfully doled out that you sometimes forget that you’ve been watching an operator fumble with phone lines for ten minutes. “The Vast of Night” is “Twilight Zone”-esque in the best possible way, and Patterson is the real deal. Keep an eye on him.

“Arrival” (2016) is unlike any other invasion film because it takes a realistic approach to what an “invasion” might look like. Aliens don’t land and start lasering people to death; they try to make contact with our government and learn more about our way of life. It takes forty minutes to meet the aliens in “Arrival” because director Denis Villeneuve understands that the anticipation behind an existence-altering event is just as ripe for exploration.

Amy Adams and Jeremy Renner are terrific as the specialists who attempt to communicate. They consistently straddle the line between being overwhelmed and eager to learn more about their alien peers (“Abbott and Costello,” as they’re affectionately known). The stakes rise as “Arrival” progresses, but the film’s core theme remains: understanding one another is our only hope.

From nuance to literally punching aliens in the face, “Independence Day” (1996) is nonsense in the best possible way, in that it takes all of the cool ideas and ridiculous tropes of alien invasion movies and folds them into a slick blockbuster format.

Roland Emmerich never got closer to his dream of being Spielberg-lite than he did here, and if the desired comparison wasn’t already clear, he cast Jeff Goldblum and had him recreate the “must go faster” scene from “Jurassic Park.” We also have peak Bill Pullman, the end of peak Randy Quaid, and the start of peak Will Smith, each of whom gets to deliver iconic, quotable lines in instantly recognizable scenes. Don’t think too hard about it (and don’t think about the sequel at all). “ID4” just works.

We now come to another director who was poised to be the next Spielberg. We’d say take a shot every time the maestro’s name gets brought up, but that would do more damage than water does to the aliens in “Signs” (2002). M. Night Shyamalan’s third film has been mocked for its easily defeated antagonists, but to get hung up on the water angle is to ignore some of the best writing and directing of his entire career.

“Signs” is textually about crop circles and subtextually about fate. Mel Gibson and Joaquin Phoenix play brothers who are undergoing crises of faith, and a looming alien invasion forces them to place their experiences within a greater context. The setup/payoff structure that often falls flat in Shyamalan films works beautifully here, as does the decision to keep the aliens hidden (except for one amazing scene involving a birthday party– you know the one). The director has become a model of diminishing returns, but “Signs” is a stellar reminder that, at one point, he was the real deal.

Don Siegel was the brain behind brawny classics like “Dirty Harry” (1971) and “Escape from Alcatraz” (1979), but the director could also transcend action trappings, as evidenced by his masterpiece “Invasion of the Body Snatchers” (1956). The titular body snatchers have landed on Earth and begun to replace the inhabitants of a sleepy town, leaving only a small group to spread the word.

Much has been made of the film’s themes, with some considering the aliens to be an allegory for McCarthyism and the Red Scare movement that gripped America in the 1950s. The fact that “Body Snatchers” can be enjoyed as an allegory and a simple fantasy simultaneously is a testament to its strong construction. We’d also like to recognize the 1978 remake and its clever swapping of McCarthyism for the post-hippie malaise. They make for a depressing yet incredible double feature.

It feels like any sci-fi list would be incomplete without John Carpenter’s towering classic “The Thing” (1982). It’s a case study in paranoia, a clinic in body horror, and a chilling account of what could happen when a ferocious alien is let loose on a group of unsuspecting researchers. We know very little about the titular thing, and the fact that it stays that way through the film’s final moments only furthers the unsettling tone that Carpenter is going for.

“The Thing” has a lot in common with “Invasion of the Body Snatchers,” only here, the idea that we could warn people of the impending invasion is null and void. The research team, led by a murderer’s row of character actors (and Kurt Russell), are screwed, and they slowly come to accept that mankind is also screwed. Bleak, brilliant stuff.

“The Day the Earth Stood Still” (1951) is the granddaddy of great invasion films. It tells the story of an alien named Klaatu (Michael Rennie), who comes to Earth to share an important message with humankind. Things get invariably complicated from there, including Klaatu’s relationship with widow Helen (Patricia Neal) and the government’s violent response to his presence.

The effects are obviously dated, and some of the stilted sci-fi jargon has become so iconic that it is hardened into cliche. Still, “The Day the Earth Stood Still” excels on the strength of the cast and the nuanced direction of Robert Wise. Both camps manage to relay a message about peace and understanding without resorting to mawkish sentimentality. We can’t say the same for the 2008 remake.

All roads lead back to Steven Spielberg. The director who helped codify the modern blockbuster with “Jaws” (1975) delivered one of the most striking and ambiguous blockbusters of all time with his follow-up, “Close Encounters Of The Third Kind” (1977). The film spins a multifaceted narrative involving a government scientist (Francois Truffaut), a grieving mother (Melinda Dillon), and a man (Richard Dreyfuss) obsessed with finding proof of alien life.

The film has too many iconic moments to list here. It also functions, thematically, at least, as an outlier in the Spielberg canon. So many of the director’s heroes are saved by their practicality and ability to stay grounded when faced with otherworldly phenomena. On the other hand, Dreyfuss’s character abandons his family and livelihood to learn the truth. The profound sadness of this choice is balanced out by the wonderment of what he might find (and what we might see, depending on which version of the film you prefer). It’s a fine line, and “Close Encounters Of The Third King” walks it with the grace of a ballet dancer.

Have you seen “Nope” yet? If so, what did you think? What is your favorite alien invasion film of all time? Please let us know your thoughts in the comments section below or on our Twitter account.