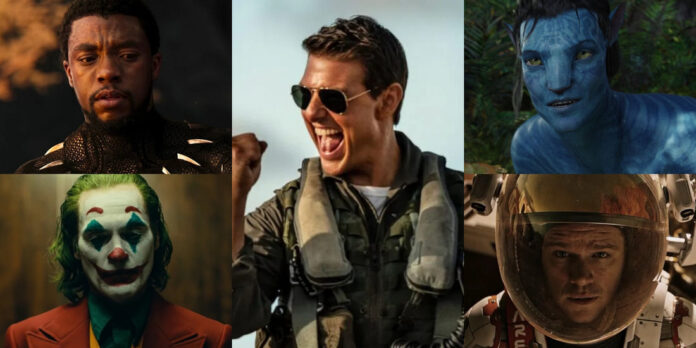 Back in the old days, that is, in the earliest decades of the Academy of Motion Picture Arts and Sciences, one could predict the winner of the Academy Award for Best Picture by simply taking into account the top 10 highest-grossing films of a respective year. For much of the Academy’s history, there was an almost guaranteed correlation between the year’s Best Picture winner and its financial success at the box office, indicating a more significant overlap in the attitudes of audiences and Academy members than today. Granted, times have changed. There are more movies for people to see today, with a broader range of genres and more access to see them than ever before. However, the change is still worth considering as we continue asking the question every year if box office matters to the Best Picture Oscar race anymore.​

In 1927, the year’s highest-grossing film was William A. Wellman’s “Wings,” produced and distributed by Paramount. It would be the first of many films during the Academy’s early decades to be both well-received by its voting body and financial success among audiences. From the 1930s-1960s, each decade had only a handful of Best Picture winners that did not make the list of the top 10 box office earners of the year. In the 1970s, every film that won Best Picture was a top 10 box office earner in its respective year, with 1979 being the high point as Best Picture-winner “Kramer vs. Kramer” was the no. 1 highest grossing film for that year.

Then, at the turn of the century, something started changing… With the exception of “The Lord of the Rings: The Return of the King,” which won both Best Picture in 2003 and was the highest grossing film of that year, no Best Picture winner was among the top 10 highest grossing films of its respective year since the year 2000 (“Gladiator“). This all culminated in 2008 when that year’s highest grossing film, “The Dark Knight,” did not receive a Best Picture nomination and prompted the Academy to re-evaluate their nominating rules for the Academy’s top prize, which resulted in 10 nominees in 2009 and 2010, before moving to the sliding scale from 2011 until last year, where we’re now back to a straight 10 nominees for Best Picture. Only a few films nominated for Best Picture since 2000 have been top-10 box office hits:

Notably, the last film to achieve this accomplishment, “Joker,” was a comic book film, the type of film that regularly dominates the current box office. Fans of Marvel’s “Spider-Man: No Way Home” advocated for the film’s Oscar recognition last year for the simple fact of its financial success, as advocates believed a film’s public appeal should be considered when choosing the year’s “Best Picture.” Instead, the Academy introduced the #OscarsFanFavorite and #OscarsCheerMoment to last year’s ceremony to increase online engagement and live viewership numbers instead of giving blockbusters a Best Picture nomination. Unfortunately, the Academy’s attempt to appeal to mass audiences led to minimal returns in terms of viewership and ridicule from movie lovers and critics. Not to mention the unfolding story suggests a great deal of votes cast towards “Zack Snyder’s Justice League” and “Army of the Dead” were perpetrated by online bots.

The truth is, the Academy has not drastically changed the types of movies they’ve historically recognized with Best Picture nominations with a few exceptions here and there. But now, the Academy and the majority of North American audiences no longer see eye-to-eye in terms of a film’s recognition. Does this matter? For audiences, not so much, but for the Academy, probably. It’s safe to say that a very small percentage of viewers of Marvel, DC, and other cinematic universe films actually care about how many Oscars their favorite film of the year wins. But it does lead to the obvious result of fewer viewers turning to the Academy Awards to see their favorite films of the year celebrated. How this happened becomes a bit of a chicken-and-the-egg scenario. What was the trigger? What changed first: the audience’s tastes, the Academy’s, or the films themselves? Probably, as with all cultural evolutions, the answer is a mix of all three. Back in the 1920s, 1930s, and 1940s, the production, distribution, and exhibition of movies were entirely controlled by only a few studios. Now, the playing field has dramatically expanded, with an unlimited number of artists having their work produced and distributed by countless independent studios onto dozens of streaming platforms. Not to mention the staggering amounts of modern media platforms that pull viewers’ attention away and make it a challenge to sit still in the dark for two hours. At the same time, advanced computer-generating technology has allowed the biggest films to be produced and released more frequently. All things considered, the odds of an overlap between the highest grossing film and the Best reviewed film of the year are significantly lower than they once were.

This year, however, may feature an Oscar contender that has defied box office expectations while standing as one of the best-reviewed films of the year so far: “Top Gun: Maverick.” The film recently crossed the $1.2 billion mark, becoming the highest-grossing title of megastar Tom Cruise’s career, the year 2022, and the 10th highest-grossing film of all time. At the same time, reviews have been almost universally positive from major critical bodies, creating further cultural buzz around the movie and serving as a much-needed boost for movie theatres that many thought was obsolete due to the COVID-19 pandemic. To be realistic, it is improbable that “Top Gun: Maverick” would ever win the Oscar for Best Picture, and is certainly not a shoo-in for a nomination, especially in a season set to be occupied by such directors as Martin Scorcese, Steven Spielberg, Damien Chazelle, Todd Field, and Sarah Polley. Still, the film could manage to dominate several technical fields, akin to last year’s “Dune” or “Mad Max: Fury Road” back in 2015.

While I am certainly not an advocate for recognizing a film for anything but its technical and artistic merit, it may be in the Academy’s best interest to give “Top Gun: Maverick” the recognition so many audiences believe it deserves on top of its technical and artistic achievements. It’s a film that takes a nuts-and-bolts approach to filmmaking with little emphasis on CGI, harkening back to the Best Picture nominees of old that utilized star power, good ol’ fashioned storytelling, and in-camera cinematic techniques to dazzle and entertain. It reminds voters, especially older voters, of what movies used to be, and that’s a powerful factor to consider. Just because something makes money doesn’t mean the Academy automatically nominates it for Best Picture. There are so many other factors involved in the process. However, when a technical achievement at this level of quality achieves the popularity “Top Gun: Maverick” has (and additionally, doesn’t threaten to turn the cinematic world into a monotonous CGI’d monopoly), it only makes sense based on the films they’ve nominated in the past that the Academy would recognize this over other blockbusters seemingly manufactured in a lab to make money and nothing else.