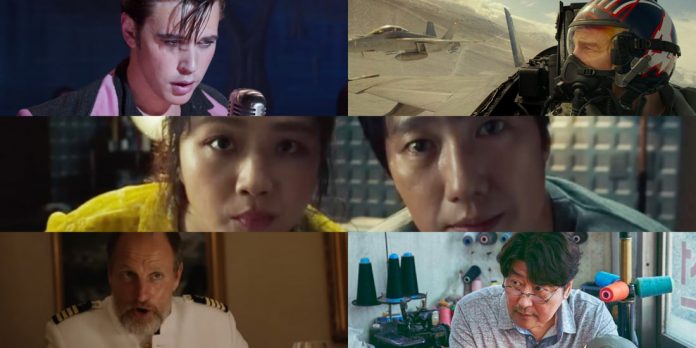 Another Cannes Film Festival is in the books. The 75th edition, which ran from May 17-28, was filled with several memorable moments — from a squadron of fighter jets streaking across the Riviera skies to a sole political activist streaking across the Palais red carpet. From the film critics and Twitter devotees on the scene, the consensus appears to have jelled that this was a decent festival, with a few outstanding titles, many good films, and only a few outright duds (“Forever Young,” we hardly knew ye).

Twenty-one films competed for this year’s Palme d’Or, the results of which were announced at the annual closing ceremony on Saturday night. Swedish director Ruben Östlund’s English-language comedy “Triangle Of Sadness” won the Palme d’Or, awarded by a jury led by French actor Vincent Lindon (who starred in last year’s Palme d’Or winner, “Titane“). The Grand Prix was shared by Lukas Dhont’s well-reviewed Belgian entry “Close” and by Claire Denis’ “The Stars at Noon,” the latter of which received a decidedly mixed critical response. Acting prizes went to Song Kang-ho for “Broker” and Zar Amir Ebrahimi for “Holy Spider,” while the festival’s Best Screenplay prize went to Tarik Saleh for his script for “Boy From Heaven.” And, as many expected, Park Chan-Wook was named Best Director for his acclaimed work on “Decision To Leave.”

Now that the dust is settling after this year’s festival, talk has turned (as it inevitably does around these quarters) to whether any of these Cannes Film Festival winners have the endurance to make it through the grueling awards season ahead. Cannes has always influenced the Oscars — just last year, “The Worst Person In The World,” for which Renate Reinsve was named Best Actress, went on to earn a pair of key Oscar nominations, including Best Original Screenplay and “Drive My Car,” which won the festival’s Best Screenplay prize, went on to earn four Oscar nominations (including Best Picture), winning for Best International Feature Film. But do any of this year’s Cannes entries look to have the stamina necessary to get to the stage of the Dolby Theater on March 12th?

Looking at this year’s lineup of films, both in and out of the competition, here are five takeaways I’d like to offer about their chances for Oscar:

1. How much of an impact will the Palme d’Or win for “Triangle of Sadness?”
It certainly can’t hurt. With this important tool in its arsenal, NEON, who is distributing the film and had previously led “Parasite” to Oscar glory, can now use the film’s raised profile to fashion a top-tier awards campaign to garner industry attention. The film’s premise may prove to be a bit too far out for a Best Picture play, but, despite notable performances by Woody Harrelson and Dolly de Leon, the film’s best Oscar chances may lie with its editing, and directing, and (most likely) Östlund’s much-buzzed-about screenplay.

2. Did the Cannes premiere affect the awards chances for “Top Gun: Maverick?”
Definitely. From the colorful contrails of the “Top Gun”-style jets flying over Cannes to the smilingly ubiquitous presence of Tom Cruise throughout the festivities, Paramount scored a flawless launch of the highly-anticipated sequel, which played out of competition. Below-the-line attention seems almost a given, with Oscar nominations likely for the film’s sound, editing, cinematography, visual effects, and original song. Could it even be Best Picture material? Indeed, “Top Gun: Maverick’s” 97% RT score puts it well within the range for films that should be considered for nomination. But seven months from now, will the Academy feel the need to reward this sequel 36 years in the making with a Best Picture nod?

3. How does Cannes set up the Oscar race for Best International Feature Film?
This year, two of the major films in competition hailed from South Korea — Park’s “Decision To Leave” and Hirokazu Kore-eda’s “Broker.” Both movies earned enormous praise from critics, and each won a major prize: Song Kang-ho’s Best Actor win for “Broker” and Park Chan-wook’s directorial victory for “Decision To Leave.” While whichever film South Korea designates will likely be the Best International Feature Film category’s instant frontrunner, both films are likely to contend in above-the-line categories. Another country that has a difficult choice as to its Oscar representative this year is Belgium, which had three of its films win prizes this year — the Dardenne Brothers’ “Tori and Lokita,” which garnered the siblings a Special Award; “The Eight Mountains,” which shared this year’s Jury Prize; and, the most likely choice, Lukas Dohnt’s sensitive drama “Close,” which has been picked up for U.S. release by A24.

4. What are we going to do about “Elvis?”
Unsurprisingly, “Elvis,” which screened out of competition, is less a standard musical biopic and much more a Baz Luhrmann spectacular-spectacular. Though reviews were wildly divergent — several high-profile critics were extremely negative on the film — most reviews were favorable enough to garner a respective 80+% on RT, certainly not an Oscar disqualifier, with Catherine Martin’s costumes and production design the film’s most likely contender. The big question is the film’s new soon-to-be humongous star, Austin Butler. His performance in the title role was the one element most critics seemed to single out, and starring in a musical biopic is often an express train to an Oscar nomination. However, a June release date makes for an awfully long journey to January’s Oscar nominations. The question comes down to this: is Austin Butler the new Rami Malek in “Bohemian Rhapsody?” Or is he Taron Edgerton in “Rocketman?”

5. Did any stealth Oscar contenders emerge from this year’s festival?
Opportunities for Oscar nominations from this year’s Cannes Film Festival do not all lie with the festival’s award winners. For example, the highly-anticipated “Crimes of the Future” and “Three Thousand Years of Longing” may have disappointed some critics, but both films’ hairstyles and makeup received strong notices. For a category that’s not afraid of out-of-the-box nominations (ahem, “Bad Grandpa”), this pair could be real contenders for Best Makeup & Hairstyling. In addition, in the Best Documentary Feature category, last year’s victory by “Summer of Soul” could pave the way for a nomination for Brett Morgen’s “Moonage Daydream,” a look at the life and career of David Bowie for which the filmmaker was given unfiltered access to over a thousand hours of never-before-seen footage from the Bowie archive. It’s receiving a massive push from NEON, with a visually striking trailer propelling audiences to see the film in IMAX. Such an experience may pay off in the end.

On the long, long road to the Oscars, the Cannes Film Festival has always proven to be a key festival in the awards year as it sets the table for what lies ahead. Some years, the festival may only have a few Oscar contenders emerge, but in others, as in 2019 with “Parasite,” the Cannes Film Festival proved to be the entire ballgame. If the quality of the films seen at this year’s festival reflects the film year ahead, we may have quite a cinematic feast to enjoy in the months to come.

Which films are you most looking forward to seeing from this year’s Cannes Film Festival (you can vote on our latest poll asking that questions here). Do you see any Oscar potential for the films which premiered at this year’s festival? Please let us know your thoughts in the comments section below or on our Twitter account.