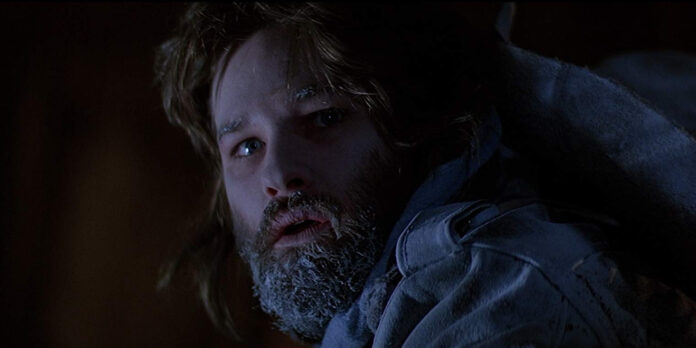 ​THE STORY – In remote Antarctica, a group of American research scientists are disturbed at their base camp by a helicopter shooting at a sled dog. When they take in the dog, it brutally attacks both human beings and canines in the camp and they discover that the beast can assume the shape of its victims. A resourceful helicopter pilot (Kurt Russell) and the camp doctor (Richard Dysart) lead the camp crew in a desperate, gory battle against the vicious creature before it picks them all off, one by one.

Seen as John Carpenter’s commercial failure, “The Thing” is a horror masterpiece that has only gotten better with age. It has not only been resurrected as a cult classic but is now also revered by modern film critics and historians. “The Thing” is a masterpiece in every sense of the word, from Carpenter’s direction, to the creature design, to the performances from the ensemble and everything else in between. “The Thing” is a masterclass in terms of how you should approach making a horror film. It shows us the terror of the creature, while also forcing us to relish within the fear that is generated between the characters themselves. The monster doesn’t have to be the only thing that is scary, but how our characters react to said monster or monsters can be equally as terrifying. Standing the test of time as one of the greatest body horror films of all time, John Carpenter’s “The Thing” is a film that people will still be talking about twenty years from now.

While a research team is set up in Antarctica. they are hunted by a shape-shifting alien that takes the form of whomever or whatever it kills. Causing mayhem among the research team and wreaking havoc to their facility, the team must figure out how to kill the alien while also deciding who is who they say they are and who is a bloodthirsty, “otherworldly” being.

“The Thing” clocks in at a solid 109-minute run-time and it wastes none of it jumping right into the terror, opening with the introduction of the alien into the research facility (though neither us or the characters know that yet). Although the film clocks in at just under two hours it feels like such a breeze to watch. It doesn’t spend time setting up pointless subplots or developing meaningless character tropes. Carpenter’s ability to build tension through the mystery is downright brilliant and few have done it as well as he has since. He crafts the tension of the film through both the characters trying to figure out who the alien is disguising itself as and the wedge that drives itself between the group as a whole.

Carpenter knows that adding a horror element that is different than just the alien itself will add a different dynamic to the film overall. Instead of focusing on the horror of the alien’s shape shifting and ferociously killing the research team, he understands that when humans revert to sheer basic instinct, that element can be just as frightening as an alien creature. Aside from that aspect of the film, the creature is downright soul-shaking. Not only is it skin crawling to look at but the sound design of the alien is what will truly haunt your nightmares. While it is one of the most visceral appearances a creature has had on screen, the sounds that it makes when it’s shape shifting or even just when it is moving around the facility is ear rupturing. It is a disgusting mix of the visual and the audible. Carpenter’s dedication to making sure that the alien was not only visually but audibly creative is just one of the things that makes this film timeless and unforgettable.

Aside from the horror aspects, the film relies heavily on its ensemble to do a good portion of the leg work. Creatures can be scary all they want to be but if the actors lack the ability to sell their fears of them, then the audience won’t feel frightened either. Comprised of legends such as Kurt Russell, Wilford Brimley, T.K. Carter, and Keith David, the group of actors involved in “The Thing” are both stellar and ridiculously exciting. The actors are not only good at selling just how afraid they are of the creature but they also all play off of each other very well, specifically when it comes to trying to decipher who is actually who they say they are. From the interactions in the arguments to the smaller moments that some characters share when it comes to the more emotional and difficult aspects of the situation, they find themselves in, the ensemble shines

“The Thing” is a timeless masterpiece that is going to forever be discussed in both critics circles, groups of film fans and film schools and not just in the realms of horror. Carpenter’s mastery of both the psychological and body horror found within “The Thing” is done better than when some directors focus on just one of those aspects. Carpenter’s career is legendary enough, but with a film like “The Thing” added to his already ridiculously impressive resume, he truly earned the title of horror maestro.