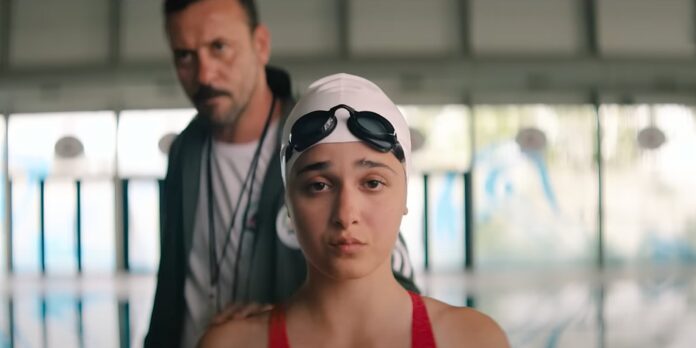 THE STORY – Years after her happily ever after, Giselle, Robert and Morgan move to a new community and Andalasia and the real world are thrown off-balance.

Every time the Olympic Games come around, they come with a new boatload of triumph-over-adversity underdog tales to get viewers emotionally invested in the athletes’ journey. Some of them are medal contenders, and some of them are just grateful to be there. Some of their stories are well-trod tropes (serious injury/illness, death of a family member or coach, struggles with being thrust into the spotlight), and some are genuinely shocking. The story of Yusra Mardini, who fled her Syrian home near Damascus with her sister Sara in 2015, pulled a dinghy of over a dozen people for three hours across the Aegean Sea, and made her way to Germany to seek asylum before competing at the 2016 Summer Olympics under the newly-created banner of the Refugee Olympic Team is undoubtedly one of the more jaw-dropping of these stories. It is a story that positively screams to be adapted into a film, and yet Sally El Hosaini’s “The Swimmers” – a Netflix production chosen as the opening night film of the 2022 Toronto International Film Festival – only occasionally feels like the best version of itself.

The problem largely comes down to El Hosaini’s screenplay, co-written with Jack Thorne. Presented with a real-life story that essentially boils down to an underdog sports drama wrapped around a refugee survival drama, “The Swimmers” tells Mardini’s story in a linear fashion. We follow Yusra and Sara from hardcore training under their father’s watchful eye to their desperate bid to escape the Syrian Civil War, from their difficult journey across Europe to Yusra’s return to training and eventual Olympic bid. Unfortunately, this can’t help but feel like two very different films somewhat inelegantly stitched together. Each is fine on its own – the sports drama is energizing and uplifting, the refugee drama is harrowing and emotionally draining – but put together in this way, they create a whole that feels less than the sum of its parts. At a certain point, the story stops being about the Mardinis’ journey as refugees and begins being about Yusra’s Olympic dream again, and while El Hosaini makes some impactful filmmaking choices to connect the two storylines (the most successful being the moment when Yusra, struggling in the dark open waters of the Aegean Sea, visualizes her path ahead as a lane in a pool before dragging the dinghy of refugees to land), the film’s last third feels almost wholly disconnected from its first two. This results in an ending that, while uplifting in a generic way, feels robbed of much of its poignancy. A less linear, more flashback-heavy structure could have helped the film feel tighter and more emotionally impactful.

However, much of the screenplay leaves to be desired, though there is no denying the strength of the film’s central performances. Nathalie and Manal Issa, as Yusra and Sara, respectively, are both incredibly engaging performers, and their real-life sisterly bond adds an extra layer of authenticity to the film. While their roles are a bit generic on the page – Sara has wild curly hair, Yusra has clean straight hair, and their personalities follow that – each adds something to bring the sisters to vibrant life on screen. Manal has a spiky energy that can turn on a dime from joy to anger, while Nathalie has an openness to her face and purity of intention that ensures Yusra never comes across as a wan goody-two-shoes but a woman who is carrying the weight of not just her father and her family, but of a whole community on her shoulders. Both actresses navigate their character arcs with aplomb, and their physical commitment is impressive.

The thing that ends up pulling the film out of pure middlebrow mediocrity is the apparent passion on display. Both Issa sisters clearly relish the opportunity to tell this story, and El Hosaini directs the film’s middle section (the journey of the refugees) with fire in her belly. While the limits of digital cinematography still show up to distract on occasion (in numerous shots, the edges of the frame look distorted), there are multiple shots that are memorably breathtaking: A missile landing in a pool and slowly sinking right in front of Yusra, an outdoor club in Damascus where the rocket fire in the background takes on the feel of laser lights or fireworks, an ever-expanding sea of orange life vests left behind on the beach where the refugees land. “The Swimmers” may not be the best version of itself, but that doesn’t mean it’s not good. There’s plenty to like here, and it still works – Yusra’s Olympic qualifying heat is a genuinely cheer-worthy moment – but it’s hard not to feel as though it could have been even more impactful if the screenplay had tied its story threads together more tightly. When coaching Yusra, the girls’ father (Ali Suliman) says: “Find your lane. Swim your race.” “The Swimmers” doesn’t quite find its lane, but it swims a good race anyway.