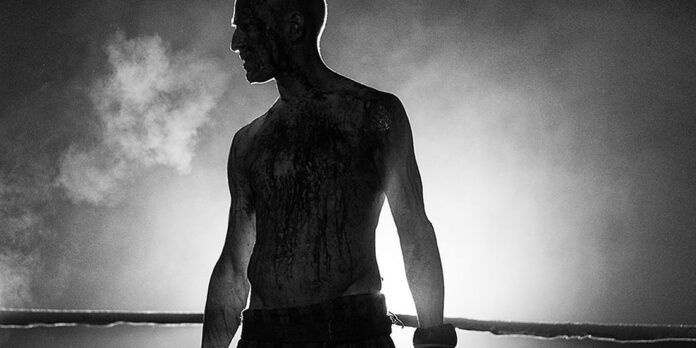 THE STORY – Post World War II, Harry Haft is a boxer who fought fellow prisoners in the concentration camps to survive. Haunted by memories and guilt, he attempts to use high-profile fights against boxing legends like Rocky Marciano as a way to find his first love again.
​
THE CAST – Ben Foster, Billy Magnussen, Danny DeVito, Vicky Krieps, Peter Sarsgaard & John Leguizamo

​​Six million people died in the Holocaust. Each of them had a different story, yet so many films about the Holocaust feel the same – the idyllic life before, the terror of the camps, the questioning of God, the agony of losing friends and loved ones, the relief and later guilt of surviving. Despite covering all of these same beats, Barry Levinson’s “The Survivor” feels different, in large part due to the uniqueness of the true story it’s telling.

Harry Haft (Ben Foster) was a light heavyweight boxer who fought professionally between 1948-1949, with a record thirteen wins and eight losses. But before emigrating to the United States, he won seventy-six fights in the concentration camp of Jaworzno (a coal mine north of Auschwitz) against his own people in a sadistic game organized by an SS overseer (Billy Magnussen) as entertainment for the German military personnel. It’s as harrowing a story as one could imagine, and the film, scripted by Justine Juel Gillmer, smartly avoids feeling like exploitation by structuring itself as a boxing movie, focusing on the leadup to Haft’s fight with future champion Rocky Marciano and its aftermath, with the Holocaust story playing out in flashback.

The film’s biggest problem is one that it shares with a lot of Holocaust dramas: the last act is too long, meandering a bit before finding the point of its story and resolving. It’s an understandable problem – how do you make sense of genocide? How do you make sense of life after surviving such horrific things? Following a character as they work their way through these questions makes sense even as it softens the impact of its story by dragging it out so long past the climax. But “The Survivor” has something those other films don’t: Ben Foster. The actor has been building up quite a career of great performances that awards bodies have sadly overlooked, but that should change with this. Between the physical transformation (Foster lost and gained back sixty pounds to play Haft at different stages of his life), accent work, and emotional intensity, this is the most demanding part Foster has ever had, and he responds with the best work of his career. The screenplay asks a lot of him, not just the physical challenge of the boxing scenes, but in the complex emotions he has to work through in each of the three stages of Haft’s life covered in the film. There are the scenes at the camps where he has to dig deep into the mental and physical pain of fighting for his life while knowing that he is sending his brothers to their death. There are the scenes in America in 1949, where he has to balance the conflicting motivations of not wanting other survivors to know what he did to his own and wanting desperately to make a name for himself in hopes of finding Leah, the girl he was in love with before they were both sent to separate camps. And then there’s the epilogue-like last act in the 1960s, which provides a one-two punch of revelations that deepen Haft’s pain even further as he tries to raise his son. Foster rises to the occasion spectacularly, nailing the accent and keeping the higher-pitched emotional outbursts from exploding into overcooked melodrama. The actor’s physical work is even more impressive, his walk suggesting both the swaggering machismo of a boxing champ and the haunted introversion of a survivor of significant trauma.

Levinson is perfectly in tune with his leading man, keeping the film from getting too overcooked even when it seems like it will fly off the rails. He perhaps keeps things on too much of an even keel in the last act, letting the pace lag for too long to make the last emotional gut-punches land as hard as they should. But everything before is as classically well-made as Hollywood filmmaking gets. The production and costume design put you right in the middle of each setting, while Hans Zimmer’s score is used sparingly to underscore the big moments and guide scene transitions. There’s even some comic relief (in the form of Danny DeVito as Marciano’s cornerman, who helps Haft out of a sense of respect and obligation as a fellow Jew) to ensure that the film isn’t too depressing and disturbing. Levinson directs the boxing scenes with verve, making sure the ones in America recall the visceral terror of those in the camps without giving into it completely. He’s aided immeasurably by cinematographer George Steel, who filters the light in the black & white flashbacks in a way that gives them the glow of old photographs from the era. It looks gorgeous but still appropriately dirty when necessary, never glamorizing the camps. The color cinematography in America feels naturalistic while making some striking use of noir-style shadows as the film builds towards the boxing matches. The camerawork in the boxing matches bobs and weaves with the actors, and the sharp editing keeps the action visually coherent.

Foster remains a strong anchor through it all, and he’s supported by an excellent (if slightly overqualified) ensemble. Vicky Krieps is a warm presence as Miriam, a worker at an organization who Harry hopes will find Leah, as her growing attraction to Harry slowly becomes mutual. DeVito is an always welcome presence (especially when he keeps his hanker instincts in check, as he does here), as is Peter Sarsgaard as a journalist who wants to write about Harry’s story. If there’s a standout, it’s Magnussen as the pragmatic but sadistic SS officer who recognizes Haft as a way to make a name for himself (and some good money). His classically Aryan looks make him a no-brainer casting choice, and he brings just the right amount of crazy-eyed fervor to his performance to not come across as a caricature. But this is Foster’s show through and through, and with that performance to build a film around, it would be hard for “The Survivor” to fail. That it succeeds as thoroughly as it does even with the third-act problems is a testament to the strength of Levinson’s filmmaking and the power of Haft’s story. It’s a powerful story worth telling, and the film does justice to its real-life inspiration.