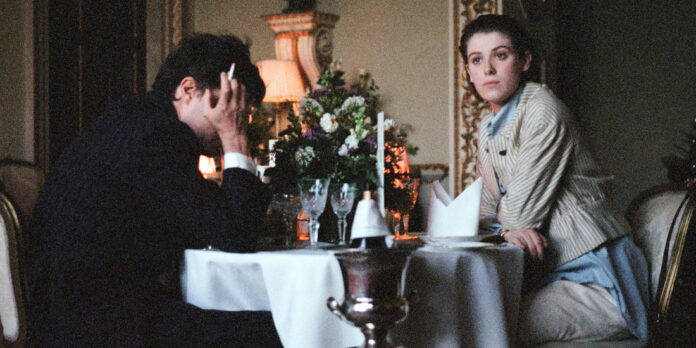 ​I always find myself a bit cautious when it comes to seeing films set against the backdrop of filmmaking. That’s because, even with the best of intentions, it’s very easy for it to become a vanity exercise in which naval gazing is contorted into shallow thematic meaning. It takes great skill to avoid that deadly cliff and create something that takes place in that world and say something that doesn’t come across as pretentious. There are several points where this particular film falls into that trap, but thankfully, the direction and performances lift it up and manage to turn it into something quite special.

The protagonist of the film is Julie (Honor Swinton Byrne), a young film student in England during the 1980s. She’s on a path to make her own feature film while dealing with a number of internal and external obstacles in her path. At the forefront is Anthony (Tom Burke), a charming yet manipulative man who begins a toxic relationship with her that is fueled by a barrage of lies and his heroin addiction. There is her mother, Rosalind (Tilda Swinton), who manages to stay supportive but always to a point. And then there is Julie’s own constant struggle of self-doubt that she pushes through in order to gain more confidence in the things she wants, be that artistically or personally.

The first thing that immediately comes to mind when watching the film is the immense care and effort that director Joanna Hogg puts into the piece. Her stoic yet intimate framing accomplishes so much in terms of inviting the audience into the close proximity of its characters and into their relationships. Her hand can channel the warmth when enveloped in a carefree world, as well as a sinister chill when the light turns dark. In truth, much of the film’s style evokes the sense of Stanley Kubrick, though with not quite the emotional distance. It is a pretty astounding feat of filmmaking, and I am wholly impressed by Hogg’s efforts.

As much as I do praise the direction of the film, the script is where I did struggle. The plot moves at a laborious pace at many intervals, and most of that falls onto a screenplay that is built upon droll anecdotes of ostentatious musings and witticisms. Mind you, the film is totally aware of this atmosphere and does understand the pointed commentary it’s making about such people. At the same time, one can’t help but feel the overindulgence, and it continually adds to a dragging pace the film suffers from. Despite the engaging direction, there are moments when even the confident hand of a talented filmmaker doesn’t elevate the sometimes drab material.

Byrne has a capable screen presence and does a credible job at grounding this film around her central performance. She portrays a young woman who is navigating a world that is becoming increasingly conflicting to work within and seeing her go through those battles, with differing levels of success, is a pleasure to watch as Byrne shows in her performance. Burke is also a standout, giving full depth to a character that, on the surface, is pretty despicable. Still, it is admirable how much his smarmy charm actually punches through, and it helps to give the character a great deal more pathos. His antagonistic ways never subside, but there is a tenderness to him that Burke delivers well, even when Anthony’s method is more manipulative that it would appear.

The supporting players are a well-established group, though not too many names that a general audience would be aware of. The headliner among them is Swinton, one of my personal favorite working actors and someone I wish that film had utilized more. Julie’s mother is not meant to be central to the story, but having an actor of Swinton’s caliber makes it disappointing when her screen time is severely limited. What she does is effective, but there was potential for her to serve the story in much greater ways. The only other standout amongst the cast is a brief appearance by Richard Ayoade, who in tantamount to a cameo role steals the scene with campy charisma and a deviously playful attitude. His time is brief but quite memorable

The film certainly isn’t without its flaws, and much of that comes from a screenplay that struggles to find a way out of many laborious setups that grow more and more tedious as the film goes on. At the same time, it is a testament to Hogg’s strong direction that it still manages to find an engaging place to be in. Her strong direction of this material makes up for the lacking cohesion in the script, and aided by solid performances in the entire cast, it helps to elevate the film even more. Overall, this is an intimate character study from a filmmaker I eagerly await to see more work from.