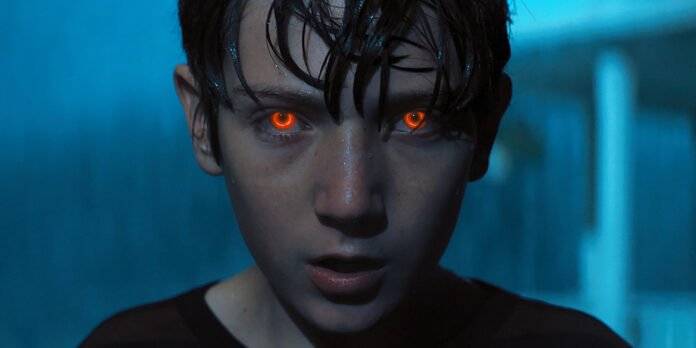 THE STORY – What if a child from another world crash-landed on Earth, but instead of becoming a hero to mankind, he proved to be something far more sinister? With Brightburn, the visionary filmmaker of Guardians of the Galaxy and Slither presents a startling, subversive take on a radical new genre: superhero horror.

​​​​​​​Sometimes, you get the sense that a movie was greenlit simply based off of its pitched premise. “The Purge” and “Captive State” are two recent examples I can think of that fit this description. And now, I can add “Brightburn” to that list and like the other two mentioned films, it also does not meet the full potential of its premise. Instead, it delivers a standard dose of genre fare without reaching for the skies and squashing our expectations.

What is the premise you ask? Well, it is…”What if Superman came to Earth and instead of using his powers to do good, he used them to do evil as a pre-teen boy?” Now, in “Brightburn,” the name Superman is never mentioned. These are not the Kents. Instead, the story follows the Breyer family played by Elizabeth Banks, David Denman and Jackson A. Dunn as the extraordinarily gifted young kid who can fly, shoot hot beams out of his eyes and squash anything with his inhuman strength. “Brightburn” refers to their small town of Brightburn Kansas where the story takes place and the story never goes beyond a few small people in this tiny town. For as such as a destructive force as Brandon is, this is not a story about world domination. It’s a story about a family and their son. Tori and Kyle Breyer are unable to conceive and they believe Brandon was sent to them as a miracle. As such, they are overly protective of him and give him the benefit of the doubt at every turn, until strange occurrences and acts of violence start taking place which are all linked to their son.

Many people turned up at the theater to see this movie, thinking that James Gunn, the creative force behind “Slither” and the “Guardians Of The Galaxy” films was either writing or directing this. However, he is merely a producer on the film and the writing duties are handled by his brother Brian and cousin Mark Gunn, while newcomer David Yarovesky sits in the director’s chair. As stated before, outside of few “wink wink, nudge nudge” moments (It’s not a coincidence that Brandon is probably named after Superman actor Brandon Routh), “Brightburn” is not a whole lot of fun nor is it ever dramatic enough for us to take it seriously. It’s stuck somewhere in-between where it does not manage to leave a lasting impact. The emotional connection that we are supposed to grasp onto is the one between Brandon and his parents but the story plays out exactly as you would expect, without any originality or surprising twists to subvert our expectations. This leaves “Brightburn” feeling perfectly adequate but never as special as its protagonist.

There is some cool imagery, with Brandon floating around and wearing a terrifying mask that highlights his red eyes, matched by his red cape which is really a red blanket from his bed. However, the film has a hard time finding the balance between the dark horror it wants to portray (the film is gorier than you probably suspect heading in, but it’s never genuinely terrifying) and the more comedic aspects in regards to how absurd the premise is. As a result, “Brightburn” does not come off as meta, or self-referential to the Superman legacy but instead, it presents itself as a cheap B-level run of the mill horror film with nothing really important to say. Suffice to say, for such an attractive premise, which could have greenlit a few sequels had this film really blasted off, I was left disappointed.

Powered by JustWatch
Share
Facebook
Twitter
Copy URL
Previous article
Do The Cannes Award Winners Help Us Predict The Oscars?
Next article
Career Look: Is Jennifer Lawrence The Actress Of The Decade?