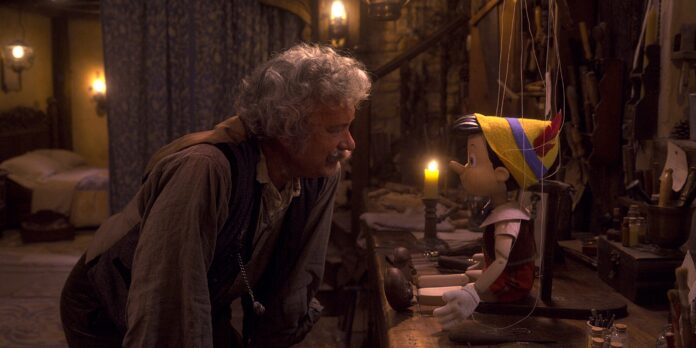 THE STORY – In an Italian village, the wooden puppet Pinocchio is brought to life by the Blue Fairy and seeks the life of adventure while striving to be a real boy.
​
THE CAST – Tom Hanks, Benjamin Evan Ainsworth, Joseph Gordon-Levitt, Keegan-Michael Key, Lorraine Bracco, Cynthia Erivo & Luke Evans

There’s a lot for film lovers to complain about nowadays, from the death of the mid-budget movie to the overabundance of superhero films and more. But one of the worst trends that currently plagues Hollywood is the dreaded Disney live-action remake. Ever since Tim Burton’s flaccid adaptation of “Alice in Wonderland” conned its way into being a blockbuster, despite being the ugliest film ever made, the Mouse House has been churning out lifeless recreations of their own classic animated films. The latest is the unimaginative reimagining of “Pinocchio,” directed by Robert Zemeckis. Much like Burton, Zemeckis’s most recent crop of films display a fraction of the creativity the director showed in his earlier movies. “Pinocchio” continues this trend of cynical, inspiration-free filmmaking from the director of “Back to the Future” and “Who Framed Roger Rabbit.”

“Pinocchio” is a familiar fable that has permeated culture in countless ways; wishing upon a star, a liar’s growing nose, and other memorable parts of the timeless tale have taken on a life of their own outside of the story. This interpretation – the most recent of many modern film versions – draws upon the 1940 animated film, reusing songs, images, and specific aspects from Disney’s famous adaptation.

It’s so devoted to recreating the 1940 film that several instances exactly copy moments of animation and character movement from this film’s predecessor. On the other hand, new characters and story beats have been shoved into the story, along with original songs that don’t match the style or tenor of the nearly-century-old tunes. This unharmonious meshing of old and new practically serves as a thesis statement for Disney’s live-action remakes: they’re servile in their repurposing of parts from the original films, seemingly out of fear of audiences feeling betrayed, while also attempting to insert new and inferior features to appear fresh awkwardly. Inevitably, rather than working together to create an interesting spin on well-known material, these films come across as cynical, nostalgia-minded corporate creations intended to get new eyes (and, therefore, new revenue streams) directed at older properties.

Perhaps even worse than the graceless merging of content from yesterday and today is the lackluster visuals. For a studio as all-consumingly successful as Disney, it’s shocking how poor their computer-generated images often look, and the visual effects in “Pinocchio” are no different. From the very first scene, which shows the elderly woodcarver Geppetto (Tom Hanks) interacting with a CGI cat, fish, cricket, and puppet, it’s apparent that this film will be oversaturated with underproduced characters and environments made up of ones and zeroes. The movie seems burdened by these CGI creations rather than using them to put to film what would otherwise be impossible. This is most notable in an early scene with the Blue Fairy (Cynthia Erivo), who appears to be stuck in the frame and isn’t allowed to move around in a way that might typically be expected of such a magical being. The film is full of awkwardly shot and composited computer-generated characters, which gives the film an unfinished, unpolished quality. For a story that’s all about exploring a fantastical world where everyday humans interact with animals and objects given wonderous sentience, the lack of magical ingenuity rings especially false and feels sad.

The one bright spot in this otherwise dim affair is Hanks, who shows just how much of a total pro he is. It’s hard not to feel somewhat sorry for such a talented actor being entombed in a green screen hell, presumably acting with tennis balls rather than any actual human beings. But he still manages to bring an excited, entertaining energy to the eccentric character. As for the titular puppet himself, the young actor who provides his voice (Benjamin Evan Ainsworth) does an endearing job. But Pinocchio’s voice sounds so distant and detached from what’s happening on screen in terms of motivation and conversational rhythm as if the characters speaking to him are talking to Siri rather than a living thing. This isn’t Ainsworth’s fault but rather can be blamed on a lack of clear direction to sell the illusion that the various actors interacting with Pinocchio – and vice versa – are actually having a conversation in the same physical space as the wooden boy.

“Pinocchio” is a dispiriting retelling of what should be an enchanting tale. It realizes and magnifies all of Hollywood’s worst tendencies when it comes to modern blockbuster filmmaking. And worst of all, it looks like this mold is not one Disney is looking to break anytime soon.

<b>THE GOOD - </b>Tom Hanks does his very best, despite having to act against an unending barrage of CGI creations. He's energetic and appropriately eccentric.<br><br> ​ <b>THE BAD - </b>The old elements of the original animated film and the new songs and situations created for this remake doesn't mesh well. The visual effects are lifeless, which is especially ironic given the story is about inanimate objects and animals being given human-like sentience.<br><br> ​ <b>THE OSCAR PROSPECTS - </b>None<br><br> <b>THE FINAL SCORE - </b>4/10<br><br>"PINOCCHIO"