“THE SKY IS PINK” 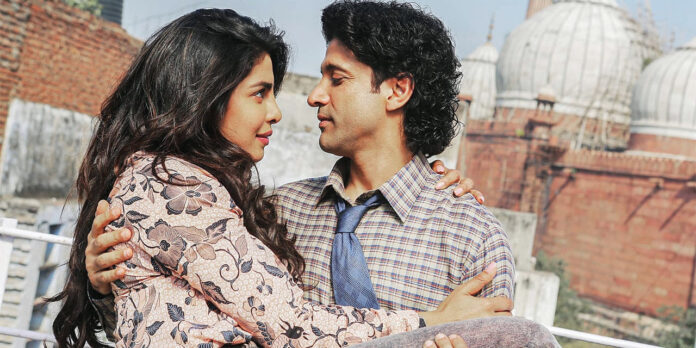 THE STORY – Based on the life of motivational speaker Aisha Chaudhary, who died in 2015 when she was 18. Aisha tells the love story of her parents over a period of 25 years.
​
THE CAST – Priyanka Chopra Jonas, Farhan Akhtar, Zaira Wasim & Rohit Suresh Saraf

Aisha Chaudhary is dead. Get over it. Her words, not mine! “The Sky is Pink” puts its cards on the table right from the jump: Aisha is dead, and her parents have drifted apart. But they used to be very much in love, and Aisha feels that she’s the cause of their unhappiness, so she is going to tell their story, death be damned. This premise – a dead teenage girl narrating the story of her parents’ relationship from beyond the grave – sounds like something that shouldn’t work, too clever and too cute by half. But director Shonali Bose, working from the “detailed narrations” of Aisha’s mother Aditi (a luminous Priyanka Chopra Jonas), threads that needle pretty perfectly, making a film that mixes laughter and tears, love and heartbreak, otherworldly wonder and earth-bound realism in a way that feels true to life.

Aditi and Niren (a swoon-worthy Farhan Akhtar) fell in love and married despite being part of different castes, and stayed married despite Aditi’s turn to Christianity after a spiritual experience. They had a daughter who was diagnosed with severe combined immunodeficiency and died shortly after being born. Then they had a son, Ishaan, who was born healthy. After deciding to not have any more children, Aditi finds herself pregnant, and due to her Christianity does not want to abort the pregnancy. So they have a little girl, Aisha, who ends up with the same diagnosis as their first daughter. But this time, Aditi and Niren do whatever they can to give Aisha a life, including moving to London and then making a long-distance relationship work as best they can. Aisha narrates all of this as the film jumps around in time, giving us an ever-fuller picture of the lives of her family.

Given that we know from the very first frame where this is going, you’d be forgiven for thinking that “The Sky is Pink” is nothing more than a maudlin exercise in emotional manipulation. But it isn’t. For the majority of the film, Bose leavens the tragedy with a surfeit of lightness, sometimes in the form of perceptive character comedy, sometimes in the form of pure and simple love (both familial and romantic). While the tragedy is never far from anyone’s minds (not ours nor the characters’), for large stretches it recedes into the background as something else takes over. Bose, who lost a young son herself, knows from impending loss, and “The Sky is Pink” is masterful in the way that it lets you forget, for only moments at a time, about the tragic end we all know is coming… until it arrives and hits with the blunt force trauma of the best three-hanky weepies.

Oh yes, the last act of “The Sky is Pink” will make you cry. But it earns those tears many times over. Bose tells her story patiently, never fully indulging in the excess Bollywood films have become known for, instead of grounding the story in the characters and their complex relationships and emotions – something else typical of Bollywood films, but less celebrated. And her actors meet every challenge – not a single one of them shying away from the more negative aspects of their characters. Chopra Jonas is the best of them, proving after three years away from Bollywood that she’s still a superstar. In possibly the meatiest role of her career, she is at once fiercely protective of her daughter and intensely vulnerable – when Niren or Aisha hurt Aditi, you fear for both parties involved. Akhtar matches her every step of the way, giving Niren a soulfulness that makes you miss his presence when he’s not on screen. And at the center of it all, Zaira Wasim is supremely lovable as the teenaged Aisha. Wise beyond her years, but never in a too-cute, movie-child way, Wasim brings Aisha to joyous life in the way she deserves.

A lot of people like to throw around words like “sentimental” and phrases like “emotionally manipulative” as if they’re bad things. Like anything, they can be bad things if done poorly. But when these things are done well, the result is a feeling of fullness in the audience that can’t be matched in any other way. “The Sky is Pink” is very sentimental, and it is manipulative. But it does those things superbly well, and when that inevitable final act hits, you know you’re in the hands of a master. Shonali Bose has crafted a tearjerker that stands with the very best of them. If you open yourself up to it, it will pay you back tenfold.