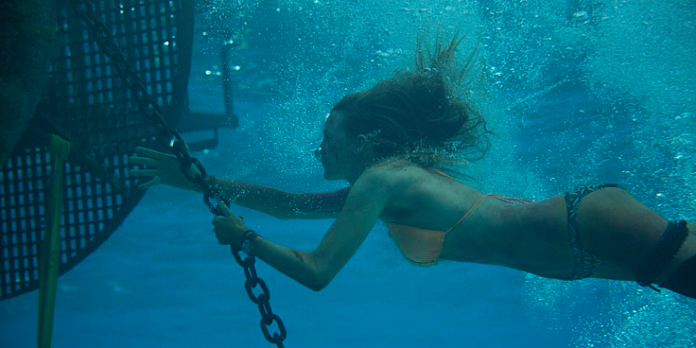 THE STORY – Still reeling from the loss of her mother, medical student Nancy Adams (Blake Lively) travels to a secluded beach for some much-needed solace. Despite the danger of surfing alone, Nancy decides to soak up the sun and hit the waves. Suddenly, a great white shark attacks, forcing her to swim to a giant rock for safety. Left injured and stranded 200 yards from shore, the frightened young woman must fight for her life as the deadly predator circles her in its feeding ground.
​
THE CAST – Blake Lively
​
THE TEAM – Jaume Collet-Serra (Director) & Anthony Jaswinski (Writer)

Sometimes we need to take a break from the seriousness of movies and indulge in a no-nonsense B-movie. “The Shallows” does not have extremely complex characters or themes that will pound you over the head. It does not have a long running time which will beat you into submission. And despite that, it still manages to pack quite a sharp bite with its tense and stripped-down plot of a woman struggling to survive in shallow waters from a man-eating great white shark. It doesn’t break any new ground nor is it a film which you will ever particularly remember, but there’s certainly more good than bad here.

​Nancy Adams (Blake Lively) is a medical student who has recently lost her mother and decides to take a trip to an unnamed island in Mexico to surf the same waves that her mother surfed when she found out she was pregnant with her. While the surf is terrific, the locals friendly and she has found the peace and comfort that she needs, Nancy is in for a rough day. She gets bitten across the leg by a great white shark and is forced to swim towards a rock not far off from the beach but far enough that the shark could finish her if it wanted to. The shark does not remove itself from the area as it has killed a whale nearby which it continuously feasts on while Nancy plans to escape and survive.

The first thing that must be touched upon when discussing “The Shallows” is the performance of Blake Lively who turns in her “127 Hours” performance of an isolated character caught in a life or death situation where the clock is constantly ticking. Luckily, she is a medical student who is resourceful and smart enough that she can will through the terrifying predicament on her own without the aid of another character (Especially the male type). Lively has never been this stripped down and terrified as she appears on screen here, turning in a performance that commands your attention as she shares the majority of the screentime with nothing but a seagull and this killer great white.

Director Jaume Collet-Serra gets so much right in “The Shallows” from a creative standpoint that it’s almost enough to forgive the film for having shallow characters and a shallow story. The use of GoPro footage, slow motion editing, the gorgeous water photography and the sense of time through the showing of a stopwatch’s face on the screen all help to give “The Shallows” a decent amount of style. However, there are a few miscalculations, such as the misguided score by Marco Beltrami (It has more of a pulsing action movie vibe than a soaring, majestic and emotional score to help sell the human element of trying to stay alive) and as said before, a slim story that will have you wondering if the journey was totally worth it or not.

While “The Shallows” is filled with B-Movie thrills that will have audiences screaming in certain parts and trying to catch their breath in others, it is ultimately undone by how stripped down it truly is. Blake Lively gives it her all and turns in what many will say is her best performance yet. The tension and thrills that the film provides will have you on the edge of your seat until you’re not due to some unconvincing special effects and ridiculous character moments. For what it is, “The Shallows” is acceptable and perfectly fine time at the movies to escape. Just don’t expect a masterpiece.