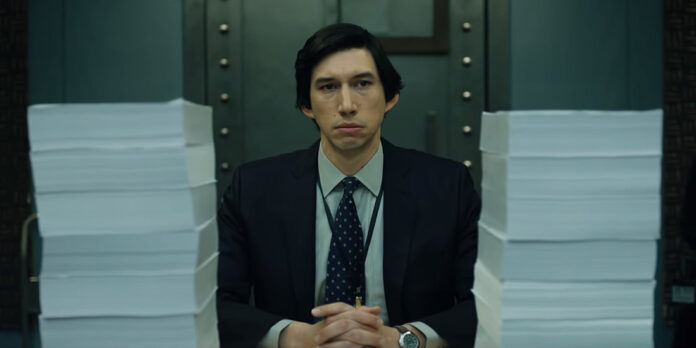 Adam Driver is having a good year. A Tony nomination for his role in “Burn This,” a brilliant performance in Netflix’s “Marriage Story,” a fun performance in the zombie film “The Dead Don’t Die,” and his final time putting on the mask as Kylo Ren in “The Rise of Skywalker” still to come. Add to all of this a solid leading performance in the political drama “The Report,” directed by Scott Z. Burns, as the man who leads the investigation of the CIA’s use of torture in the Middle East and you have a banner year for any actor.

It is no easy task to dramatize the creation of a 6,700-page report, a process that took Daniel J. Jones ten years to do. The film follows Jones (Driver) who was employed by the Senate Intelligence Committee to create a report detailing the use of “enhanced interrogation techniques” by the CIA after video recordings of the interrogations were destroyed. Jones and his small team were tasked with creating the report with nothing but the CIA’s paper records — transcripts, memos, and emails — holed up in a room in a CIA building. As the report got closer to completion, politicians from both parties attempted to suppress its release. Annette Bening portrays Senator Dianne Feinstein, the chair of the committee.

The film jumps around a lot, going between Jones researching, Jones meeting with Senator Feinstein, and depictions of the torture being discussed. The torture scenes are intense and at times difficult to watch, as might be expected. However, they definitely serve their purpose within the film in showing just how brutal the behavior of the CIA was. The film is impressively bipartisan, making clear that while the Republicans may have been responsible for the torture happening, the Democrats were involved in covering it up. It definitely holds the people involved — from the CIA to Cheney and Bush — accountable for their actions.

The script, also written by director Scott Z. Burns, is serviceable and for every line that feels trite, there’s one that’s a zinger (typically, the latter are said by Bening). Aside from the depictions of torture, it is a movie that relies mostly on scenes of people talking, either arguing or explaining things to each other. The direction is similarly good, though not anything particularly remarkable or new. The characters are almost all based on real people involved in the Senate investigation of the CIA and little is shared about them personally aside from their role in the plot. However, while some may disagree with the film’s choice in this matter, it doesn’t feel like a detriment and adding more information could have elongated the movie’s run time which already felt a bit on the long side, despite being only two hours.

Adam Driver is great as Daniel J. Jones, a man who becomes more emotional and obsessed with the project over time. He has an intelligence about him that feels right for a man like Jones. Perhaps most impressively, he manages to make his lengthy explanations engaging with his passionate delivery. He also remains remarkably articulate even when yelling.

Meanwhile, Bening’s Feinstein is the calm to Driver’s storm. Her performance is very dignified but she shines in her more passionate moments. It’s also worth noting that Matthew Rhys plays a reporter in this film, which seems to confirm that between “The Wife,” “A Beautiful Day in the Neighborhood,” this, and to a lesser extent “The Post,” he has a new casting type.

The performances and the story itself are what shines in “The Report,” rather than any of the films’ technical attributes. The editing isn’t distractingly bad, other than the frequent quick cuts between close-ups on words. One clever way that the film differentiates between settings is by the color of the lighting; for example, the scenes that take place in the CIA research room all have a slight blue tone to them. Any artistic issues aside, the performances and the material being dramatized elevate “The Report” and make it a necessary watch for Americans. After a theatrical release, it will be on Amazon Prime at the end of November, which hopefully will help it reach more people. It’s not an easy watch, but it’s an informative and journalistic film that explains clearly the CIA’s Enhanced Interrogation Techniques and what it took to produce the Torture Report with great performances backing it all the way through.