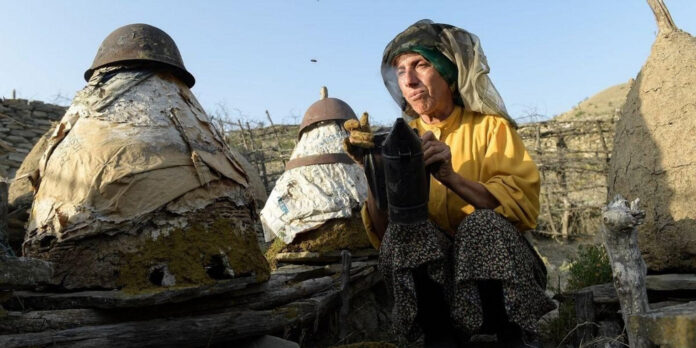 THE STORY – A woman utilises ancient beekeeping traditions to cultivate honey in the mountains of Macedonia. When a neighbouring family tries to do the same, it becomes a source of tension as they disregard her wisdom and advice.

Some documentaries have such a compelling story that one almost forgets that what they are watching is indeed a documentary. We saw this in last year’s “Free Solo” which was a gripping adrenaline ride on par with the likes of “Mission: Impossible – Fallout.” In regards to Tamara Kotevska and Ljubomir Stefanov’s “Honeyland,” the viewer almost forgets that what they are watching is a documentary. The film is truly immersive in every sense of the word, and it isn’t hard to see what all the buzz is about.

It’s a slow, steady film that seems focused on allowing its audience to reach their own conclusions rather than be spoon-fed information. The end result of “Honelyland” is a timeless classic which captures a place that exists outside our western world. The world of “Honeyland” is its own time, where life is less dominated by technology and where people are more entwined with the nature that surrounds them.

What makes “Honeyland” so remarkable is how it isn’t presented to us in the typical documentary format and style; we don’t have any voiceover narration, nor are there any talking heads style interviews. Instead, this is a documentary that unfolds by simply allowing the camera to follow its subject, and the subject here is beekeeper Hatidze Muratova. Shot over three years with over 400 hours of footage being produced as a result, the filmmakers have managed to create a compelling narrative that unfolds in its 90 minutes. Hatidze’s life is examined as she adjusts to the arrival of a new family who threatens the ecosystem of the bees she harvests honey from.

Hatidze lives in a remote village in North Macedonia with her eighty-five-year-old mother, Nazife, who is bed-ridden and nearly blind. The women live in a shack that has clearly seen better days; however, the two women seem happy enough with their secluded and isolated lives, content with only having each other for company. Hatidze is in her sixties, but she is incredibly agile and active, trekking up rocky mountain tops in order to collect her honey from her beehives.

To support her mother, Hatidze travels to a nearby city to sell her honey. When she first ventures into the city, it’s quite a shock for the viewer, as Hatidze looks so out-of-place. We watch her travel around various market stalls trying to sell her honey, and purchasing a box of hair dye so she can dye her mother’s hair. The tender and intimate scenes between mother and daughter are incredibly touching; shot in natural light with their well-lived-in faces illuminated by candlelight. It’s in these tender moments that we feel honored to be witnessing such a private interaction.

Their isolated bliss is disturbed upon the arrival of a Turkish family: Hussein Sam, his wife, and their seven children. The filmmakers manage to capture Hatidze’s apprehension of their arrival by emphasizing the distance between this new family and the mother and daughter. The children seem loud and chaotic, as the parents struggle to maintain order and control. Even the cats look on in curious fear. Slowly, Hatidze creates a bond with the younger children and even teaches Hussein about her business. Her advice is simple enough: Only ever take half of the honey that’s produced by each hive, as that ensures the bees will survive and be able to produce more.

However, like a fable, Hussein ignores Hatidze’s advice and becomes driven only by the amount of profit he can earn from the honey. He doesn’t understand the delicate relationship that Hatidze has with the bees. She treats them with respect and one gets the impression that the bees respect her in return. Hussein and his family seem oblivious to this, and it doesn’t come to any surprise when the bees sting back. Watching the youngest child, barely a toddler being stung repeatedly is grueling stuff, especially when we see her face swollen beyond recognition. The parents’ attention is spread thin.

“Honeyland” is beautifully shot by Fejmi Daut and Samir Ljuma, who both manage to capture the sheer vastness of the land that the story takes place in. The overhead drone shots following Hatidze, as she makes her way up the mountain, give the film a cinematic appearance, but the film’s cinematography isn’t always on such a grand scale. As mentioned, the scenes depicted in the hut have a coziness to them, despite finding it impossible to ignore the underlying tension between mother and daughter. There’s certainly an air of resentment that Hatidze harbors towards her mother, and one gets the impression that if it wasn’t for her mother and the bees, then there wouldn’t be any reason for her to remain in this place.

Overall, “Honeyland” is quite unlike any other documentary that you will see this year. A touching insight into the life of one woman who is the queen bee of her little isolated dominion.  “Honeyland” is a film about responsibility and a sense of duty, whether that be the responsibility or the duty of a parent or a child, or our shared responsibility and duty as human beings to treat the natural habitat that surrounds us with respect. If we can take away anything from “Honeyland,” it’s that there must be a balance in the world. As humans, we can’t simply just take without giving something back. We should all take a leaf out of Hatidze’s book.