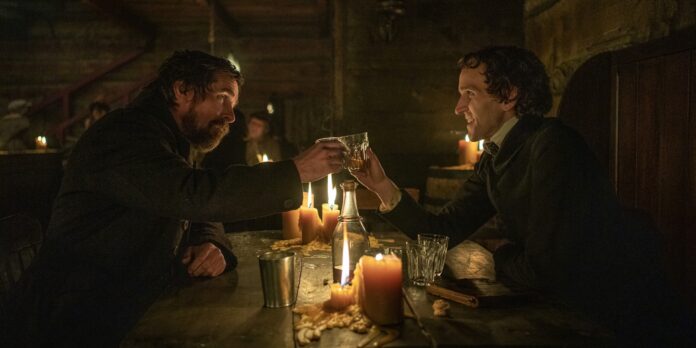 THE STORY – Veteran detective Augustus Landor investigates a series of grisly murders with the help of a young cadet who will eventually go on to become the world-famous author Edgar Allan Poe.

In an age in which it seems every American pop culture icon is getting an origin story – from “101 Dalmatians” Cruella de Vil to “Toy Story’s” Buzz Lightyear and even “One Flew Over the Cuckoo’s Nest’s” Nurse Ratched and “Charlie and the Chocolate Factory’s” Willy Wonka (where Timothée Chalamet will take over the character in a film due to be released next fall) – it was only a matter of time before Gothic fiction God Edgar Allen Poe (and every emo teen’s fave) was given his own, due to the unrelenting interest into his macabre mind and what inspired all the monstrous mysteries he conjured up over his brief life. And though “The Pale Blue Eye,” based on the 2003 novel of the same name by Louis Bayard, is a work of fiction, it was nevertheless still inspired by the time Poe spent at the United Military Academy in West Point, New York in the mid-1800s, rooting itself in reality as much as possible in spite of Bayard’s fictional flourishes. And in doing so, Bayard – and now writer/director Scott Cooper, who has adapted his work for the silver screen – crafts a chilling mystery that would make Poe proud and one that is as intellectually enlightening as it is viscerally exciting.

At the start, our story actually follows the fictional Augustus Landor, played here by a commanding Christian Bale in one of his less physically transformative performances, but one that is no less expertly embodied. Landor, a former constable in New York who has since taken to drinking following his daughter’s disappearance, is called to action after a particularly peculiar murder takes place outside the West Point Military Academy. Cadet Leroy Fry (Matt Heim) has been found hanging from a tree, and though an apparent suicide is not unheard of in a harsh regimen like West Point’s, that’s not what has officials stumped – that would be the fact that his heart has been cut from his chest as well. Landor is tasked with catching the person responsible before another murder is committed, but gathering information is easier said than done in a social culture that thrives on silence. However, after becoming acquainted with a young man by the name of Edgar Allen Poe – who is far more interested in mysteries and the macabre than the military – the two prove to be quite a team and discover that nothing is as it seems with this death.

“A dead body left behind” and “a world-weary detective” are tried and true tropes of the murder mystery genre, so you’re forgiven if you feel like you’ve “seen this all before” from that brief synopsis. But while there are beats in “The Pale Blue Eye” that tread into predictable territory, there are far more that effectively subvert our expectations instead, complicating this case with the addition of a multitude of colorful characters and hair-raising red herrings, most notably in the form of the Marquis family, who have a prominent place in the community – the patriarch, Dr. Daniel Marquis (Toby Jones), is West Point’s resident surgeon. At the same time, the matriarch, Julia (Gillian Anderson), spends most of her days tending to their sickly daughter, Lea (Lucy Boynton), who is pined after by all the boys at the Academy (including Edgar). Their oldest son, Artemus (Harry Lawtey), is another student at the Academy who might know more than he’s letting on. A murder mystery is always at its best when it’s padded out with so many perplexing players who all could have had a hand in the central crime, and “The Pale Blue Eye” doesn’t let us down there, avoiding the obvious initial conclusion – that Leroy Fry’s death was a suicide caused by the Academy’s strict practices – and taking us into darker depths.

But the best part of the film is by far and away the budding companionship between Landor and Poe, who begin as partners but quickly become friends as well, finding a connection with another that they’ve failed to cultivate with anyone else in this lonely world following their own personal plights. Bale could play Landor’s intellectual exhaustion in his sleep. Still, he luckily adds more specificities to his character and the story throughout before being given even greater material to mine in the film’s third act that truly allows him to flex his acting finesse. However, it’s actually Melling who leaves the largest impression, so authentically immersing himself in the part of Poe until the line between the two begins to blur, and we only see Edgar onscreen. In a lesser actor’s hands, it’s easy to see how this characterization could’ve devolved into caricature – Melling makes use of an exaggerated accent and purposely plays into all of Poe’s eccentricities – but Melling holds onto Poe’s heart through this all too (figuratively and literally), finding the earnestness beneath this eccentricity as mentioned earlier and turning him into a tragic figure whose intellectualism and romanticism go hand-in-hand (explored most efficiently with his burgeoning attraction to the ultimately unattainable Lea Marquis). Landor may be our de facto protagonist, but Melling’s Edgar Allen Poe makes the movie.

The film is a treat on the technical front as well, thanks to both Masanobu Takayanagi’s cold and crisp cinematography (reteaming with Cooper after his winning work on “Out of the Furnace,” “Black Mass” and “Hostiles“) and Cooper’s direction, which is as disciplined as ever, achieving a thrilling tonal consistency that rarely lets up (only occasionally in the second act as the endgame becomes a bit more clear, or so we think). As with most Edgar Allen Poe mysteries, the simplest solution is rarely the right one, and that old adage holds true here too, where Cooper and co find a way to upend our story entirely with an exceptionally scripted and acted epilogue that recontextualizes this tale and muddies the morality of what we had once thought its messaging was, offering a less conventional yet still thematically coherent conclusion. It’s because of this epilogue – and the committed character work from Bale and Melling – that “The Pale Blue Eye” will procure a place for itself in film discourse as fans pick apart all the nitty-gritty details that Cooper suffused throughout his script to lay the groundwork for his fascinating finale. That kind of thoughtful writing is what makes “The Pale Blue Eye” stand out from the crowd overall. You may start the film by saying you’ve seen this all before, but by the end, Cooper makes it clear that you haven’t seen anything yet.

<b>THE GOOD - </b>This is a genuinely gripping whodunit that takes what could've been a stereotypical set-up and subverts our expectations repeatedly until the thrilling final scene. The mesmerizing Harry Melling plays the part of Edgar Allen Poe to perfection, holding his own against a commanding Christian Bale.<br><br> <b>THE BAD - </b>There's a stretch where the plot treads into predictable territory and can't always keep up its subversion (until saving itself with an effectively shocking ending), and the pacing lags at points.<br><br> <b>THE OSCAR PROSPECTS - </b>None<br><br> <b>THE FINAL SCORE - </b>7/10<br><br>"THE PALE BLUE EYE"