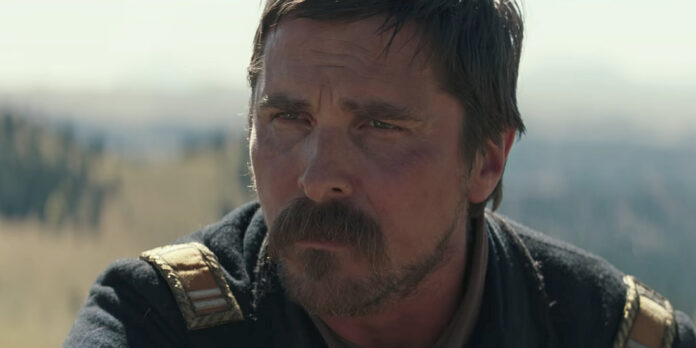 THE STORY – In 1892, legendary Army Capt. Joseph Blocker reluctantly agrees to escort a dying Cheyenne war chief and his family back to their tribal land. Embarking on a harrowing and perilous journey from Fort Berringer, N.M., to the grasslands of Montana, they soon encounter a young widow whose family was killed on the plains. The travelers must now band together to survive a punishing landscape that’s crawling with hostile Comanches and vicious outliers.

​​I’m going to make a very bold claim right now. I think “Hostiles” might be the bleakest and most depressing movie I have ever seen, taking the title from “House Of Sand And Fog” (2003). Shrouded in death and misery, Scott Cooper’s brutal look at the Western is not romanticized nor is it filled with a single smile or laugh. It is a rough time for a director who relishes in telling us rough stories about rough men (“Crazy Heart,” “Out Of The Furnace” & “Black Mass”). Reuniting with Christian Bale once again after their collaboration on “Out Of The Furnace,” Cooper pushes himself as a director and storyteller with “Hostiles.” However, the overall experience is neither a joyous one nor one that we can take away any lessons from, for by the time Cooper gets to the neat/happy ending that is supposed to make the preceding two hours better, it is simply not enough.

It’s 1892 in the American West. A legendary Army Captain named Joseph Blocker (Christian Bale) with a horrific past and a history of violence towards Native Americans, reluctantly agrees to escort a dying Cheyenne war chief (Wes Studi) and his family back to their tribal land on order from the President of the United States or risk losing his job and pension from the Army. With a team that includes Lieutenant Rudy Kidder (Jesse Plemmons), Master Sergeant Thomas Metz (Rory Cochrane), Corporal Henry Woodson (Jonathan Majors making his film debut) and Private Philippe DeJardin (Timothee Chalamet), they begin a dangerous trek across state lines from Fort Berringer, N.M., to the grasslands of Montana. Along the way, they encounter a young widow (Rosamund Pike) whose family was killed on the plains by a dangerous group of Comanche. Despite their differences, everyone must overcome their hatred for each other and work together if they are all going to survive the journey.

Christian Bale’s performance as a respected soldier with a heart of hatred and a past filled with violence, is one of the best performances the Academy Award Winning actor has ever given. Quiet, seething and filled with anguish, his portrayal of Captain Joseph J. Blocker is one wherein a different time filled with less death and misery, his character would never break. But at this time, in this movie, Blocker cannot block out the sheer horror of all that has followed him his entire life and the emotional breakdowns that Bale puts up on the screen are nothing short of astonishing. Also very good is Rosamund Pike as a tortured woman stricken with unimaginable grief, whos only comfort comes from the strength of Blocker. It’s these character’s persistence in the face of such unimaginable pain and suffering, that gives the performances their power over us.

However, despite the performances, excellent sound design (The gunshots have some terrific impact) beautiful cinematography and score by Max Richter, the film suffers (A lot of suffering in this film) from a slow pace that is meant to be meditative on the themes of violence and death but unfortunately becomes too much for the audience to bare. By the time the film reaches its third act, writer/director Scott Cooper attempts to give us a happy ending that neither feels earned nor in keeping with the themes of what he has continuously hit us over the head with before. The film’s structure also doesn’t leave room for much excitement as it is nothing but a series of the characters traveling on horseback through the western landscape, they run into trouble, people die, they bury them, repeat. Had the film stuck on a different ending than what we were given, I would’ve admired it a lot more for simply going all the way into full darkness. However, what we are left with is empty, hollow and downright exhausting.

I still think Scott Cooper is on the edge of greatness but after four films, I still do not believe he is there quite yet. He certainly knows how to create some pretty awesome visuals and gets very committed performances from his actors but his writing and storytelling leaves a lot to be desired. “Hostiles” is his best film to date and features a truly magnetic performance from Christian Bale but the depressing nature of the movie and its themes will surely be too much for many to endure. Credit where credit is due though, the West was not a glamorous place as many other movies have made it out to be. Death could come for you at any time from anywhere and Cooper certainly nails that feeling of dread and despair.