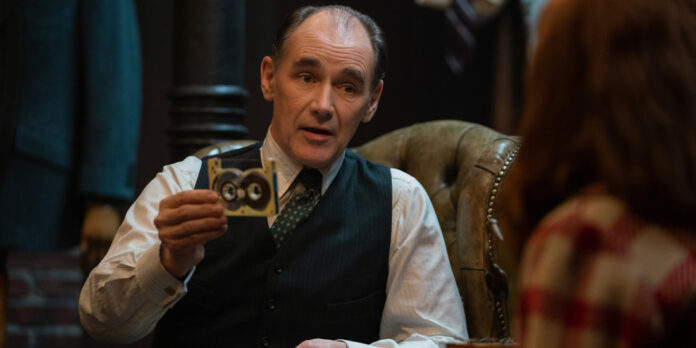 THE STORY – The film follows Leonard, an English tailor who used to craft suits on London’s world-famous Savile Row.

​​Thrillers can always have the potential to be an engaging watch, but there’s something particularly enticing about one which limits its setting to a single location. This obviously presents a host of challenges in crafting a story that can keep its suspense at the same pace while also presenting an experience that still fulfills cinematic ambitions. It can be exceptionally difficult to sustain the action while avoiding a stale and stodgy execution. It’s easier said than done, but the results can be riveting to witness when successfully rendered. That is precisely the conceit at the heart of “The Outfit,” a film that keeps all its pieces moving around a single space and manages to do so with entertaining confidence.

The story is set in late 1950s Chicago, and distinguished Englishman Leonard (Mark Rylance) owns and operates a luxury tailor shop in the city. He takes pride in the work for his clients and even has a tender, fatherly relationship with his assistant, Mable (Zoey Deutch). He also happens to loan out his shop for certain mob operations, mainly as a drop-off site for important messages to be picked up. This task is typically overseen by Richie (Dylan O’Brien) and Francis (Johnny Flynn), the son of the neighborhood’s notorious gangster and his loyal associate, respectively. One evening, plans go horribly wrong, and an injured Richie is brought back to the shop after a fight with another gang. This begins an unfolding of events that reveal mystery, betrayal, and a ticking clock for all parties holding dangerous secrets to be divulged.

With such a narrow focus, it stands to reason that much emphasis would be placed on how effective this ensemble is at anchoring the narrative, and it is no surprise that Rylance would be a capable performer to do so. He embodies a stoic presence that steers into the reserved stature, yet he can also portray an entirely magnetic sense of empathy. He once again shows how his soft-spoken delivery can shroud a deeper enigma, and it emphasizes his dynamic performance. He is a strong core that the rest of the cast revolves around to varying degrees of success. Deutch is capable but sadly doesn’t have much in her role to make her a true showcase. O’Brien exudes an irascible charm, but he plays his role a bit too broadly at times. There is an effective villainous persona that Flynn radiates that is compelling, and an appearance by Simon Russell Beale as the gang’s leader is similarly appealing. However, it’s a well-performed cast that doesn’t quite match the level of its central role but is still pleasant to watch.

Graham Moore has been seemingly absent from the film landscape ever since claiming an Oscar victory for the screenplay to “The Imitation Game,” and here he’s not only back in a writing capacity but also makes his directorial debut. The latter does showcase a skill set that needs polishing, as the filmmaking is what struggles to break free from the stiff theatrical trappings. Despite accomplished cinematographer Dick Pope behind the camera, the film has a flat aesthetic that can cheapen the overall look. Alexandre Desplat’s jazzy score does a lot to bolster the sense of intrigue, but Moore’s own directorial choices are merely a serviceable display.

Fortunately, the screenplay from Moore and Jonathan McClain provides a much more rewarding narrative that crafts an engrossing web of deceit and double-crosses. Given the intimate setting, the tension has to be perfectly tuned to match the small-scale action, and the writing excels at creating a suspenseful environment that is quite captivating. However, some emotional declarations are bluntly delivered, and the rising climax does uncover perhaps one too many twists, which softens the overall impact. At the same time, the story here captures an aura of amusement that propels one to become enraptured by the plot. It is sturdy storytelling that weaves a complicated yet fascinating trail of clues that’s a joy to discover. Each new piece of information dropped along the way is satisfying to track and leaves one greatly anticipating the next provocative revelation.

“The Outfit” does have some missteps here or there that keep it from becoming a truly exceptional work. The stilted filmmaking emphasizes a lackluster style, and not every member of the supporting cast is given equal weight in their characters. At the same time, said ensemble is centered around an alluring performance from Rylance, along with a sprinkling of other charismatic turns. Also, while the directing may be underwhelming, the script layers the mechanisms that drive the momentum forward with delightful fascination. Even when it might take one step too many in exposing its surprises, the film is an absorbing thriller that is easy to recommend.